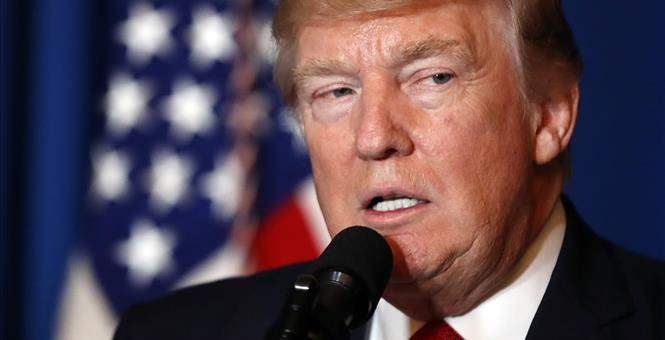 As a monster hurricane not seen on American shores in over a decade bore down on Texas Friday night, a tsunami of news out of Washington was also on its way.

President Trump, in the space of four hours, formally announced a ban on transgender people serving in the military, pardoned a controversial sheriff accused of racial profiling and parted ways with polarizing aide and conservative media darling Sebastian Gorka.

The announcements were made in the evening hours with the nation’s attention focused on Hurricane Harvey, which threatened catastrophic damage to areas along the Gulf Coast, giving new meaning to the Friday night news dump strategy that has long been a staple of Washington politicians looking to bury controversial decisions.

And like many things with Trump, it was taken to an extreme.

“It was very risky because if the hurricane is as bad as the experts were predicting then he’s opening himself up to a lot of potential criticism,” said Alex Conant, a Republican strategist and former aide to Sen. Marco Rubio (R-Fla.). “But very little that Trump does surprises me any longer. He’s proven to be very unpredictable and to not act within the norms of other politicians.”

Like most aspects of Trump’s presidency, the perceived news dump enraged his detractors and buoyed his most ardent supporters while leaving open the question of how it will be received by voters who don’t fit neatly into either camp.

Some Republicans said the timing of the announcements reflected the current state of the White House with new Chief of Staff John F. Kelly trying to instill more order even as the president remains the most disruptive force.

One Republican close to the White House said Kelly appeared to be trying to quietly clean up Trump’s policy move on transgender troops, which had been left in limbo for weeks after the president announced his decision on Twitter to the surprise of the military and with no formal plan ready to be released. While the policy was formally released Friday it did not provide certainty on the most pressing question — the fate of transgender people currently serving — with the presidential memorandum leaving it to the Pentagon, commissioning a new report on how to deal with their fate, keeping open the possibility they may be permitted to remain on active duty.

Gorka’s ouster was expected for weeks after Kelly took over, especially following the departure of his ally, former White House chief strategist Stephen K. Bannon, despite Trump’s fondness for his willingness to go on television and criticize the media. Gorka’s credentials as a counterterrorism expert have long been in question and he was criticized inside and outside of the White House for having no concrete responsibilities beyond serving as a surrogate for Trump on the airwaves. But the move was still expected to draw criticism from Trump’s allies, who view it as the death knell for the populist wing in the White House, making the leak of the news late Friday advantageous for the administration.

Kelly was likely aware there was little he could do to stop Trump from pardoning Arpaio in spite — and perhaps because of — the likely backlash.

“Kelly is really strong right now,” said the Republican close to the White House. “He gives his best advice but he wasn’t going to stop the Sheriff Joe thing. Everything else was textbook what a really good chief of staff would do: dump a whole bunch of stuff when there’s a hurricane coming.”

Democrats and activists groups saw a cynical motive and play and accused Trump of using a natural disaster as cover for unpalatable moves that were aimed mostly at rousing his base and that sent clear messages to the LGBT community and Hispanic Americans that he condoned discrimination.

“As millions of people in TX and LA are prepping for the hurricane, the President is using the cover of the storm to pardon a man who violated a court’s order to stop discriminating against Latinos and ban courageous transgender men and women from serving our nation’s Armed Forces,” Senate Minority Leader Charles E. Schumer (D-N.Y.) posted on Twitter. “So sad, so weak.”

The Arpaio pardon, which Trump foreshadowed at a raucous rally in Phoenix days earlier, was aimed squarely at satisfying his base by rewarding a political loyalist on an issue, illegal immigration, that was central to Trump’s political appeal.

“The President brought justice to a situation where the Obama administration had attempted to destroy a political opponent,” said Rep. Andy Biggs (R-Ariz.). “Sheriff Joe Arpaio made many enemies in the judicial system, the media, and the left because he enforced laws that the federal government ignored. He did right by the law — even as the political consequences continued to mount.”

But among legal experts, the pardon raised disturbing questions about Trump’s willingness to flout long-standing tradition and Department of Justice procedures in a way that undermined the judicial system, said University of Richmond’s School of Law professor Carl Tobias.

“Certainly the pardon seemed principally political and without much thought about the history of that or the procedures used,” Tobias said. “It’s a bigger piece of Trump’s contempt for the judiciary. Every federal judge in the country knows you can’t have those orders violated otherwise the federal court system won’t work. So that’s very disturbing.”

The White House’s balancing act was evident in the president’s own social media feed. Hours after the Arpaio pardon was announced, Trump tweeted confirmation that the federal government had approved a disaster declaration for Texas. Fifteen minutes later, he congratulated Arpaio.

“I am pleased to inform you that I have just granted a full Pardon to 85 year old American patriot Sheriff Joe Arpaio,” Trump said. “He kept Arizona safe!”

Some Republicans, including Arizona’s two Republican Senators who have both recently been in Trump’s crosshairs, questioned the decision to circumvent the judicial process. Arpaio was scheduled to be sentenced in October after being convicted of defying a court order to end the practice of detaining people merely on a suspicion of their immigration status.

Sen. John McCain (R-Ariz.) decried the message Trump sent by pardoning Arpaio, who had been accused of continuing to “illegally profile Latinos living in Arizona based on their perceived immigration status.”

“The President has the authority to make this pardon, but doing so at this time undermines his claim for the respect of rule of law as Mr. Arpaio has shown no remorse for his actions,” McCain added.

As Trump’s approval ratings have fallen to historically lows, however, most analysts expect him to continue making moves that will please his base even if the draw criticism from others.

“The president has great political instincts — he can read the temperature of the public better than almost anyone else,” said Conant. “He is very well aware that his base is shrinking and in a way that explains almost everything he’s done over the last month.”