Wowplus
Home Gossips Lt. Col. Banjo Have you heard of the “Yoruba Biafran?” 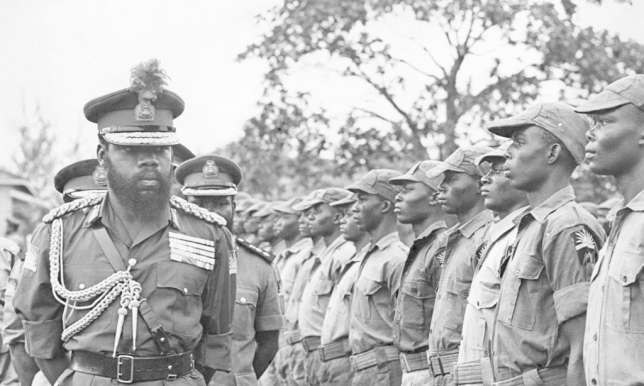 Lt. Col. Banjo Have you heard of the “Yoruba Biafran?”

Banjo almost captured Lagos for the Biafran Army in 1967, and his failure led to his execution.

There are some who believe that Nigeria’s Civil War, fought between 1967 and 1970, is not really a civil war, but a dispute between a set of tribes; Yoruba and Hausa on one and the East on the other.

This assertion does not consider people like Lt. Col. Banjo, the Yoruba soldier who rose among the ranks fighting for the Biafran Army and did so until his death at the height of the war.

Not much is known about Lt. Col. Banjo’s early life. He was born “Victor Adebukunola Banjo” as an Ijebu-man in Ogun State on April 1, 1930.

From Ogun’s foggy towns, he joined the Army as one of a generation of precocious young men in 1953 as Warrant Officer 52.

The records state that Banjo was the sixteenth Nigerian to be commissioned as an officer in the Nigerian Army, (NA 16).

In those days, Nigerian officers were entitled to training in England or nearby countries, by virtue of our colonial tie to Britain.

Banjo was a product of the Royal Military Academy Sandhurst, where he also obtained a B Sc. in Mechanical Engineering.

By the early 1960s, Banjo had risen to become the first Nigerian Director of the Electrical and Mechanical Engineering Corps of the Nigerian Army.

It was the ideal life. He was a young man in his 30s with a young wife and two children.

On January 15, 1966, many of Banjo’s peers executed the decision to take power from the civilian government.

play Banjo’s love for his wife lives in his letters and the accounts of his children. (Abiyamo)

They went on a rampage, killing many national and regional leaders in what we have now simplified into calling the 1966 coup. It is perhaps the most important day in Nigeria’s history.

It is also the day when Banjo’s travails began, the day when life decided to throw him through filters and ask questions that make a man wonder what drives him at the core.

Shortly after Major-General Johnson Aguiyi-Ironsi came to power following the 1966 coup, Lt. Col. Banjo was summoned to the office of the newly-selected Supreme Military Commander and was arrested while he was still waiting to see the Head of State.

Few people can say they understand what happened next but Banjo was accused of planning to kill the Head of State, General Aguiyi-Ironsi and summarily detained.

It has been suggested in accounts of that period that Ironsi was simply caught in the middle. The politics of the coup had been very tribal.

After a team of largely Igbo soldiers had murdered the majority of the North’s leaders, there was pressure on him.

From the North, he was expected to bring the coup plotters to justice. Eastern leaders were pleased that the perceived Northern stranglehold had been broken. Ironsi did not know what to do and the people needed scapegoats.

It was not the first time that matters of tribe would determine the course of his life.

Banjo was detained until the Northern counter-coup in the same year. In a different world, Banjo would have been released. But somewhere in the ripple effects of that coup, Banjo tried to stand up for a Yoruba soldier.

Despite protesting his innocence, he was thrown in jail for the second time. He would stay there until May 1967.

It is often said that adversity brings out the best in men. And while he would have flourished undoubtedly outside the prison walls, it was then that Banjo showed the moral fibre and liberal system of beliefs that would make him stand out at the most trying moments in his short life.

play A rare photo of Banjo and his young family. (Nairaland)

Most of these can be seen in his letters.

According to the book “A Gift of Sequins”, at the time, Banjo had a young family of four children. He did his best to staying touch and improve what was undoubtedly a hard time through constant letter writing.

Banjo’s letters revealed that he had a liberal, non-tribalistic worldview. At the core, he was a man who loved his country and wanted to see his fellow soldiers do much better.

When the Biafra War began, Banjo had been moved to a prison in the East. Colonel Odumegwu Ojukwu, the leader of the new Biafran nation, released him and made him a colonel.

Despite his tribe, Banjo sought to fight for the new country against what he saw as institutional tribalism and genocide.

Later he would say, “However when l discovered the emerging trend that followed the declaration of Independence of Biafra, it became clear to me that a war with the North was imminent.”

“I decided to stay behind and assist in the prosecution of the war, both for the sake of my friendship with Colonel Ojukwu and in the hope that having assisted to fight back the Northern threat to Biafra, he would assist me with troops to rid the Mid-West and Lagos of the same menace.”

There was scepticism to his role in the Biafran Army, but Banjo quickly proved himself to his fellow soldiers and earned their belief.

He proved himself as a master tactician and a fearless soldier, traits that he proved when the Biafran Army attacked Nigeria.

Banjo and his team moved quickly. He was able to capture Benin City in less than 24 hours.

By the time his division took a break, he and his soldiers were able to get within 300 kilometres of the Nigerian capital Lagos.

Something changed when they tried to enter Lagos.

The Biafran offensive on Lagos started heavily and with purpose. Reports of that time say it moved at a “lighting quick speed” but midway, Banjo, along with his fellow commanders, Okonkwo and Major Emmanuel Ifeajuna stopped and turned their army back to Biafra.

On getting back to Biafra, Ojukwu had the soldiers detained.

It is reported that Ojukwu saw their retreat as an act to sabotage Biafra’s existence.

Why they did is not exactly known. Some relations of Ifeajuna have made claims that, as the was war progressed, Banjo and Ifeajuna did not share the idea of a break up of Nigeria.

Their cases were taken to a tribunal. After the first tribunal dismissed the case, a second tribunal sentenced the soldiers to death.

play Many of Ojukwu’s actions during the war have been questioned. (Abiyamo)

“Since then, it has been my fortune to command the Biafran troops on their successful exploits.”

“On the whole, l had in private, told Col Ojukwu that l could never be made to stand charged for having plotted against his office and his person. There was no plot against him”

On September 22, 1967, Banjo, Emmanuel Ifeajuna, and Philip Alale were marched into the Enugu city centre and tied to a pole. A firing squad of Biafran soldiers fired at them.

When Banjo was hit, he reportedly yelled defiantly, “I’m not dead yet!” and he had to be shot multiple times before he died.

Today, the legacy of the soldiers who fought on both sides has been largely forgotten. But in a country where tribal relations are still harsh, Lt. Col. Banjo set a template for living beyond tribe, for the greater purpose of humanity.