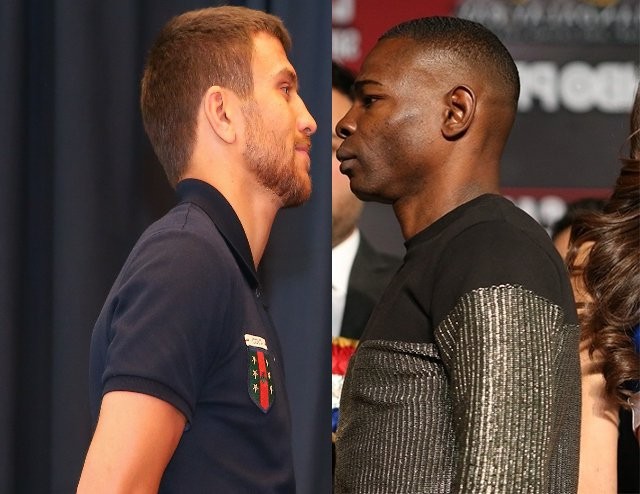 LINCOLN, Neb. — The debate about who is the best amateur boxer of all time often comes down to either Vasyl Lomachenko or Guillermo Rigondeaux, both of whom won two Olympic gold medals apiece during their decorated careers in the unpaid ranks.

Now they both are elite professional world titleholders among the pound-for-pound best, and they likely will fight each other next in what would be a historic pairing.

Two-time Olympic boxing gold medal winners are rare to begin with, and there has never been a fight between two two-time gold medal winners. But their camps are in advanced stages of negotiations to make the match.

Top Rank chairman Bob Arum said to ringside media on Saturday night, following Terence Crawford’s third-round knockout of Julius Indongo to become the undisputed junior welterweight world champion at Pinnacle Bank Arena, that Lomachenko’s next fight would be Dec. 9 in the main event of a Top Rank ESPN card at the Theater at Madison Square Garden in New York.

All along, there have really been only two opponents seriously in the running: Orlando Salido, who handed Lomachenko a close split-decision loss in his second pro fight, and Rigondeaux. Although Arum would not specifically say the opponent was going to be Rigondeaux, it was very obvious that Arum is in talks with his team.

“It would be a historic milestone in my professional career,” Arum, 85, said of the possible fight. “It’s never been done before — each of them winning two gold medals and fighting each other. That’s something special. That will be remembered in history.”

On Sunday, Top Rank president Todd duBoef and Rigondeaux promoter Dino Duva of Roc Nation Sports both told ESPN that Lomachenko-Rigondeaux is the fight that is being worked on.

“Bob Arum is having discussions with Roc Nation Sports and Dino Duva about the fight,” duBoef said.

Lomachenko was 396-1 as an amateur and Rigondeaux was 463-12. In addition to their Olympic gold medals, they also both won two world amateur championships apiece.

Duva said he has been talking to Arum about making the fight since before Lomachenko knocked out Miguel Marriaga in the seventh round of a one-sided fight to retain his world title on ESPN on Aug. 5.

“We are in good, positive, serious talks and hoping it can get done. We’re close to a deal. We don’t have any contracts done yet, and hopefully we can get a deal done,” Duva said Sunday night. “We’re in a pretty good place from all angles, and we’re hopeful we can get it done very soon. I’ve been talking to Bob. We’ve had very good talks. We’re trying to fine-tune the deal to make sure the fighters and the companies are happy. I am cautiously hopeful. It will be a great fight, a great, historic fight.”

Rigondeaux (17-0, 11 KOs), 36, based in Miami, won Olympic gold for Cuba in 2000 and 2004 before defecting and turning pro in 2009. He holds a junior featherweight world title but would move up to the junior lightweight limit of 130 pounds to challenge for Lomachenko’s world title, Duva said.

Lomachenko (9-1, 7 KOs), 29, who is based in Oxnard, California, won Olympic gold for Ukraine in 2008 and 2012 before turning pro in 2013. He won a featherweight world title in his third pro fight, tying the record for fewest bouts needed to win a world title. Then he moved up to junior lightweight and won another title in his seventh pro fight, the record for fewest fights needed to win world titles in two divisions. The December fight would be his fourth defense.

The rap on Rigondeaux is that as skillful as he is, his fights have generally been dreadfully boring, which essentially got him blackballed by HBO, which had no interest in televising his bouts because of their lack of action and entertainment value.

However, Lomachenko is the kind of high-level opponent who could bring out the best in him.

“Rigondeaux is a helluva fighter. He’s not going to be boring with Lomachenko. Lomachenko won’t let him be boring,” said Arum, who used to promote Rigondeaux.

Added Duva: “Lomachenko will make Rigo fight. It will be very interesting. It’s a cool fight.”