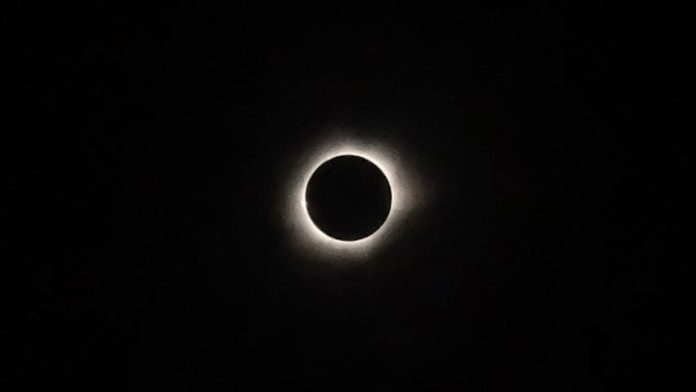 Skywatchers in the United States are preparing for a spectacular eclipse that is without precedent in their country’s 241-year history.

A total solar eclipse will sweep across the nation on Monday, from Oregon on the west coast to South Carolina on the eastern seaboard.

It is the first such eclipse to make landfall exclusively in the US since the country’s independence in 1776.

Total solar eclipses see the Moon slip between the Earth and the Sun.

The Moon’s diameter appears to be the same size as that of our star and so blocks out its light.

A giant shadow cast by this occultation then races across the surface of the Earth, plunging locations into darkness for a couple of minutes or more.

Those not directly under the Moon’s shadow get to experience a partial eclipse which on this occasion will encompass all of North America and northern parts of South America.

There are even parts of western Europe, including the UK and Ireland, that will snatch a sight of the Moon’s disc taking a bite out of the Sun just as it sets.

Wherever people watch the drama unfold, they are urged to take care. Looking directly at the Sun with the naked eye can be dangerous.

The 21 August eclipse is the first since 1918 where the path of totality crosses both the Pacific and Atlantic coasts of the US.

Many commentators believe it will prove to be the most observed, most photographed, and best documented such event in human history.

It will certainly challenge the numbers that saw the 2009 eclipse that swept across India and China.

The US, of course, has excellent transport connections, and this will help many people get into a good position.

As it is, more than 12 million people live on the path of deepest shadow (“totality”). Nearly four times that many live within a two-hour’s drive, and over 200 million live within a day’s drive.

Why are eclipses so rare?

State and local authorities have been preparing for Monday as if they were about to confront the fallout from some natural disaster.

“The eclipse path in the most part avoids the big cities,” said Angela Specks from the American Astronomical Society’s eclipse taskforce. “It skims part of Kansas City and St Louis and then Nashville. But there aren’t any really big cities on the path, and so you’ve got lot and lots of small towns, some of which don’t have hotels. And they’re going to be inundated with people,” she told BBC News.

Carbondale in Illinois has billed itself as the “Eclipse Crossroads of America” because it is in the path of darkness both on Monday and when the next US eclipse occurs in 2024.

Given this status, city authorities anticipate a huge influx of visitors. Its regular population numbers 26,000 people, but for Monday more than 60,000 extra car parking spaces have been organised.

And it is not just urban settlements that will be stretched; the National Park Service has been bringing lorry loads of portable toilets on to its lands.

Many skywatchers will be waiting until as late as possible before deciding where to go, based on up-to-date weather forecasts. Many of those who planned ahead will have consulted historical weather data.

This information suggests the highest probability of clear skies will be in the northwest. Madras in Oregon is a favourite.

The time of year and its position leeward of the Cascade Mountains means it would expect a more than 70% chance of an unobstructed view of the eclipse. In contrast, the further east along the path of totality, the higher the historical probability of cloud.

When is the next solar eclipse in my country?

Find out by playing with our calculator

The Moon’s shadow then races across the continent through 13 more states (less than two square kilometres of the extreme southwest of Iowa is in the path) – a journey that will take roughly 90 minutes.

The place that will experience the longest period of totality (2 mins, 40 sec) is about 10km south of the city of Carbondale, Illinois.

The last region in the path of deepest shadow is South Carolina. The Atlantic coastal city of Charleston experiences its eclipse at 14:47 local time (18:47 GMT; 19:47 BST).

It is around this time that Europeans will be catching their partial view of the event.

Ireland, Northern Ireland, northern England and Scotland see a full partial eclipse. In Belfast, for example, this partial starts at 19:37 BST and ends at 20:23 BST.

Southern England sees the moon start to take a chunk out of the Sun just as it goes over the horizon. Skywatchers will want to make for high ground and pray that any cloud clears just at the right moment.