LIVE: Barcelona turn to Eriksen after being warned off Coutinho 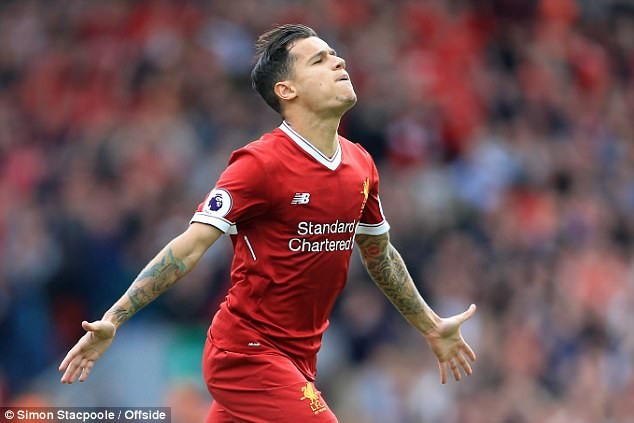 Julien Laurens warns that the reports of Kylian Mbappe being set to join PSG are still unsubstantiated at this time.

Barcelona’s search for Andres Iniesta’s replacement could lead them to Tottenham playmaker Christian Eriksen now that their pursuit of Philippe Coutinho looks set to end in failure.

Liverpool released a firm hands-off statement on Friday, warning Barca that Coutinho “will remain a member of Liverpool Football Club when the summer window closes.”

Armed with an excess of money from the world-record €222 million sale of Neymar to Paris Saint-Germain, Barca have now turned their attention to Eriksen, according to the Independent.

Insiders at the Catalan club reportedly feel the Denmark international is a good suit for their style of football, but he may cost more than £100m.

13.25 BST: DONE DEAL Stoke have completed the permanent signing of Bruno Martins Indi from Porto after he spent last season on loan with the Potters. The defender has signed a five-year contract after Stoke agreed to pay €7.7 million to Porto. Full story.

13.08 BST: And here is that Sky Sports statement from an unidentified member of Philippe Coutinho‘s family…

It reads: “Philippe has tried very hard to find an amicable solution but to no avail. He has tremendous love for the club and fans but, like Steven Gerrard and Luis Suarez have pointed out in the past, Liverpool does not let its players leave on amicable terms.”

12.57 BST: Just to confuse matters on Philippe Coutinho even further, Sky Sports is now claiming that it has received a statement from a close family member saying that the midfielder has indeed handed in a transfer request to Liverpool…

12.50 BST: Press Association Sport is now reporting that Liverpool have denied that Philippe Coutinho has handed in a transfer request. Liverpool have apparently insisted that reports claiming he has asked to leave the club are “not true.”

12.32 BST: An embarrassing moment for Danny Rose, who has apologised for his “ill-judged” comments after he said yesterday that he would consider offers to leave Tottenham and called on the club to make some signings. Full story.

12.22 BST: Sky Sports claims Philippe Coutinho has handed in a transfer request at Liverpool, following their statement that he would not be sold to Barcelona.

12.20 BST: DONE DEAL at Besiktas, who have added to their hard-man quota with the signing of Gary Medel from Inter Milan.

Even though he is currently settled in the Chinese Super League the former West Ham, Manchester United, Manchester City and Juventus striker has taken the opportunity to discuss a potential third spell with boyhood club Boca Juniors. Full story.

11.59 BST: Monaco forward Kylian Mbappe is keen on a move to Paris Saint-Germain to form a pretty awesome sounding attack with Neymar but no agreement has been reached yet and may not be this summer, a source close to PSG has told ESPN FC. Full story.

11.35 BST: Speaking ahead of their opening Premier League game of the season, Stoke boss Mark Hughes also said they had rejected an offer from Swansea for Joe Allen.

“They made an enquiry,” Hughes said. “It wasn’t a bid or a request to buy him or anything like that. They just asked would we be willing to allow him to leave and we said no.

“I think we have to respect that they came and they did that and because of the answer they got you’d like to think they will respect our position.”

11.30 BST: Stoke could complete the signing of Bruno Martins Indi on Friday but it will not be done in time for him to play in the opening game of the season at Everton.

Negotiations with Porto have proved frustrating but Press Association Sport reports a deal just in excess of £7m has now been agreed.

11.04 BST: Philippe Coutinho will be missing for Liverpool this weekend. He joins Alexis Sanchez, Danny Drinkwater and Ross Barkley and Virgil van Dijk on the sidelines but what do they all have in common?

Klopp rules out Coutinho for Watford: “He has back problems.” #LFC

Klopp added: “If FSG is saying something like this then that’s the statement.”

10.57 BST: Borussia Dortmund have postponed their friendly at FSV Zwickau on Sunday as they do not feel they can “name a strong team” with Ousmane Dembele suspended after failing to report for training on Thursday. Full story.

10.40 BST: The Daily Echo claims Southampton are yet to receive any offers for Van Dijk despite the player submitting a transfer request.

10.25 BST: Mauricio Pellegrino says Southampton will keep trying to persuade Virgil van Dijk to stay at the club and not leave for Liverpool or Chelsea.

“My reaction is the same that I said three weeks ago: we are expecting him to come back, to train with us because we need the players, we need all of them,” he said. “Hopefully he can change his point of view. Virgil is an important player and we need him focused on our club.” Full story.

10.02 BST: Liverpool have issued a statement regarding reported interest from Barcelona in Philippe Coutinho and their stance is clear, but will Barca take the hint?

“We wish to offer clarity as regards our position on a possible transfer of Philippe Coutinho,” the statement read.

“The club’s definitive stance is that no offers for Philippe will be considered and he will remain a member of Liverpool Football Club when the summer window closes.” Full story.

09.42 BST: Spanish newspaper AS leads with news that Thomas Meunier has been offered to Real Madrid for €15-25m after losing his place at PSG to Dani Alves.

The 25-year-old Belgium international only joined PSG last summer but could be on the move with Madrid looking to replace Danilo.

09.25 BST: Isco has signed a contract extension with Real Madrid that includes a €700m release clause, according to AS. The Spain international, whose contract had a year to run, has signed a new four-year deal with the option of a fifth.

And, in case Madridistas are worried about someone meeting the release clause of one of their star players, the report adds that no one at the club has a buy-out less than €500m.

09.08 BST: According to the Sun, Mesut Ozil is set to agree a new deal with Arsenal despite his management trying to find him a new club.

08.50 BST: In Italy, Tuttosport says that Juventus have turned their attention to Kevin Strootman after Liverpool told them Emre Can was not available.

Roma are standing firm and want Strootman’s full €45m or nothing.

08.25 BST: The Guardian says anyone hoping to sign Ross Barkley from Everton, such as Tottenham, will have to pay £30m despite the player being in the final year of his contract.

The Daily Mirror claims a number of Danny Rose‘s teammates agree with the interview he gave questioning the club’s pay structure. Could an exodus be about to take place?

Paris Saint-Germain have already rocked La Liga this summer by signing Neymar from Barcelona. Now, according to reports in Spain, they are looking to repeat the trick by beating Real Madrid to Monaco striker Kylian Mbappe.

Sport claims PSG have agreed a €180 million deal with their Ligue 1 rivals for the 18-year-old France international, who was also said to be a target for Barcelona and Manchester City. That breaks down as €150m up front and €30m to follow in bonuses and additional payments and would take PSG’s total spend to over €400m this summer.

Marca agrees, although they report a slight variation of the transfer fee, and reports documentation is already being filed to ratify the move that will see Mbappe return to his hometown. They also say that next up for ambitious PSG is a move for Atletico Madrid goalkeeper Jan Oblak.

In France, though, Le Parisien has an altogether different take, with the outlet reporting that Monaco and PSG have both denied an offer has been made or that the transfer is happening at all.

Another player in demand across Europe this summer is Alexis Sanchez, but according to the Daily Mail at least, he could be tempted to stay at Arsenal and earn a cool £300,000-a-week.

To say Sanchez was influential last season would be an understatement. In all competitions the Chile international scored 30 goals and set up a further 15 for the Gunners, leading to speculation that Manchester City, PSG and Bayern Munich were interested.

Arsene Wenger might not be able to offer the Champions League football that Sanchez wants, but he has gone from stubbornly refusing to sell to increasingly confident of keeping his star man, the report claims, and with that kind of offer on the table it is easy to see why.

Dortmund digging in on Dembele

Borussia Dortmund are playing hardball, but it seems like only a matter of time until Barcelona reach an agreement to sign Ousmane Dembele.

In Spain, Sport reports that the player has already reached an agreement with Barca on a five-year contract worth €10m a year. That’s the easy part though, convincing Dortmund to sell given that they know how much Barca have to spend following the sale of Neymar is a different proposition altogether.

Earlier on Thursday, Dortmund rejected an initial bid from the Catalans for Dembele, reportedly in the region of €100m.

Alejandro Moreno reacts to Danny Rose’s comments on Tottenham’s lack of signings and the future of his playing career.

– Tottenham’s Danny Rose is wanted by Manchester United, the Mirror claims, as Jose Mourinho has decided signing a new left-back is now an issue that needs resolving. Last season the role was shared between Daley Blind, Matteo Darmian, Marcos Rojo, Luke Shaw and Ashley Young but Mourinho would like a player capable of starting regularly in the position.

– The Mirror reckons West Ham fear Liverpool will try to sign Manuel Lanzini if they lose Philippe Coutinho to Barcelona and are planning to offer the Argentine a new five-year contract to keep him in East London. But, should they lose Lanzini, the Hammers will turn to Brentford playmaker Jota, who is also wanted by newly promoted Newcastle.

– William Carvalho is being targeted by West Ham if they can raise the funds to finance his £25m transfer through the sales of Sofiane Feghouli and Robert Snodgrass. The London Evening Standard reports West Ham are optimistic about their chances of landing the Portugal and Sporting Lisbon midfielder.