Lions Tour To Take Step Up In Intensity Against Blues 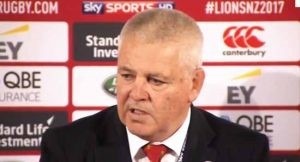 British and Irish Lions Coach, Warren Gatland knows his side will have to be put through hell if they are to be ready for the All Blacks on June 24 and the Auckland Blues will provide the perfect trial by fire for his side on Wednesday (June 7).

The Lions got off to a stuttering start to their tour on Saturday, limping to a 13-7 victory over the Provincial Barbarians in Whangarei with a performance that was roundly criticized by pundits both in New Zealand and back home.

While Gatland agreed it was not the ideal way to begin their 10-match tour, he said it was important to keep getting tough games under their belt to prepare for three tests against world champions New Zealand.

Gatland had promised wholesale changes for each of the first three games of the tour in order to give all of the 41 players an opportunity to press for test selection.

He stuck to his word for the Blues game with an entirely different starting side from that which played the Barbarians and indicated there could be up to 11 changes to the run-on side for the next game against the Canterbury Crusaders on Saturday.

In the Blues, they will undoubtedly be put under more pressure than they faced against the Barbarians.

While they have already been eliminated from Super Rugby playoff contention, the competition’s convoluted conference system has skewed their place in the standings.

Apart from dropping lock Patrick Tuipulotu to the bench and with Jerome Kaino still recovering from knee surgery, Tana Umaga named eight All Blacks in arguably his strongest starting side.

The biggest question mark hangs over rookie fly half Stephen Perofeta, who only made his debut off the bench on Friday, and how well he can spark a physical, hard-running backline that includes Sonny Bill Williams, George Moala and Rieko Ioane.