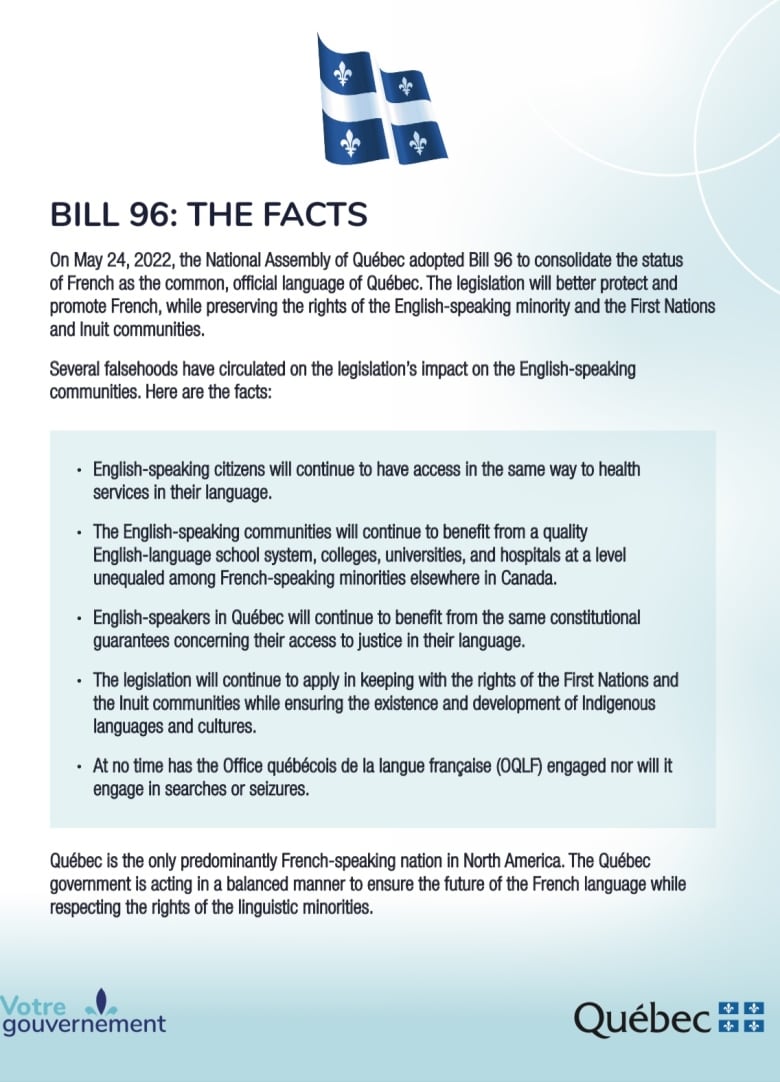 Legal experts are slamming a full-page ad from the CAQ government running in both French and English newspapers this week that purports to correct “falsehoods” circulating about the new law to protect the French language, commonly know as Bill 96.

“It’s bullshit over bullshit. That’s what it is. I mean, it’s lying to people with public money,” Bérard told CBC.

The ad campaign is in response to critical stories that were published in national and international media, including The Washington Post and The New York Times, after the new language law was passed last week.

The government ad begins with this preamble: “Several falsehoods have circulated on the legislation’s impact on the English-speaking communities. Here are the facts.”

It then lists five things about the new law that the government says have been misrepresented.

In addition to Grey and Bérard, CBC also asked Robert Leckey, dean of the faculty of law at McGill University, and Pearl Eliadis, associate professor at McGill’s Max Bell School of Public Policy, to weigh in on each of the five “facts” laid out by the government in its ad.

From the government ad: “English-speaking citizens will continue to have access in the same way to health services in their language.”

This first claim in the CAQ ad is a message that Premier François Legault and French Language Minister Simon Jolin-Barrette have repeated often in the last few weeks.

“I’m not fully persuaded by that one,” said Leckey.

He noted the law prevents all government institutions — including health-care institutions — from making bilingualism a requirement for people they hire.

That means in the future, fewer health-care workers proficient in English or any language other than French will be available to provide services to clients not comfortable in French.

“If, over time, you kind of reduce the resources of institutions, the guarantees are going to be shrunk, as well,” Leckey said.

Bérard said Legault and Jolin-Barrette may say that access to service won’t be affected, but he’s not reassured by that, because the legislation doesn’t explicitly exclude the health-care system.

“If you don’t want to apply it to health services, I mean, just make sure that you exclude them within the bill,” said Bérard. “It’s pretty simple. It’s pretty basic.”

Grey and Eliadis said the law only appears to guarantee access to health services in English to so-called “historic anglophones” — in other words, people who received their elementary and high-school education in English in Canada and who have the government-issued certificate to prove it.

They point out there are tens of thousands of anglophones who don’t fit into that category.

“They’ve divided English-speaking citizens into two groups: the old Anglos and the new Anglos. And it’s far from certain that the new ones will get anything,” Grey said.

“The bottom line is that there are, I think, legitimate concerns that people will be restricted in their ability to access health services,” said Eliadis.

Comparison to the rest of Canada

From the government ad: “The English-speaking communities will continue to benefit from a quality English-language school system, colleges, universities, and hospitals at a level unequaled among French-speaking minorities elsewhere in Canada.”

This claim exasperated the legal experts consulted by CBC.

“That’s the sort of assertion that I just hate,” said Bérard.

“Comparing the rights of anglophones in Quebec to the rights of francophones outside Quebec, it’s pathetic, because obviously it’s not the same. It’s a different history,” he said.

“At the end of the day, what’s your point? Are you saying that you can just violate the rights of the anglophone minority in Quebec just because in other provinces they do the same thing?”

“There are far fewer concentrations of French-speaking people outside of Quebec, compared with the English minority in Quebec.”.

“There are established and much more extensive networks of services — including education and health services — in Quebec,” said Eliadis.

Grey and Leckey said while it’s true English educational institutions will continue to exist, some will be weakened by the new law.

For example, Bill 96 caps how many students can enter English-language colleges, known as CEGEPs. This means fewer students who received their elementary and high-school education in French will have a chance to enrol.

Leckey and Grey said that hurts everyone.

“I suspect the students attending the English-language CEGEPs benefit from being there with their French-speaking brothers and sisters,” Leckey said.

“There’s going to be a shadow on the universality of these institutions,” said Grey. “Everybody comes out worse off.”

From the government ad: “English-speakers in Québec will continue to benefit from the same constitutional  guarantees concerning their access to justice in their language.”

All the legal experts consulted by CBC disputed this claim.

“The chance that they will continue to respect the constitutional guarantee strikes me as certainly reduced,” Leckey said.

He noted that Bill 96 requires all legal documents filed by companies to be either in French or with a certified French translation.

“Even a tiny corporation litigating henceforth that files papers in English is going to have to provide French translations of them,” said Leckey.

“Anybody who knows anything about translation costs knows that these proceedings are extremely expensive,” Grey said.

“That’s going to cost a fortune for companies who want to file documents in English,” Bérard said.

“In my view, that’s a restriction,” said Eliadis of the translation requirement.

Leckey and Grey also point out that the law reduces a requirement that all judges be bilingual, meaning there will be fewer judges available to hear court proceedings in English.

Grey said that’s akin to fixing something that’s not broken.

“The system of justice in Quebec has a lot of problems. Accessibility is terrible. Nobody can afford it. The bureaucracy is very bad,”  Grey said.

“But one thing which worked perfectly was its bilingual nature. There was no problem. So they’re attacking the one thing that worked.”.

From the government ad: “The legislation will continue to apply in keeping with the rights of the First Nations and the Inuit communities while ensuring the existence and development of Indigenous languages and cultures.”

This contention left Bérard wincing and shaking his head.

“Go ask any Aboriginal people in Quebec. They’re all going to tell you the same: Bill 96 is an encroachment [on] their right to education,” he said.

“I think the statement is disrespectful,” said Eliadis.

“You have Indigenous peoples themselves expressing serious concerns.”

Bill 96 forces all CEGEP students to take at least three French-language courses in order to graduate.

The Inuit of Nunavik, as well as the Cree and Kanien’kehá:ka (Mohawk) and other First Nations, have all expressed concerns about that requirement and have asked to be exempted from the new law.

French is often their third language, and many students entering CEGEP have spent their childhoods studying in their Indigenous language, as part of a concerted effort to save those languages and pass them on to future generations.

They say the requirement to take more French courses in CEGEP will put them at a disadvantage.

“The government has been asked over and over again to exempt Indigenous people, and they didn’t. If the government thinks it doesn’t affect them in any way, why didn’t they do it?” Grey asked.

“I think there should be a little more listening to the First Nations and Indigenous communities and a little less telling them what their deal is,” said Leckey.

From the government ad: “At no time has the Office québécois de la langue française (OQLF) engaged nor will it engage in searches or seizures. “

All our experts scoffed at this claim.

“There are specific provisions in the bill that allow the Office to enter into premises, in order to obtain information and documents. And those provisions would count as a search and seizure, in my view,” Eliadis said.

“The inspectors from the Office have the right — it’s written down — to seize whatever they think is relevant to their inquiry,” Bérard said.

Grey noted the OQLF already has the power to inspect businesses, just as many government regulatory agencies do.

But he said Bill 96 introduces a new wrinkle.

“Before, there were limits. It was under the charter,” Grey said.

“Now, for the first time, somebody has been given the right to inspect without recourse to the charter.”

He said essentially, the law gives the OQLF broader search and seizure powers than any regulatory body or police force in Quebec.

“It’s certainly very reassuring if the government says there won’t be any searches and seizures, but the proof will be in the pudding,” Leckey said.

Overall, a thumbs down

On Friday, Jolin-Barrette doubled down on his claim that the government’s ad was meant to counter false information about the new language law and show Quebecers what it really is.

“I don’t agree with that,” the minister said when told that experts CBC interviewed said information in the ad was wrong.

“So, we heard a lot of things that were not true and to answer that, to be clear …. We say what is really in the bill.”

But the legal experts all agreed that rather than dispel “falsehoods” about Bill 96, the ad campaign simply repeats dubious assertions the government has been making about the legislation for months.

“I don’t think the statements engage directly and seriously and respectfully with the concerns that have been voiced,” Leckey said.

“If what the government is currently saying in this campaign is true, so much the better,” Eliadis said.

“But based on the bill itself, it’s very difficult to see how this was anything other than an advertising campaign without a great deal behind it.”

“The idea that public funds are being spent on trying to claim that people who are legitimately protesting against a particularly invasive law is surprising and saddening, and it should not be so,” said Grey.

“I just hope that people will not only listen to what I said, but go take a look at the bill,” said Bérard. “It’s quite easy to read, and they will see by themselves that this government is lying to them.”