‘A national shame,’ say advocates about lack of progress on MMIWG action plan 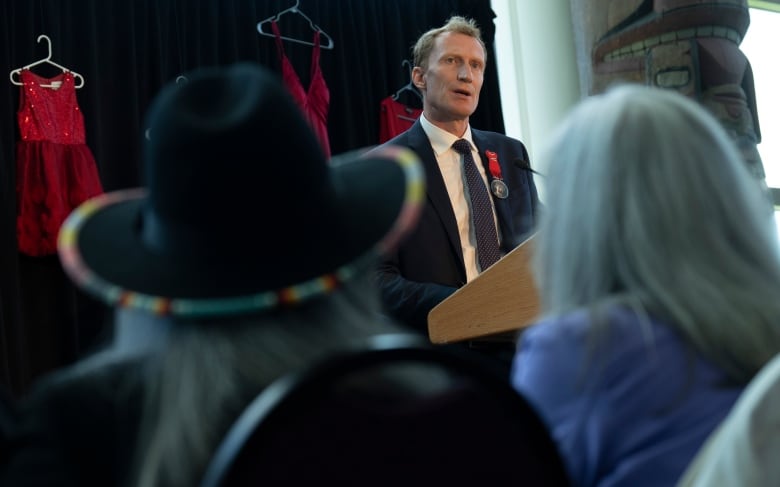 A year into a national action plan to end violence against Indigenous women, advocates say little has been done and more accountability is needed from the federal government.

“It is with deep disappointment and frustration that I say the lack of accountability is staggering and unacceptable,” said Hilda Anderson-Pyrz, chair of the National Family and Survivors Circle, during a press conference held at the Canadian Museum of History in Gatineau, Que., on Friday.

The National Family and Survivors Circle (NFSC) made significant contributions to the development of the national action plan, which was released June 3, 2021, on the second anniversary of the National Inquiry into Missing and Murdered Indigenous Women and Girls’ final report.

The inquiry concluded that the violence experience by Indigenous women and girls amounts to genocide and identified 231 Calls for Justice, including the call for a national action plan to be developed.

‘This genocide will continue’

However, contributors to the plan say little has been done thus far, especially on calls for justice that address accountability.

Neither have been established.

“This is a national shame,” said Anderson-Pyrz. “It is also dangerous, each day of inaction in this area leads directly to the tragic loss of human life.”

She listed the names of five Indigenous women across Canada who died by homicide since March: Tytiana Janvier, Chelsea Poorman, Doris Trout, Rebecca Contois, her own niece Tessa Perry, as well as the recent declaration for a coroner’s inquest that the death of Chantel Moore was a homicide.

“Without the political will to create transformative change, this genocide will continue,” said Anderson-Pyrz.

“We’re waiting for a return to power and place, and that requires a great deal of public education go on so that we can combat the sexism, racism, homophobia, transphobia in Canada.”

The national action plan included 23 short-term priorities to start within the next one-to-three years, such as public awareness campaigns, a nationwide emergency number, and a national task force to review and re-investigate unresolved files of missing and murdered Indigenous women, girls, and 2SLGBTQQIA+ people.

A progress report addressed the barriers in tracking progress of the goals, but stated a number of funding commitments were made directly to support families and survivors.

The Native Women’s Association of Canada (NWAC) was also critical of the government’s progress. The organization did not participate in the action plan, citing problems with the process, and released its own costed plan to address the inquiry’s call for justice.

“Today, we are seeing the sad results of the government’s weak response to the crimes being committed against Indigenous women, girls, and gender-diverse people,” said Lynne Groulx, NWAC’s CEO in a statement.

“The National Action Plan, as it was drafted, was actually a recipe for inaction, and the people represented by our organization are paying the price.”