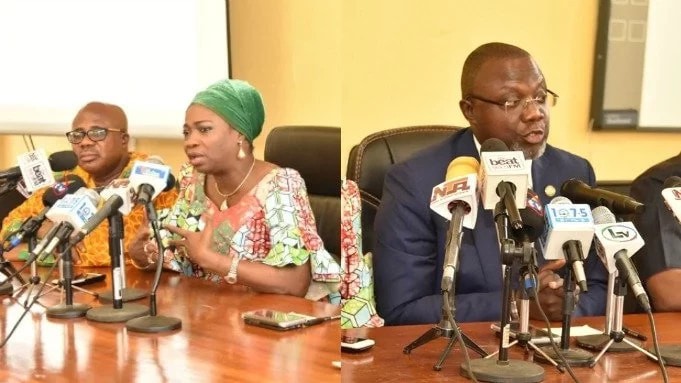 The Lagos State Government and the Federal Government have concluded arrangement to help over 15 million Nigerians in diaspora to trace their roots back home through the Badagry Diaspora Festival scheduled to hold between August 23 and 25.

Speaking at a news conference jointly addressed at the Bagauda Kaltho Press Centre in Alausa by the Senior Special Assistant to the President on Diaspora, Abike Dabiri-Erewa, and the Special Adviser to Lagos State Governor on Oversees Affairs and Investment, Ademola Abass, both governments said the festival would be a replica of the 1977 Festival of Arts and Culture otherwise known as FESTAC 77, designed to assist Africans in diaspora to reunite with their ancestral roots.

Apart from putting issues of Africans in diaspora on the front burner, the festival, according to Mrs. Dabiri-Erewa, would also provide platform to showcase the rich cultural heritage of Lagos State and Nigeria to the world and also promote tourism potentials of the country.

The presidential aide, who commended Governor Akinwunmi Ambode for throwing his weight behind the festival, said the event would host the largest gathering of Africans in the world, and that it was a thing of joy that many Africans in diaspora had already indicated interest in tracing their roots back home.

“For the first time, we have been having in Badagry a festival that brings people in the diaspora together but when we attended this festival few years ago, we sat together and said this would be the biggest cultural event to come out of Africa and so after years of planning, we have been able to come out with this programme this year coming up on August 23 to 25,” said Mrs. Dabiri-Erewa.

“United Nations already has declared ten years as decade for Africa, and so within the said decade, Nigeria in particular, and Lagos will be putting up one of the biggest gatherings of diaspora all over the world that will gather in Badagry later this year.

“One of the unique events of the festival is the ‘Door of Return’. A lot of people and things were taken out of Africa and Badagry in particular, and so our people in diaspora would be coming back through that door that we are calling the Door of Return, which is the opposite of ‘Point of no Return. Beyond that, we will be showcasing the beauty and culture of Lagos State in particular and Nigeria in general through the festival,” Mrs. Dabiri-Erewa said.

Also speaking, Mr. Abass said the State Government was delighted to partner with the Federal Government and other promoters of the festival, as the event was in sync with the cardinal objective of the present administration in the State to use tourism, hospitality, entertainment and sport to promote excellence.

He said apart from the fact that the festival was coming at a time the State was celebrating the 50 years of its existence, the festival would be utilized to showcase the giant strides of Governor Ambode’s administration in transforming Badagry to the next tourism hub in Africa.

“This festival is going to be utilized to promote the huge efforts that the present administration in Lagos State has been putting into turning Badagry around in terms of infrastructure, in terms of tourism and so many other things and so this forthcoming celebration falls squarely within our government agenda to promote tourism and also to promote investment.

“As you know, we are developing a Sea Port in Badagry among so many other things and so the festival will be a win-win for everybody especially for us in Lagos State,” Abass said.

On his part, Babatunde Mese-Waku, President of African Renaissance Foundation, one of the promoters of the festival, said a Brazilian, Baye De Santos, whose root has been traced to Ketu in Benin Republic, would be honoured at the festival for his contribution towards promoting issues relating to Africans in diaspora.