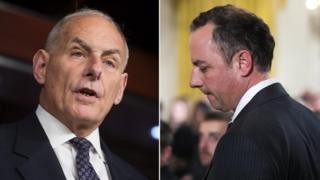 US President Donald Trump has named General John Kelly, who currently heads the Department of Homeland Security, as his next chief of staff.

The announcement, made over Twitter on Friday afternoon, effectively removed Reince Priebus from the role.

The embattled former chief of staff had faced pressure since being named as a possible leaker by Mr Trump’s newly appointed director of communication.

Mr Kelly is a retired general who has become the face of border security.

Anthony Scaramucci, who was appointed communications director one week ago, had accused Mr Priebus of leaking to the press in a tweet that he quickly deleted.

He also phoned a reporter to unleash a profanity-filled rant against Mr Priebus, whom he called a “paranoid schizophrenic”.

In a series of tweets just before 17:00 local time (22:00 GMT) on Friday, the president praised the former Marine Corp general as a “great American” and a “great leader”.

“John has done a spectacular job at Homeland Security. He has been a true star of my administration,” said the president.

In a third tweet, he praised the outgoing chief of staff, who had previously worked as the chairman of the Republican National Committee (RNC).

“I would like to thank Reince Priebus for his service and dedication to his country. We accomplished a lot together and I am proud of him,” he said.

In his previous role as RNC chairman, he acted as a bridge between the Republican nominee and a party establishment that was often uncomfortable with its own presidential standard-bearer.