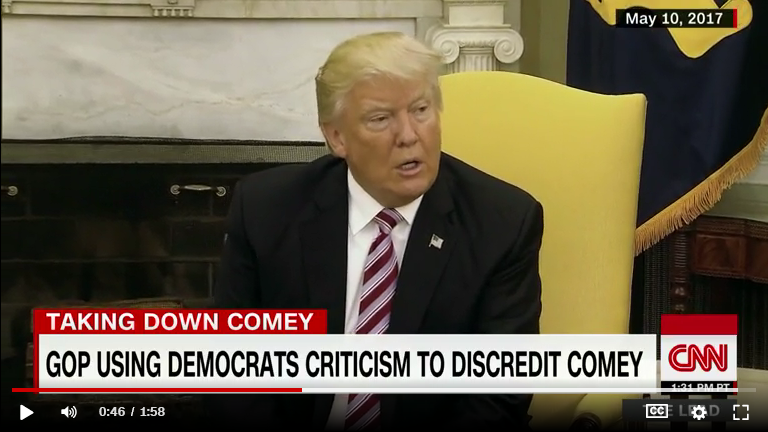 No one — probably not even Donald Trump — expected former FBI Director James Comey’s memoir about his life and times with the President who fired him was going to be a fun read for the man who calls 1600 Pennsylvania Avenue home.

But if the early reports of Comey’s “A Higher Loyalty” are any indication, the fired FBI director decided to take on Trump with both barrels — delivering an absolutely unsparing and embarrassing portrait of the most powerful person in the country.
In an excerpt of the book obtained by the New York Post, Comey recounts that at a dinner with Trump early in his presidency, the conversation turned to the possible existence of a salacious tape involving the president of the United States and urination.
Writes Comey, according to the Post:
“He brought up what he called the ‘golden showers thing. It bothered him if there was ‘even a one percent chance’ his wife, Melania, thought it was true. … He just rolled on, unprompted, explaining why it couldn’t possibly be true, ending by saying he was thinking of asking me to investigate the allegation to prove it was a lie. I said it was up to him.”
That revelation landed like an atomic bomb in political Washington.
While the rumored existence of the so-called “pee tape” had been swirling in Washington since BuzzFeed published the full dossier on Trump prepared during the 2016 election by former British spy Christopher Steele, most news organizations — including CNN — had avoided reporting on it. BuzzFeed News published the full, unverified dossier that included the infamous claim that Russian authorities had evidence of Trump watching prostitutes urinate in a hotel suite.
While portions of the dossier had been confirmed by the US intelligence community, other pieces of it — including the most salacious details
That Trump raised the specter of Comey using federal funds and time to prove to Melania Trump that the tape didn’t exist is absolutely stunning. It is yet more proof that Trump’s understanding of or care for the idea that the Justice Department doesn’t work directly for him is limited, at best. And that he viewed (and views) lines between the professional and personal as largely meaningless.
Then there is the fact that Comey chose to write about it. And not just write about the questions over the “pee tape” but also broader allegations that Trump frequented prostitutes. [Trump] “strongly denied the allegations, asking — rhetorically, I assumed — whether he seemed like a guy who needed the service of prostitutes,” writes Comey in an excerpt obtained by The Washington Post.
Trump and his allies will seize on Comey’s willingness to write about these salacious details as evidence that he is nothing more than a self-promoter focused on selling books. And that everything in the book should be dismissed as a result.
Whether or not you buy that line, what is without question is that Comey isn’t pulling punches. He is aiming to tear the hide off Trump and expose what he views as a President who is unfit for the office.
Share
Facebook
Twitter
WhatsApp
Pinterest
Linkedin
ReddIt
Email
Print
Tumblr
Telegram
Mix
VK
Digg
LINE
Viber
Naver
Previous articleJames Comey slams ‘the forest fire that is the Trump presidency’ in book
Next articleUS and allies launch strikes on Syria chemical weapons sites