US and allies launch strikes on Syria chemical weapons sites 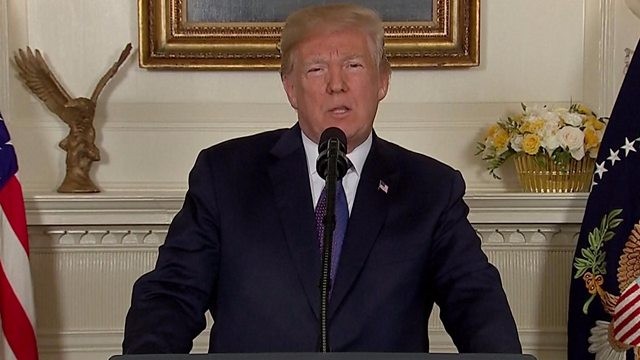 US and allies launch strikes on Syria chemical weapons sites

The US, UK and France have bombed multiple government targets in Syria in an early morning operation targeting alleged chemical weapons sites.

The strikes are in response to a suspected chemical attack on the Syrian town of Douma last week.

“A combined operation with the armed forces of France and the United Kingdom is now underway,” President Trump said in an address to the nation.

Explosions were reported near the Syrian capital Damascus.

At a Pentagon briefing, Gen Joseph Dunford listed three targets that had been struck:

The government’s main ally, Russia, issued a statement through its US ambassador, saying “such actions will not be left without consequences”.

Statement by the Ambassador Antonov on the strikes on #Syria:
A pre-designed scenario is being implemented. Again, we are being threatened. We warned that such actions will not be left without consequences.
All responsibility for them rests with Washington, London and Paris. pic.twitter.com/QEmWEffUzx

Gen Dunford said the US had specifically identified targets that would “mitigate” the risk of Russian casualties. But the Pentagon said that Russia had not been given advance notice of the targets.

US Secretary of Defence James Mattis told reporters there were no reports of US losses in the operation.

“Right now, this is a one-time shot, and I believe it has sent a very strong message,” he said, saying the first wave of strikes was over.

President Trump had earlier said: “We are prepared to sustain this response until the Syrian regime stops its use of prohibited chemical agents.”

UK Prime Minister Theresa May confirmed British involvement, saying there was “no practicable alternative to the use of force”.

But she also said the strikes were not about “regime change”.

UK strikes carried out by four Tornado jets hit the second target mentioned by Gen Dunford, a military site near the city of Homs which is believed to have housed precursor materials for chemical weapons, the ministry of defence said.

“Dozens of men, women and children were massacred with chemical weapons,” he said of the Douma incident a week ago – adding that “the red line had been crossed”.