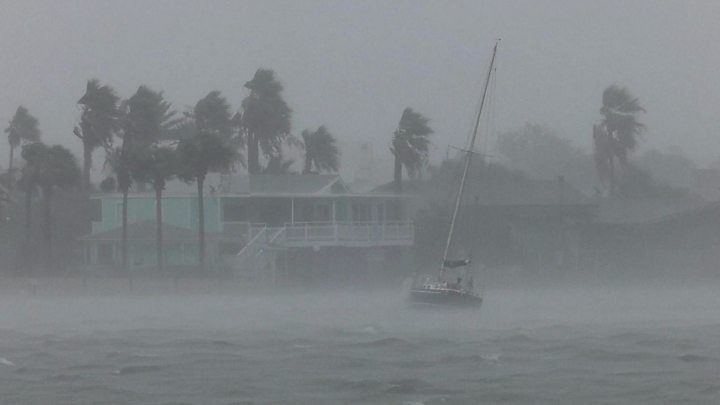 Hurricane Harvey has made landfall in Texas with winds of up to 130mph (215 km/h) battering coastal areas.

President Trump has signed a disaster proclamation for the state, which will free up federal aid for the worst-affected areas.

The category four storm has already brought down trees in Corpus Christi and thousands of residents have boarded up their homes and fled.

The mayor of nearby Rockport Patrick Rios urged the few people in the town’s population of about 10,000 people not already to have evacuated to do so immediately.

The city manager said that people were trapped in a housing centre for elderly people, where the roof had collapsed and rescue teams were unable to gain access, according to CBS.

There have been long queues of traffic heading out of the storm’s path.

Governor Abbot said it was obvious that Texas was confronting “a very major disaster”, while deploying more than 1,000 National Guardsmen were to help with the disaster relief operation.

High winds began lashing the coast at nightfall on Friday as coastal water levels rose at the same time.

Harvey is the first major storm of the Atlantic hurricane season and has severely hampered Gulf of Mexico oil production and air travel.

It is expected that more than 40 ins (1m) of rain will fall over the next few days, generating storm surges of up to 12ft (4m).

Forecasters say the storm’s path is uncertain but it is expected over the next few hours to be near or just inland of the middle of the Texas coast.

The storm is likely be the strongest storm to hit the US since October 2005, when Hurricane Wilma struck the coast of Florida.

.The last category four storm to hit the US was Charley in August 2004.

What are the dangers?

While Harvey is packing strong and potentially devastating winds, the biggest threats to Texas are rainfall and the storm surge.

Oil-rich Houston, the fourth biggest city in the US, could face up to 20in of rain over the coming days, officials there said.

On top of that, the central Texas coast is likely to see a significant storm surge – this happens when low pressure at sea “lifts” tides to a level higher than normal, up to 12ft in this case, and high winds then blow the water inland.

The NHC said it expected “catastrophic flooding” across the coast and in some inland areas throughout south-east Texas.

Parts of Texas are already seeing a storm surge 2.5ft above normal.

About 45% of US oil refinery takes place on the Gulf of Mexico coast, and Corpus Christi is an important port for the industry.

Crude oil production has slowed down by about 20% to prepare for the storm, and fears Harvey could lead to a shortfall in fuel have helped drive up prices.

Long queues of cars have been spotted leaving central Texas and the British band Coldplay cancelled a Friday night concert in Houston.

At least 20,000 passengers on three cruise ships have been unable to disembark in Galveston, Texas, cruise operator Carnival Corp said.

The Houston Chronicle reported they, and the passengers on one other ship, may need to stay out at sea until the middle of next week.

Meanwhile, Driscoll Children’s Hospital in Corpus Christi has flown at least 10 babies from its neonatal intensive care unit to hospitals further inland, due to fear of power failures.