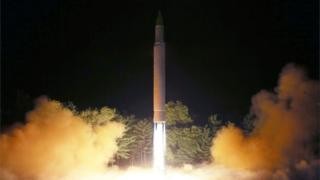 They were launched from a site in the North Korean province of Gangwon and flew for about 250km (150 miles), officials in South Korea said.

Since firing an intercontinental ballistic weapon last month, Pyongyang has threatened to aim missiles at the US Pacific territory of Guam.

But this latest test did not threaten the US or Guam, the US military said.

Thousands of US and South Korean troops are currently taking part in joint military drills, which are mainly largely computer-simulated exercises.

The US military said three missiles were fired.

“The first and third missiles… failed in flight. The second missile launch… appears to have blown up almost immediately,” said Commander Dave Benham of the US Pacific Command.

The launches were spread over a period of 30 minutes, he added.

“The military is keeping a tight surveillance over the North to cope with further provocations”, the South Korean defence ministry said.