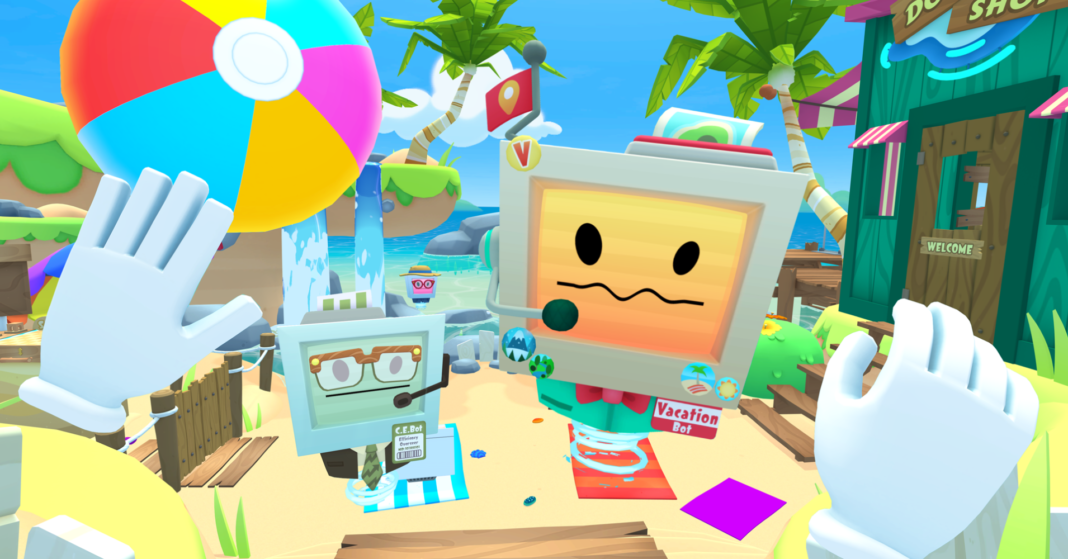 Google’s Owlchemy Labs is experimenting with ARcore to take its games to the next level — by taking players on a virtual getaway.

“Vacation Simulator” — a follow up to the lab’s hit game, “Job Simulator” — is set in the year 2060. The premise involves robots (the same ones who stole most of humanity’s jobs in “Job Simulator”) doing some research, and discovering that when people were not working, they would take vacations.

In this particular simulation, however, robots creating the environment for humans are struggling to grasp the concept of vacation. Unlike “Job Simulator,” the new game will feature a significantly more expanded environment instead of different ones confined to dedicated levels.

Not only will players have more landscape to explore, but they’ll have more of a narrative, as robots interact more within the virtual reality (VR) simulation.

“There’s multiple different zones on the beach itself where you can interact. You can go play in the water. You can go build sandcastles, grill hot dogs,” and a few other things, said Owlchemy Labs’ CEO, Devin Reimer

“The game is a much bigger undertaking than ‘Job Simulator’ was. It opens up a lot more interesting things inside VR,” he added.

Within this demo, the company also gave spectators other actions they could engage in, such as launching a virtual beach ball from their (real) mobile phones into the virtual world. The company was able to play around with a few added features that players may eventually see integrated into future games.

Owlchemy Labs isn’t the first to have experimented with AR in conjunction with a virtual reality game. Reimer mentions a video from Oculus Connect 5 that showcases a look at the “Dead and Buried Arena.” Though they use different techniques, both teams were separately and simultaneously working on similar experiences.

According to Reimer, the company had been doing extensive research and development to experiment with mobile spectating. The company has also used mixed reality in the past to create an integrated experience showcasing for those less familiar with VR what it looks like to be immersed in a virtual environment.

While Owlchemy has been experimenting with spectator modes, this new technology won’t be included quite in time for “Vacation Simulator.” However, with what the company has in mind for the future, consumers will be able to pair their personal computer and mobile phone over W-Fi, calibrate and experience a spectator view of virtual reality through their phones.

For now, the VR experience is mostly individual; however, Owlchemy’s new advancement would bring in spectators who could enjoy the game alongside players beyond watching someone play.

While there are still obstacles to overcome in bringing this tech to consumers, a mixed reality world could be just around the corner.

“There’s a lot that we can do to not only make virtual reality more accessible but more interesting to people that aren’t particularly inside the headset” Reimer said.