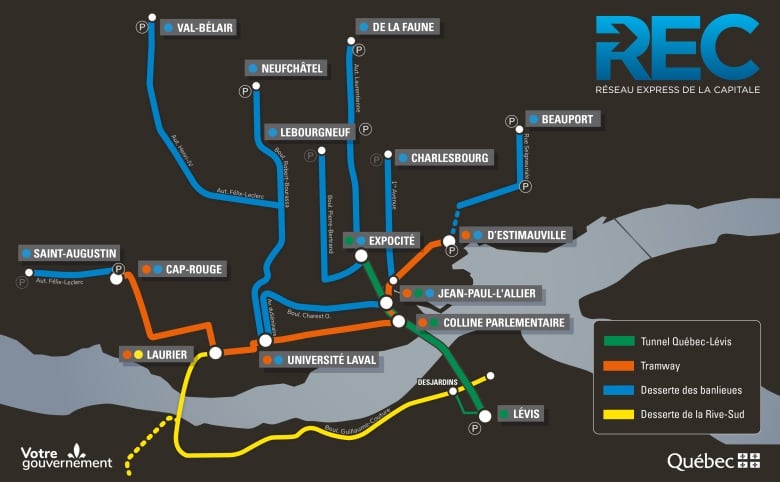 Last month, Premier François Legault officially asked the federal government to fund 40 per cent of a controversial tunnel project that would provide a third access point to Quebec City from the south.

His request made the “third link” a topic of discussion on the campaign trail in the city ever since — and it could sway voters in key battleground ridings in the area.

The two-tier tunnel would connect Quebec City’s downtown sector with South Shore municipality of Lévis. It’s projected to cost anywhere between $7 billion and $10 billion and is expected to be completed by 2031.

With one third of its lanes reserved for public transit and carpooling, the province is touting the third link — a campaign promise of the Coalition Avenir Québec government — as a public transit-friendly project that would remedy major traffic issues on the Quebec and Pierre-Laporte bridges.

Throughout his first week on the campaign trail, Bloc Québécois Leader Yves-François Blanchet was hesitant to take a stand on the project, preferring to point out that the project falls within provincial jurisdiction,  so his opinion therefore did not matter.

But as reporters continued to press for answers, Blanchet caved and let his opinion slip on his 10th day campaigning, saying he “does not hate” the project.

“I am convinced that it can be [ecological] and that Quebec is perfectly conscious that this project has a positive potential in terms of the environment,” Blanchet told reporters.

Just days later, Blanchet clarified that he had expressed his personal opinion, not that of his party.

Thierry Giasson, political science chair at Laval University, says that Blanchet’s showing support for the project “was a poor decision.”

“Especially because he was an environment minister in the [Parti Québécois] … this creates distortion and creates confusion in people’s opinions of him, especially if those voters are really preoccupied by the environment and climate change,” he said.

Giasson believes Blanchet was aiming to once again ride the wave of Legault’s popularity, which helped his party go from 10 to 32 seats in the last election.

With the Bloc hoping to make inroads against the Conservatives in Quebec City’s suburbs while staving off Liberal attacks elsewhere in the province, Giasson said, Blanchet has little room for error.

“It’s a risky situation,” he said.  “Some of these people voted for the Bloc last time around because they were advocating against pipelines.”

Several environmental groups have criticized the project, saying it could lead to more urban sprawl and encourage people to use their cars to reach the city, increasing greenhouse gas emissions.

Just last week, a coalition of more than 12 environmental groups, called Non au troisième lien, called on the next federal government not to fund the project.

Both the Green Party and the NDP have come out against funding the project, saying the money could be better spent on public transit and housing.

In the first French-language leaders’ debate on TVA Thursday night, Prime Minister Justin Trudeau used the opportunity to call into question Blanchet’s commitment to the environment, accusing him of having bypassed the province’s environmental review board three times as a provincial minister.

Conservative Party Leader Erin O’Toole kicked off his campaign in Quebec with a promise to fund 40 per cent of the third link.

“A third of this tunnel will be for public transit, and we also recognize that when it will be built in 10 or 15 years from now … about 30 or 50 per cent of cars will be electric cars,” the Gérard Deltell, Conservative incumbent in the Quebec City riding of Louis-Saint-Laurent, told CBC Quebec’s Breakaway this week.

A poll published by Léger Marketing on July 28 shows 64 per cent of the 2,000 people surveyed in Quebec City and surrounding areas are in favour of the proposed tunnel, which was a topic of discussion in the city even before the Pierre-Laporte Bridge was completed in 1970.

“That announcement clearly showed us that the Conservatives really do understand who their constituency is,” Giasson said.

“They know who they need to rally in order to at least keep the ridings that they won last time around, but also to make some gains in specific ridings, especially in Beauport–Limoilou, where the last election brought in a Bloquist.”

Incumbent Quebec MP Jean-Yves Duclos said the project needs to be studied further before the Liberals commit to any funding.

“The Canadian government does not finance highway projects,” Duclos said in a news conference last month.

“We know that a major part of the third link between Lévis and Quebec City cannot be financed by the Canadian government because it is a highway project.”

Duclos said he would be open to financing the public transit portion of the project but would need to see studies first.

He narrowly kept his seat in the last election, beating the Bloc’s Christiane Gagnon by just 325 votes.