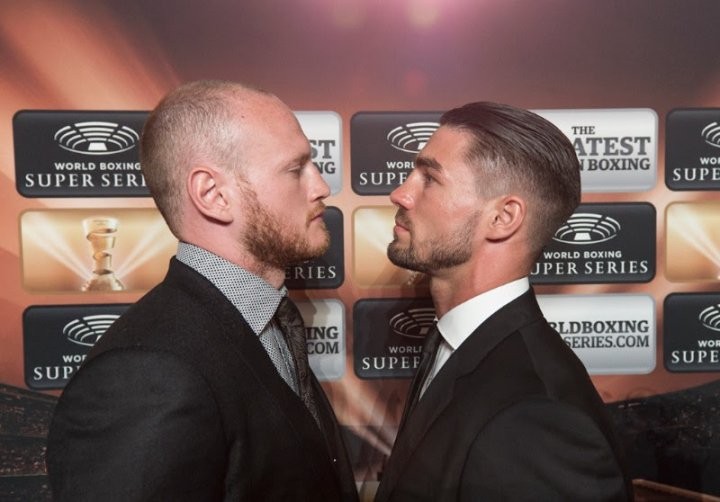 Super middleweight world titleholder George Groves, who is the No. 1 seed in the World Boxing Super Series 168-pound tournament, and unseeded British countryman Jamie Cox have a date and site for their quarterfinal fight: Oct 14 at SSE Wembley Arena in London.

When the competitors in the eight-man single-elimination World Boxing Super Series super middleweight and cruiserweight tournaments attended the draft on July 8 in Monte Carlo, where the top four seeds picked their foes from the unseeded boxers, Groves, who had the first pick, was derisive toward Cox.

“It’s a long tournament, so I picked the easy guy first,” Groves said at the time.

Groves changed his tune a bit when tournament organizer AG Comosa announced the date and site on Monday.

“I’ve got them in abundance, but he’s brand new, he’s a total novice. I don’t think he’s even headlined his own show yet and he’s getting flung in the deep end with me. This is a big pressure fight for him and I think he’ll struggle to cope.”

Groves, who had lost three previous world title shots (two by knockout), will be making the first defense of the vacant belt he won by stopping Russia’s Fedor Chudinov in the sixth round on May 27.

“I’m really looking forward to getting started,” Groves said. “It’s great to have a date set so early to give you something to strive for. I’m already in the gym plugging away and I’ve got plenty of time to prepare.”

Groves (26-3, 19 KOs), 29, will be returning to the arena where two fights ago, in November, he won a lopsided decision against Eduard Gutknecht, who suffered a severe brain injury, nearly died and remains incapacitated.

Cox (23-0, 13 KOs), a 30-year-old southpaw who has known Groves for years, will be taking a monumental step up in the level of his opposition.

“I’m really excited for this fight,” Cox said. “To win a world title on the way to fighting for the Muhammad Ali Trophy [that will go to the tournament winners] would be a huge honor. I’m glad George picked me. I was prepared for anyone but I was hoping for a U.K. fight so I can’t wait.

“George is a tough opponent. He has some good attributes but I’m prepared to shock everyone. This is what I’ve been working toward all my career, and to be a part of something this big is amazing. Now I’m here, I’m ready to capitalize on it and win my first world title and progress to the semifinals.”

An American television deal for both tournaments has not yet been worked out.