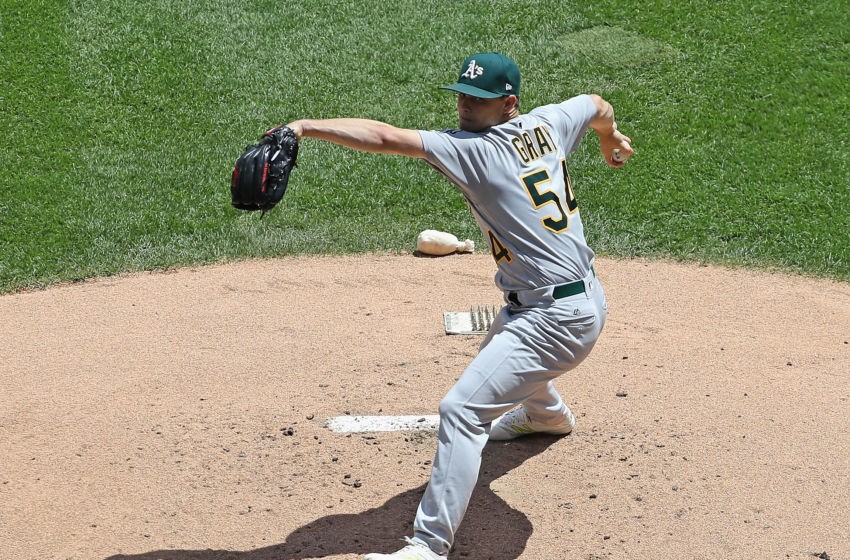 The talk of Sonny Gray moving has been heavy, but actual rumors have been light. Rightfully, the A’s are holding out for a stellar package. As the deadline nears, teams will get increasingly desperate for that extra push, hopefully offering Oakland more for their star righty.

In spite of the seeming inevitability of Sonny Gray moving for some time now, it’s not a done deal. Here’s why the A’s should do it.

A full rebuild means all hands on (or off) deck

The A’s front office recently came out with a committal to a full rebuild.

If we do take the front office at their word, though, it makes sense for the A’s to sell their best asset. They don’t see their window as next season or the year after, but are planning on moving into their new stadium as the next decade rolls around with a team that’ll be there to stay.

Sonny Gray just doesn’t fit in that window. His prime is probably right now, and Oakland’s is not. If the A’s are going to tear down, there’s no sense in waiting, and there’s no time like the present to sell a great starting pitcher.

The price of players at various positions can vary year by year. Right now, the price of pitchers of both kinds is sky high. It’s why two solid relievers netted a stronger return than one of the best bats in the game, and it’s why the White Sox are looking like the winners of the trade season so far.

Jose Quintana is a solid gauge for Sonny Gray, possibly a bit more valuable due to his durability. He netted two top prospects with two lower-upside guys in tow, which is impressive value. Some buyers appear hesitant to match that price, but the precedent is set and it only takes one team to bite.

But that’s all only true in this snapshot in time. We don’t have to look back far to remember how a pitcher’s value can come crashing down — Sonny was a blockbuster trade candidate after 2015, but an off-year in 2016 decimated his stock. It’s only by the grace of the baseball gods that the A’s are getting a second chance at this at all, so there is a lot of risk involved in spurning the opportunity to cash in this year.

Gray is a quintessential example of the current state of positional value. While position players can reasonably be relied on to form the heart of a team for consecutive years, starting pitchers (and relievers too) are less and less likely to be future assets. And this particular one has given us all one big scare already.

Root for Sonny to get a ring

Moving Gray will sting. It’s sad to see your favorite players go, specifically teenagers with obviously glued-on beards and a playoff track record that will never be forgotten.

To put it somewhat positively, the opening of Gray’s window is of indeterminate size. He was rough in 2016 and there’s no telling exactly how long his presently elite stuff will last. The sad truth of the matter is that his window and the A’s window are likely misaligned. You want Gray to succeed, I want Gray to succeed, and if he’s going to have a chance at glory then leaving now for a present-day contender is his best bet.

So who is in the mix at this juncture?

The Yankees have to be the favorites at this point, having ample prospects to cash in for a guy like Gray. Their rotation is in tatters and they need a bit of a shot in the arm after cooling down the past few months. Gray would be just that.

The good news? The A’s are asking for “top guys” for Gray (via Jon Heyman, FanRag Sports). If a move happens, odds are the dudes headed to the farm will be dudes with that name caché. There will be plenty of shiny new toys to get you to 2018.

The bad news is that the Yankees aren’t buying it. Yet. We’ll see how the next seven days shake out. (via Joel Sherman, NY Post)

The Mariners are interested in Sonny Gray (via Mark Feinsand, MLB). The M’s window, if it’s even there, will close as stars like Robinson Cano and Nelson Cruz continue to age. Their farm system isn’t poised to replace that value in any major way. So in a way, it makes sense. Jerry Dipoto makes the A’s look like a stable organization in his trading ways, and nothing is out of the question with him at the helm.

That said, the Mariners’ system is father unimpressive. Kyle Lewis is a stud when healthy, but isn’t quite the centerpiece you’re looking for when giving up someone to the degree of Sonny. They seem unlikely.

The early favorites for Gray were the Brewers, who are presently fading in both their races for the NL Central and the A’s ace. Ken Rosenthal of Fox Sports reports that the Brewers have cooled in their pursuit, likely unwilling to part with much value at such an early stage in their contention window.

The Braves are supposedly in the mix, though likely dark horses at this point (via Sherman). They’re gearing up more for the future than the present, and probably won’t want to pay the price the A’s are seeking. I just don’t see a team who isn’t in pure go-for-it mode pulling the trigger.

Apparently not content to just join our division and then turn into a massive juggernaut, the Astros are considering Gray as well. Talks have cooled, says Heyman, but there’s still time before the deadline for the Astros to decide this is their moment to go all the way in.

Speaking of the rich wanting to get richer, the Cubs want our ace too, according to Jon Morosi of MLB Network. It’s hard to envision them doubling down on giving up that many prospects, but never doubt Theo Epstein.

The final team in the mix is an excellent reminder of how these deadlines often play out: it’s the Nationals (via Morosi), who recently saw pitcher Stephen Strasburg exit with a forearm injury. After a few disappointing postseasons and a superstar departure looming over the horizon, the Nats might be inclined to go for it, and they’ve got a top-heavy system that might pique the A’s interest.

Sonny’s market briefly received some ace-level competition the last few days when Yu Darvish of the Rangers began popping up in rumors. However, the latest word has Texas “leaning toward keeping” him, says T.R. Sullivan of MLB.