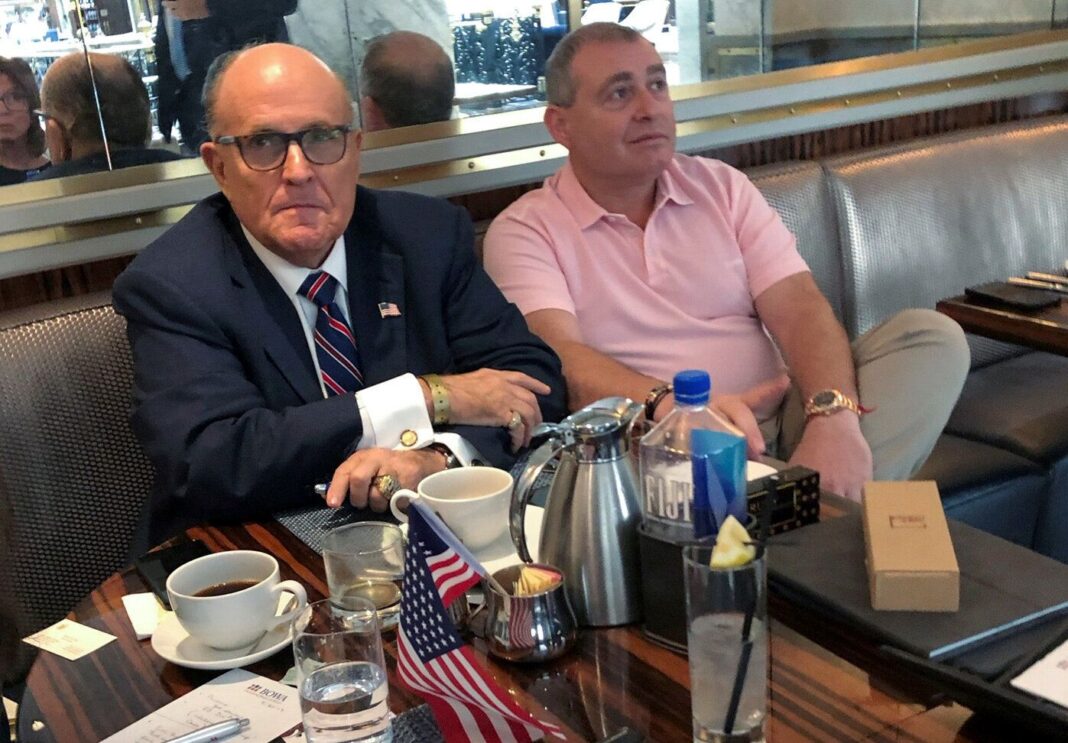 Lev Parnas and Igor Fruman, who helped Giuliani investigate allegations against Joe Biden and his son Hunter, are accused of illegally funding American political campaigns. The Wall Street Journal, which first reported the arrests, said that Parnas and Fruman had donated to Trump’s campaign as well as a pro-Trump super PAC.

The charges emerged from the Southern District of New York, but a Justice Department spokesman said the duo would appear at the federal courthouse in Alexandria, Virginia, at 2 p.m., before U.S. Magistrate Judge Michael S. Nachmanoff.

The indictment alleges that Parnas and Fruman committed to raising more than $20,000 for a sitting U.S. congressman, and that Parnas “met with Congressman-1 and sought Congressman-1′s assistance in causing the U.S. Government to remove or recall the then-U.S. Ambassador to Ukraine.”

“Congressman-1” is former Rep. Pete Sessions (R-Texas), who sent a letter to Secretary of State Mike Pompeo asking for Marie Yovanovitch to be removed as U.S. ambassador to Ukraine after his meeting with Parnas, according to the Texas Observer.

Parnas and Fruman are alleged to have concocted a straw donation scheme to hide their political contributions and give in excess of the campaign contribution limits.

A $325,000 donation to the pro-Trump super PAC America First Action was made in the name of Global Energy Producers LLC, a shell corporation purporting to be engaged in the liquified natural gas business, according to the indictment.

Donations made to Republican Party candidates in Parnas’ name were actually funded by Fruman, prosecutors allege. It is illegal to make a campaign contribution in someone else’s name. These donations included a maximum $2,700 contributions to Sessions and House Republican Minority Leader Kevin McCarthy (R-Calif.).

Prosecutors say the illegal foreign donations made through Parnas and Fruman went to “politicians and candidates for federal and state office.” The indictment refers to specific donations to two Nevada state Republican Party politicians. State campaign finance records show the only two Nevada candidates to receive such contributions were gubernatorial candidate Adam Laxalt and attorney general candidate Wes Duncan. The Nevada contributions were allegedly made as part of a failed attempt to secure licenses for a legal cannabis business venture.

The foreign donor ― who is only identified as Foreign National-1 and described as a “Russian citizen and businessman” ― allegedly wanted to remain anonymous due to “his Russian roots and current political paranoia about it.”

The campaign finance allegations against Parnas and Fruman were first flagged to authorities by the Campaign Legal Center, a nonprofit campaign finance watchdog, in a complaint filed with the Federal Election Commission on July 2018.

“The public is now learning just how dangerous dark money can be in U.S. elections, including the potential for illegal foreign funds, which DOJ says were used here,” Trevor Potter, Campaign Legal Center president and former counsel to Sen. John McCain, said in a statement. “The fact that these two individuals were working with Giuliani and Ukrainian government officials to alter U.S. policy in that country will obviously be relevant to the impeachment investigation.”

All four defendants are U.S. citizens. Parnas and Kukushkin were born in Ukraine, while Fruman was born in Belarus.