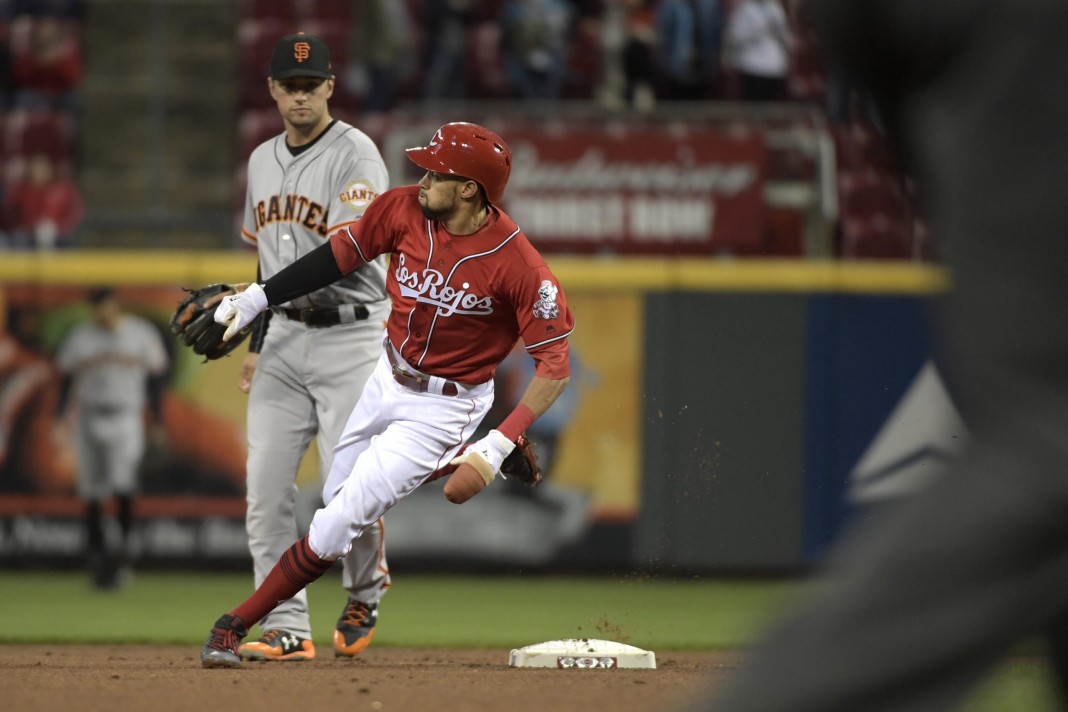 For the first game of the double header, the Rays skinned a bunch of Smurfs alive to create their “retro” jerseys and pants in an effort to try and blind the competition. It was an effective strategy, as the Rays emerged victorious in extra innings despite a ten-swinging-strikeout performance from Sonny Gray and a season-high sixteen hits and five runs scored from the offense.

With a minimum of eighteen innings to be played on the day it was imperative that Game 1 starter Sonny Gray pitch effectively and efficiently to preserve the bullpen. And for the first three innings of the game, that’s exactly what the team got. Thanks in part to two admittedly slick double plays, through the first third of the game Sonny Gray faced the minimum while also procuring five strikeouts and looked to be in control early.

Early on, Rays’ starter Erasmo Ramirez was matching Gray pitch for pitch. Ramirez has been a thorn in Oakland’s side across multiple iterations of A’s squads while pitching for multiple teams, and through the first two innings Ramirez had four strikeouts of his own and didn’t allow a baserunner to move beyond first base. But the bats came alive for the A’s in the top of the third inning, however, as with one out the A’s notched five consecutive hits, the biggest ones being an RBI double for Jed Lowrie and RBI singles for Khris Davis and Yonder Alonso. Lowrie’s double was his league-leading 21st of the season. With the A’s very quickly up 3-0 on a suddenly very shaky looking Ramirez, the team was poised to put even more runs on the board when Ryon Healy squared up a pitch right down the heart of the plate but unfortunately hit it on the ground right at Tampa Bay’s short stop for an inning ending double play.

The offense stayed hot in the next inning, when the first three batters were gifted bases by the Rays’ defense (an error, a walk, and a hit by pitch) to load the bases for the top of the order, but Matt Joyce grounded into a 1-2-3 double play and Chad Pinder flied out to center field to end the inning and the threat. The A’s were still up 3-0, but the team unquestionably could have and should have been up by more, and it didn’t take long for those missed opportunities to pile on to haunt Oakland.

Sonny Gray has mostly looked like his old self, but, as was also a problem last season, seems to be getting figured out and loses deception once he gets through the opponent’s batting order once. And as dominant as Sonny looked in the first three frames, when the Rays lineup turned over in the bottom of the fourth some cracks in Sonny’s game started to show. Gray didn’t do himself any favors, either, as he began his inning by fielding a soft ground ball back to the mound and tossing the ball into right field for an error. A one out double from Evan Longoria placed Rays on second and third base. A strikeout of Logan Morrison nearly helped Gray escape the inning unscathed, but Steven Souza ripped a single to left field to score both runs and brought Tampa Bay within one run. Gray got another strikeout to end his inning, giving him eight total through four innings, but the damage was done.

In the fifth, each team got a runner in scoring position with two outs, but neither team could drive that run in. In the sixth inning, the A’s chased Erasmo Ramirez after Jaycob Brugman got the first hit of his career on a single up the middle and Phegley followed it up with a hit of his own, but the team couldn’t capitalize on the run scoring opportunity, yet again, and the A’s lead remained a tenuous 3-2.

That lead turned into a deficit by the end of the next half inning, and it was poor defense that spelled doom for the A’s once again. Evan Longoria led off the inning with a “double” to left center field that should have been caught by Brugman to immediately place Gray in the hot seat. Gray pitched pretty well to the next three batters, getting a strikeout, a ground out, and a walk to place runners on the corners with two outs for the light-hitting Tim Beckham at the plate. But after getting ahead of Beckham 0-1 Gray left a slider down the heart of the plate and Beckham hit a lazy fly ball double to right field to score both runners and give the Rays a 4-3 advantage. That lead expanded to 5-3 when Michael Martinez beat out an infield single that wound up scoring Beckham from second base. Beckham should have been out at home plate, as an alert Alonso got the ball to Phegley while Beckham was still a good thirty or forty feet from home plate, but Phegley miffed the feed from Alonso and Beckham touched home safely anyways. Each run scored by the Rays on the day could be attributed, at least partially, to poor defense. Gray’s final line on the day was six innings pitched, nine hits, five runs (two earned), one walk, and ten strikeouts, all swinging. His stuff was good, and while the Rays are strikeout prone the movement on his pitches would have had any lineup flailing, but he still struggled as he got deeper into the game, and while the defense didn’t do him any favors, it would be nice to see him stay effective for longer. Coulombe and Axford out of the bullpen behind Gray were just dandy.

The A’s squandered scoring opportunities in each of the previous four innings they were at the plate, but with the team finally losing the lead in the previous half inning, perhaps a sense of urgency got the bats going once again in the top of the seventh. Lowrie and Khris Davis hit back to back singles to begin the inning, and after an Alonso flyout, Healy stroked a low line drive into left center field for an RBI single that brought the A’s back within one run, 5-4, and in prime position to score even more. Unfortunately, Plouffe awfully popped out on the first pitch he saw for the second out of the inning, and after Brugman hit a soft single into left field for his second career hit to load the bases, pinch hitter Stephen Vogt fouled off four tough pitches before popping out himself for the third out.

The bats were shut down in the eighth, but with how the team had been hitting all day and the heart of the order due up in the ninth, there was bound to be some more fireworks. After taking two tough outside pitches that just kissed the strike zone, Alonso took yet another soft, outside offering from Rays’ closer Alex Colome and drove it into the opposite field corner for a double. Healy didn’t wait around, as he drove the second pitch he saw into left center field to tie the game up at five with a double of his own. A Matt Olson pinch-hit flyout led to the second out of the inning, but Brugman then notched his third hit of the game on a ground ball up the middle to put runners on the corners with two outs for Stephen Vogt. After popping out with the bases loaded in his first at bat, Vogt weakly grounded out to second to end the top of the ninth, but at least the game was tied once more. Ryan Madson entered the game in the ninth inning and struck out the side to send the game to extras.

The A’s were quickly sent down in the tenth inning and the A’s placed their fate in the right arm of Liam Hendriks in the bottom of the tenth. Weak-hitting Peter Bourjos singled on a line drive just passed a diving Lowrie and then advanced to second base on a wild pitch. Evan Longoria then ended the game on a sharp hit to left field that allowed Bourjos to trot home with the winning run.

The A’s end the first half of their double header on a sour note. The A’s failed to pile on early after wasting scoring opportunities in four consecutive innings when they had the lead, and the same sorry story of poor defense allowed the Rays to take control of the game. The comeback effort was admirable, but ultimately not enough.

A’s get their shot at redemption before the day is done.