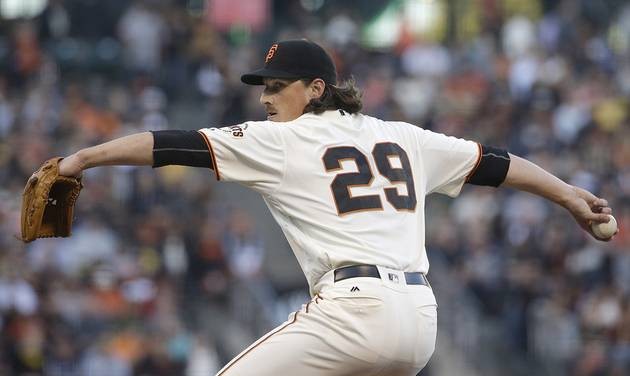 After what might be call a stressful (and perhaps exciting, perspective depending) day for the franchise, the A’s offense came alive in the first game of the Bay Bridge Series, leading the A’s to an 8-5 win.

The A’s and Giants traded blows in the first inning. After a pair of routine outs, Brandon Belt doubled and Buster Posey drove him in two pitches later. Down 1-0, the A’s struck back quickly. Matt Joyce walked to open the home half of the first, and Marcus Semien singled to follow Joyce. Jed Lowrie singled next, driving in Joyce and advancing Semien to third. With runners at the corners and nobody out, Semien scored via a Khris Davis sacrifice fly. Following a Yonder Alonso walk, the A’s had two runners on again, but were unable to extend their lead further.

After a couple unremarkable innings, the Giants’ big bats came through again in the fourth. Brandon Belt flew out to open the frame but the Giants then rattled off four consecutive singles, scoring twice and taking the lead back in the process. After the barrage of hits finished, Blackburn settled down and retired Nick Hundley and Gorkys Hernandez to end the inning with the A’s trailing by just a run.

Giants starter Matt Cain never really settled into the game. While he surrendered just two runs, he spent much of his time pitching out of the stretch, and the A’s never seemed more than a hit or two away from breaking the game wide open. In five innings of work, he allowed ten base runners on seven hits and three walks and struck out just one. Still, he kept San Francisco in the game and turned it over to the bullpen with the Giants 3-2 lead still in tact.

But the A’s attacked the Giants’ bullpen immediately. Following a Maxwell walk and a Matt Chapman line out, Melvin made the aggressive decision of pinch hitting Rajai Davis for Jaycob Brugman. The move paid immediate dividends; Davis doubled and just missed hitting a home run. Matt Joyce then worked a full-count walk to load the bases. The Giants made a pitching change – George Kontos replaced Josh Osich – but Marcus Semien didn’t care and mashed the third pitch he saw for a grand slam.

With a 6-2 lead and a fatigued bullpen, Paul Blackburn returned to the mound to begin the seventh inning. The Giants first hitter, Carlos Moncreif, doubled but was retired in a rundown just a batter later. After Nick Hundley chopped a slider back to Blackburn, Moncreif was caught in no-man’s land off second and was retired without any issue. But following a Gorkys Hernandez single, Blackburn was lifted for Daniel Coulombe with runners at the corners.

It was the smart move. Blackburn was nearing a hundred pitches and Coulombe was the only A’s reliever not to throw yesterday. The Giants had three consecutive lefties coming up too. But it didn’t quite work out. Although it could have been worse – Coulombe gave up just two singles and neither were hit terribly hard – you’d like our only lefty in the bullpen to retire an opposing team’s left-handed hitters with some consistency. But a left-handed specialist Coulombe is not; lefties have wOBA’d .292 against Daniel this year, just a tick below the .294 righties have put up against him.

Still, Coulombe turned the game over to Liam Hendriks with Oakland still leading 6-5. Hendriks did his part, striking out Buster Posey to end the seventh. Blackburn’s line isn’t a fair reflection of his contribution today. He’s credited with having pitched 6.1 innings, allowing 8 hits, a walk, and 5 earned runs. The most important of those stats is the innings Blackburn accumulated; his pitching into the seventh allowed half the ‘pen the night off. And his earned runs line might have looked better on another night.

But all is well that ends well. Hendriks would pitch a clean eighth, striking out another and allowing no base runners. And after the A’s loaded the bases in their half of the eighth, Ryon Healy plated two insurance runs with a two-out single, extending the A’s lead to 8-5. Blake Treinen pitched the ninth and earned his fourth save of the year.

It’s a good problem when the A’s have too many offensive stars to give all their due credit. Matt Joyce was 2-3 and also walked twice and scored twice. Semien scored twice and collected two hits too, including the aforementioned Grand Slam. Jed Lowrie was 3-4 with a walk. Yonder collected no hits but walked three times. And Ryon Healy was 2-5. All told, the A’s offensive outburst resulted from 12 hits and 9 walks.

Having taken the first Battle of the Bay match-up, the A’s look to sweep their half of the series tomorrow before it shifts West on Wednesday. Daniel Gossett gets the ball for Oakland; Matt Moore starts for San Francisco. First pitch is at 7:05. Goodnight everyone.