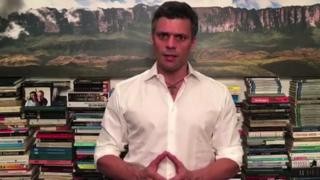 They were under house arrest after accusations of inciting violence during anti-government protests in 2014.

Their relatives said they did not know where the two had been taken.

The move comes just two days after a controversial vote for a constitutional assembly saw violence on the streets.

Days before the vote, Mr López had released a video on YouTube calling on Venezuelans to take to the streets in protest.

Mr López was transferred from a military prison to house arrest on 8 July after spending more than three years in jail.

His wife, Lilian Tintori, wrote on Twitter that Mr López had been taken from his home at 12:27 local time (04:27GMT).

She wrote that she would hold President Nicolás Maduro responsible if something were to happen to her husband.

The daughter of Mr Ledezma, Vanessa Ledezma, posted a video of her father, wearing pyjamas, being taken away by officers of the Venezuelan intelligence service, Sebin.