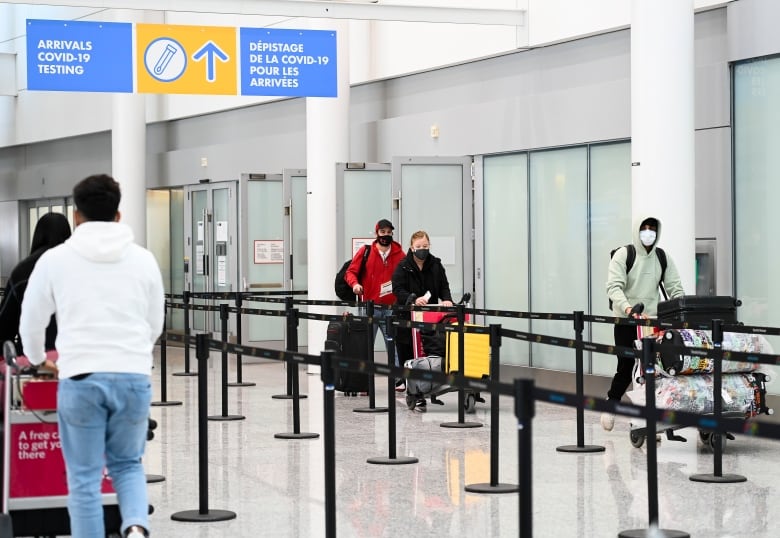 Ottawa now says that — starting Aug. 9 at 12:01 a.m. ET. — fully vaccinated U.S. citizens and permanent residents living in that country will be able to visit Canada without having to quarantine for two weeks.

The government said it then plans to open Canada’s borders to fully vaccinated travellers from all other countries on Sept. 7.

Officials also announced today that as of Aug. 9,  children under 12 — who aren’t yet approved to receive a vaccine — will be exempt from the quarantine requirement after entering Canada and can move around with their parents if they follow public health measures.

But those children are advised to avoid group settings such as school, camps and daycares — especially indoor ones.

“The key here is for parents or any travellers coming to Canada to understand what are the requirements and plan accordingly,” said a government official speaking on background to journalists today

“It is possible that they are attending tourist locations or activities — as long as things are outdoors, I think the risks are limited.”

Today’s announcement comes as a relief to expat Andrew Boggs, a fully vaccinated Canadian living in the U.K.

Because his spouse is a U.K. citizen, they haven’t visited Canada since the beginning of the pandemic and their two-year-old son has no memory of meeting his Canadian grandparents and uncles.

While Boggs said he’s been content to abandon in-person visits to protect his elderly parents, the prospect of an actual visit fills him with joy.

“It’s been so long and especially for my little boy, so much of his engagement with his relatives is tactile, is being able to be with them and touch them, and not having that for so long has been hard and particularly hard on my parents,” he said.

Foreign travellers entering Canada will need to present proof (in either English or French) that they’ve received a complete round of one of the vaccines authorized for use in Canada. That means two doses of either the Pfizer, Moderna or AstraZeneca products, or one dose of the Johnson & Johnson vaccine, at least 14 days before arriving.

Anyone entering Canada would also have to follow provincial and territorial public health measures.

WATCH | ‘This is a…careful and measured reopening of our border’: Minister

Those crossing the border still need to get a COVID-19 molecular test result before they arrive in Canada.

However, the government announced today that it plans to launch a new surveillance program at airports and land border crossings starting Aug. 9. Fully vaccinated individuals will not need a post-arrival test unless they have been randomly selected to complete a COVID-19 molecular test.

“This strategy allows the government of Canada to continue monitoring variants of concern in Canada and vaccine effectiveness,” says a government news release.

Even if they think they will be exempt, all fully vaccinated travellers will still need to have a quarantine plan in case a border official finds they do not meet the necessary requirements.

Unvaccinated or under-vaccinated travellers will still have to quarantine for 14 days.

Today’s announcement follows a previous easing of restrictions for Canadians. As of July 5, fully vaccinated Canadian citizens and permanent residents have been able to skip the 14-day quarantine requirement.

No similar announcement from the U.S.

The White House has not yet announced a reciprocal deal for Canadians.

“We are continuing to review our travel restrictions. Any decisions about re-opening travel will be guided by our public health and medical experts,” White House press secretary Jen Psaki said today.

“We take this incredibly seriously, but we look and are guided by our own medical experts. I wouldn’t look at it through a reciprocal intention.”

Democratic Rep. Brian Higgins said he’s disappointed that the U.S. has not followed Canada’s move to reopen the border.

“We’re going to continue to pressure the administration here in Washington that made very clear its plans to develop a plan to open the border,” Higgins told David Cochrane on CBC’s Power & Politics.

“The president owes the people of the United States and Canada an explanation as to reciprocity.”

WATCH | U.S. congressman says he will urge Biden to follow Canada’s lead and reopen the border

Democratic Rep. Brian Higgins says he’s disappointed that the U.S. has not followed Canada’s move to reopen the border. Higgins tells Power & Politics he will urge the White House to allow fully vaccinated Canadians to travel to the U.S. 1:16

Despite the lack of a similar announcement from the White House, Prime Minister Justin Trudeau said conversations with the U.S. government on border issues remain positive.

“We will continue to work with them, but understand and respect that every country makes its own decisions about what it does at its borders,” he said during a press conference.

Canadian Chamber of Commerce president Perrin Beatty said he’s pleased to see the border measures loosened but said there’s still confusion about how this will roll out.

“We are concerned that the costly and cumbersome procedures that remain for fully vaccinated travellers will discourage short visits, including many business trips,” he said in a statement.

“As these measures are implemented, we will need to address a number of outstanding issues for Canadians, including how to efficiently manage points of entry to avoid border congestion, what changes the U.S. government will make for Canadians travelling to that country and how the rules for unvaccinated minors will be applied. Most importantly, the ArriveCan app is a poor substitute for a secure system of interoperable digital health credentials.”

Prime Minister Justin Trudeau says fully vaccinated Americans will be able to come to Canada for non-essential travel as of August 9. They will not have to quarantine. 1:13

“For over a month, Conservatives, business groups and Canadians have been calling for the Trudeau Liberals to put forward metrics for a safe border reopening. It remains unclear what those metrics are and why they could not be shared with the business community well in advance of this announcement,” Stubbs said in a media statement.

NDP transport critic Taylor Bachrach said the party will be pushing the government for more details.

“Many sectors of our economy, especially the tourism sector, are suffering from the lack of a clear plan from the Liberals,” he said.

“People need clear guidelines and predictability so they can plan, rehire staff and prepare their business for a full reopening.”

Besides the rule change allowing fully vaccinated Americans to cross into Canada, a number of other changes will roll out on Aug. 9.

The Canadian government shut its border to foreign travellers and implemented strict measures for non-essential workers in March 2020. It later introduced a rule requiring a hotel stay for air travellers awaiting test results.

The government announced today that it’s scrapping the three-night government-authorized hotel stay requirement for all travellers on Aug. 9.

A Transport Canada official said the department is working with other airports to resume international flights.

Transport Canada also announced it has extended the Notice to Airmen (or NOTAM) that restricts all direct commercial and private passenger flights to Canada from India until August 21.