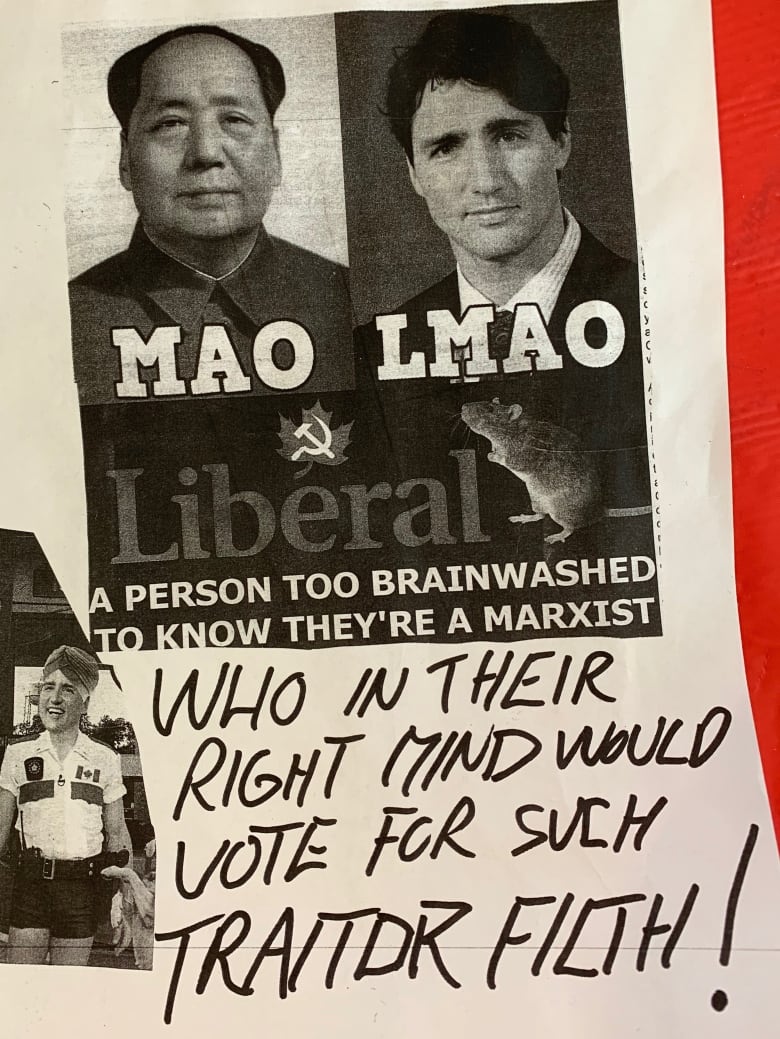 The Liberal Party candidate in Fort McMurray, Alta., says she’s concerned for the safety of her volunteers after someone glued offensive posters to the door of her campaign office.

The posters, which showed up Friday, attacked Liberal Leader Justin Trudeau. One included a picture of Trudeau in a turban, next to a swastika, with the words: “Who in their right mind would vote for such traitor filth.”

“To receive this kind of rhetoric, this racist, misogynistic, hate rhetoric today was extremely disappointing,” said candidate Maggie Farrington, who is running in the riding of Fort McMurray-Cold Lake.

Farrington said she had her son with her. “He looked at me and said, ‘What does this mean? Is someone trying to kill you?'”

RCMP are investigating the incident, and took the posters as evidence.

Farrington said she’s going to talk to her volunteers and let them know that they should never be alone in the office. She added that while she’s not necessarily scared for her own safety, she’s nervous for her volunteers.

“A lot of the folks coming in here from different ethnic communities, and the posters that were glued to our door would be deemed very threatening to those communities.

“I think we have to take safety concerns very seriously now, and we won’t be ever alone here.”

Farrington said she expected to receive some hate during the campaign, but not to this degree. She shared the incident on social media, and was heartened by the responses.

“Even folks that I know aren’t of liberal stripes, but want to have more civility in politics … they believe that this kind of hate, this kind of attack, has no place in Canadian politics.”

On Friday, People’s Party of Canada candidate Matthew Barrett even showed up at her office with muffins to show his support.

“Mr. Barrett and I will probably never agree on politics, but we will always agree that there needs to be more civility in politics,” Farrington said.

This is not the first time Farrington has been on the receiving end of hateful comments during the campaign. When she announced her candidacy on Twitter in August, dozens of people insulted her appearance and gender, some even compared her photo to that of baby Adolph Hitler.

Farrington has printed off all the mean tweets she receives and posts them on the wall of her office.