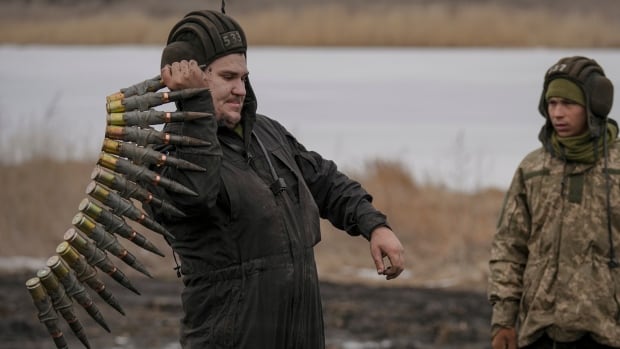 The federal government is urging any Canadians still in Ukraine to leave the country now that the U.S. has said that Russia has enough troops massed to launch a major invasion.

“As we continue to work closely with our partners and monitor the situation, I urge all Canadians in Ukraine to make the necessary arrangements to leave the country now,” Foreign Affairs Minister Mélanie Joly said in a media statement.

The federal government has been telling Canadians to avoid traveling to Ukraine since the beginning of February.

The statement says that diplomatic and consular staff will remain in the country to offer help to any Canadians that remain behind.

Earlier Friday, Prime Minister Justin Trudeau warned Russia that Western nations are ready to impose “severe” sanctions if it invades Ukraine. He said he was hoping for a peaceful resolution to the growing crisis.

“We’re not seeking confrontation with Russia but we’re resolved to stand firm with the Ukrainian people’s right to determine their own future,” Trudeau said.

As diplomatic options for averting war in Ukraine appeared to narrow, the White House said U.S. President Joe Biden and Russian President Vladimir Putin would discuss the crisis by phone on Saturday.

While Biden has said the U.S. military will not enter a war in Ukraine, he has threatened severe economic sanctions against Moscow in concert with allies.

U.S. officials said they don’t know whether Putin has decided to invade but that Russia’s buildup of air, land and sea firepower near Ukraine has reached the point where he could start an invasion on short notice.

Biden’s national security adviser Jake Sullivan urged all Americans in Ukraine to leave within the next 48 hours. He said they should not expect the U.S. military to rescue them in the event that air and rail transportation is crippled by a Russian invasion.

Several NATO allies, including Britain, Norway and Denmark, are also asking their citizens to leave Ukraine. Sullivan said Russian military action could start with missile and air attacks, followed by a ground offensive.

“Yes, it is an urgent message because we are in an urgent situation,” he told reporters at the White House.

Global Affairs Canada is asking all Canadians in Ukraine to sign up with the Canadian government’s register of citizens living abroad so they can reach out with information if and when the situation on the ground changes.

Joly said that any Canadians still in the country can reach embassy staff in Ukraine or federal officials in Ottawa to ask for help.