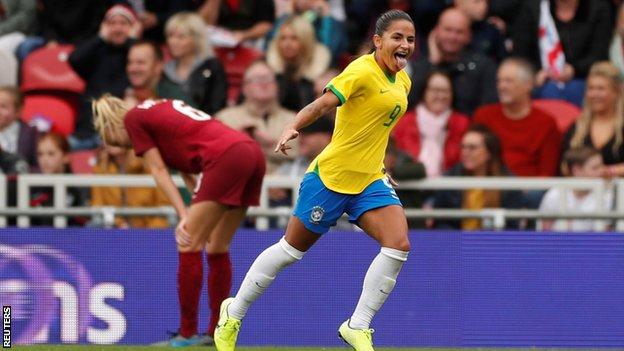 Boss Phil Neville said a fourth defeat in five games was “not acceptable” as England’s World Cup homecoming was spoiled by Brazil in front of a record crowd.

Despite being roared on by 29,238 fans at Middlesbrough’s Riverside Stadium – a new record for a Lionesses match outside Wembley – England conceded two poor goals as their winless run extended to 100 days.

Debinha scored both but was the beneficiary of an error by England goalkeeper Mary Earps, who let the striker’s header slip under her four minutes after the break.

It got worse midway through the second half when Debinha’s shot was deflected up and over the helpless goalkeeper.

And although substitute Beth England lifted the crowd with a brilliant header, her first England goal, Brazil held on for a clinical win under new manager Pia Sundhage.

Having beaten Brazil a year ago, and in February at the SheBelieves Cup, this was another blow to Neville, whose side last won a game in the World Cup quarter-final against Norway in June.

Since then, England have conceded eight times from crosses, with both Debinha goals from this route, and although Neville praised his side’s first-half display where they went close to scoring three times, he said the continuation of their defensive frailties was a “wake-up call”.

Neville said: “The only thing missing from our game was the ruthlessness. Losing four out five games is not acceptable and I don’t want to brush around that but I can take comfort from the way we performed.

“We are getting punished for every little mistake we are making and it’s a wake-up call for us. We can have all the possession in the world but the fundamentals still exist in keeping clean sheets and doing jobs you cannot neglect.”

Brazil – who are ranked 11th in the world, six places below England – did not trouble the hosts for long spells on Saturday, but after soaking up pressure in the first half, they had the killer touch the Lionesses lacked.

England face Portugal on Tuesday, and Neville will hope his side can get back to winning ways before his team host Germany in front of what is set to be a record crowd for a women’s match at Wembley on 9 November.

England’s first game in the north-east since 2014 was also the first chance for supporters to see the team at home after reaching the World Cup semi-finals.

Since then, England have struggled in friendlies against Belgium and Norway, but with Jill Scott returning to the side after being rested and Jordan Nobbs back in the squad after nine months out with a knee injury, the hosts looked a lot more solid in midfield.

However, in an open first half where England were on top, they lacked the final touch to take the lead as they created several chances in front of an expectant support.

Beth Mead, who returned to the club where she spent six years at Middlesbrough’s centre of excellence, was at the heart of the action as she set up Nikita Parris for a golden opportunity, before shooting wide herself from a narrow angle.

Jodie Taylor, who started up front instead of England’s injured top scorer at the World Cup Ellen White, also had the ball in the back of the net – but it was ruled out for offside before she chipped over when an earlier shot might have been the easier finish.

Neville’s side were made to pay for those missed opportunities as they struggled to impose themselves after going behind shortly after the break.

Chelsea striker England gave them hope as she showed she belongs at international level by heading in from 12 yards following Steph Houghton’s diagonal ball.

Lucy Staniforth, one of seven players from the local area in the squad, also had a header well saved by Barbara late on – but the crowd, who were desperate for an equaliser, finished the game disappointed.

Despite the result, Neville said his team had not lost their momentum from the World Cup where records numbers of supporters tuned in on TV.

The head coach said: “That was the best atmosphere I’ve seen at a women’s game. It felt like a carnival, there was a buzz in the air and it really inspired our players.

“I’m sure fans have gone home convinced they have seen a really good football team play unbelievably well but not got their rewards. Five games without a win is disappointing, and we want to reverse that on Tuesday, but I’m not concerned about the performance, that gives me hope.”

One of the big attractions to watching Brazil was a chance to see six-time Fifa Player of the Year Marta, but the 33-year-old is not at the peak of her powers now and rarely threatened.

In fact, the highlight of her game was being booked for a tackle on Parris.

Swedish coach Sundhage, who led the United States to two Olympic golds, showed she had no room for sentiment by substituting Marta at half-time, and it looked a wise choice as Brazil stunned the Riverside into silence shortly after the interval.

Debinha had had a quiet game in the first half, but came alive in the second, in part thanks to Manchester United goalkeeper Earps, earning her seventh cap.

After the two goals, Brazil were able to kill the game by keeping hold of the ball, and they showed the kind of tactical prowess often seen under Sundhage, who is rated as one of the best coaches in the women’s game.

They finished the game in delight, and having been knocked out of the World Cup at the last-16 stage by hosts France, Sundhage has given them fresh hope as she searches for more success at the Olympics next year in Tokyo.

Player of the match – Debinha

Shots on Target
Home8
Away3

Attempt saved. Lucy Staniforth (England) header from the centre of the box is saved in the top left corner.

Kathellen (Brazil) wins a free kick in the defensive half.

Attempt saved. Beth England (England) header from the centre of the box is saved in the bottom right corner. Assisted by Beth Mead with a through ball.

Goal! England 1, Brazil 2. Beth England (England) header from the centre of the box to the bottom right corner. Assisted by Stephanie Houghton.

Aline Milene (Brazil) is shown the yellow card for a bad foul.

Offside, Brazil. Thaisa tries a through ball, but Ludmila is caught offside.

Debinha (Brazil) wins a free kick in the defensive half.

Goal! England 0, Brazil 2. Debinha (Brazil) right footed shot from the centre of the box to the top left corner. Assisted by Bia Zaneratto.

Rachel Daly (England) is shown the yellow card for a bad foul.

Bia Zaneratto (Brazil) wins a free kick in the attacking half.

Jodie Taylor (England) wins a free kick in the attacking half.

Ludmila (Brazil) is shown the yellow card for a bad foul.

Attempt blocked. Jodie Taylor (England) left footed shot from the left side of the box is blocked. Assisted by Beth Mead.

Attempt saved. Jordan Nobbs (England) right footed shot from outside the box is saved in the bottom left corner.

Attempt missed. Ludmila (Brazil) header from the right side of the six yard box misses to the left. Assisted by Luana with a cross following a corner.

Attempt saved. Lucy Bronze (England) right footed shot from outside the box is saved in the centre of the goal.