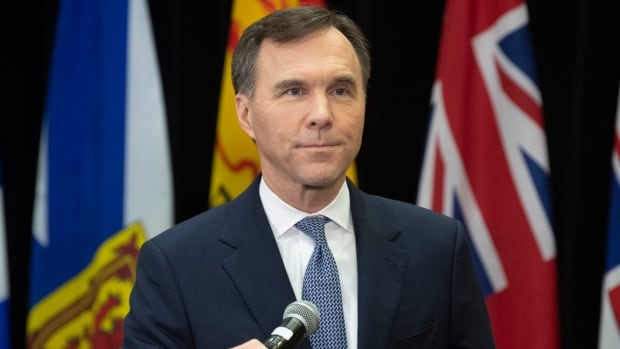 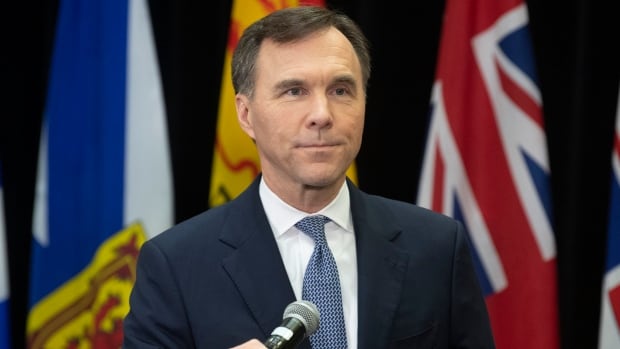 Finance ministers to discuss CPP, health transfers and improving stabilization program today
Finance Minister Bill Morneau will meet with his provincial and territorial counterparts today to discuss the state of the economy and how they can all work together to boost the strength of some key government programs, including the Fiscal Stabilization Program.

On his way into a dinner with the finance ministers Monday evening Morneau said that he was also looking forward to discussing potential changes to the Canada Pension Plan.

“We have some issues of national concern that we want to talk about; the Canada Pension Plan and how it can be enhanced, potentially, for the benefit of Canadians,” he said.

The finance minister is scheduled to address the media Tuesday at 3:30 p.m. ET after a day of meetings with premiers in Ottawa. CBC.ca will carry the event live.

Morneau said he is expecting the finance ministers to use Tuesday’s meeting to make their pitch to the federal government for updating the stabilization fund.

The Fiscal Stabilization Program is a relatively small federal program, that provides financial assistance to provinces facing a year-over-year decline in non-resource revenues that are greater than five per cent.

The maximum a province can receive under the program is $60 per person and the provinces of Alberta, Saskatchewan and Newfoundland and Labrador, which have been struggling economically since global oil prices began declining in 2014, want that cap lifted so stabilization will better reflect today’s realities.

“Obviously this program hasn’t been changed since 1995, so we are open minded with respect to how it works, or the changes people might propose. And once we have those, we’ll take that into consideration and do some analysis of our own,” Morneau said Monday.

Ontario’s Minister of Finance Rod Phillips said he was also looking forward to speaking with Morneau about increasing the federal health transfer as well as presenting the premiers’ requests on stabilization.

“I think we have something to put forward, a great starting point,” said Phillips of stabilization. “It reflects, particularly, the emphasis that Alberta and Saskatchewan and Newfoundland and Labrador have brought forward.”

“I thank Minister Morneau for putting it on the agenda, which was a request that we made. Obviously the federal government will need a chance to look at it, evaluate it and then respond.”

Phillips said that more has to be done to help provinces that are facing economic challenges.

Quebec’s Finance Minister Eric Girard told reporters Monday that his province is backing the demand for changes to a stabilization that have been asked for by oil-producing provinces.