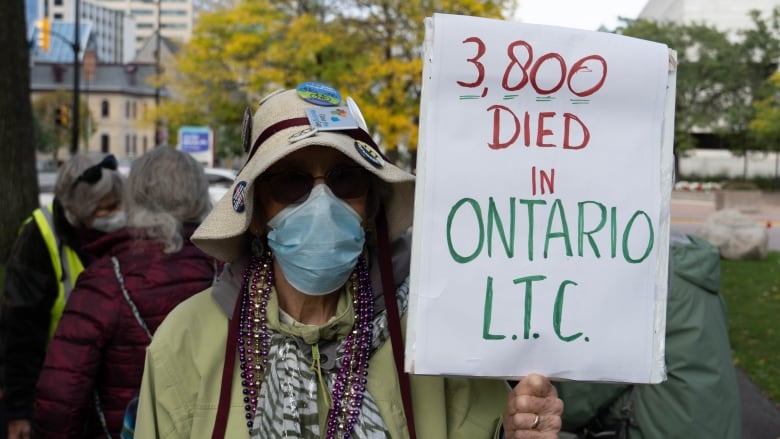 When the surge of COVID-19 cases began to hit long-term care homes in the spring of 2020, nursing home workers were calling Ontario’s Ministry of Labour, Training and Skills Development to blow the whistle on unsafe working conditions, according to documents obtained by CBC News.

In response, the ministry, tasked with ensuring the safety of workers in the province, advised its inspectors to conduct field visits by phone — even as outbreaks in long-term care facilities multiplied.

“I feel that they let us down,” said a worker from a Revera-run nursing home, who asked not to be named for fear of reprisal.

“If they would have actually been able to come in and see the environment that we were working in, and see how people were suffering, they would have seen the health and safety inadequacies that were happening.”

Through a freedom-of-information request, CBC News obtained from the ministry the health and safety reports from nine long-term care homes in eastern Ontario, covering the period between March and November 2020.

Many of the documents — including reports from some of the region’s hardest-hit homes — contain hundreds of blacked-out pages.

But the emails, reports and handwritten notes still illustrate key issues at several homes as the pandemic began, including complaints about a lack of proper protective equipment (PPE), poor communication with staff, fear of reprisals for speaking out about issues and concerns about staffing shortages.

Over the past year-and-a-half, close to 1,000 nursing home workers in Ottawa alone have tested positive for COVID-19. Some were among those hospitalized. Some have never returned to work. Three workers in the region died.

In reports from Stoneridge Manor, in Carleton Place, Ont., which experienced its first outbreak in early April 2020, a nurse wrote to the ministry on April 6, concerned about a “lack of appropriate measures and procedures to respond to COVID.”

One resident had already died and staff members were getting sick.

The nurse called the situation “very dangerous,” and asked the ministry to interview “all the RNs on site … by attending the workplace.” Records show a field visit was done by phone two days later, on April 8.

Over the course of the pandemic, 53 residents in the 60-bed facility have tested positive for COVID-19 and six died. Thirty workers tested positive and several were very ill.

When asked by CBC about the lack of on-site visits in the early days of the pandemic, Ontario’s Ministry of Labour, Training and Skills Development said in a statement its inspectors “have conducted over 3,170 COVID-19 field visits in the long-term care sector, issuing over 1,100 orders” since March 2020.

In regards to the phone “field visits,” the ministry said: “On March 16, 2020, under advice from the Chief Medical Officer of Health, the ministry paused most in-person field visits in long-term care homes while information about the pandemic was evolving.”

CBC also asked Revera about the concerns outlined in the documents regarding the company’s homes in eastern Ontario. A company spokesperson declined to comment.

“There are pending lawsuits involving Revera long-term care homes in Ontario. As such, out of respect for the courts and the legal process, it would not be appropriate for Revera to comment,” the spokesperson said in a statement.

Workers in several homes, including Stoneridge, complained about a lack of access to PPE, including high-grade N95 masks.

At Carlingview Manor, in Ottawa, reports also note that workers were wearing garbage bags instead of gowns.

“They ended up locking up all of the masks, so the nurses didn’t have access to it,” said a worker from another Revera home, referring to the N95 respirators.

Instead, she said, nurses and personal support workers (PSWs) were given one surgical mask to last an entire shift.

“We had to use those same masks to see every single patient. So whether we were in a COVID-positive room or not, we were still wearing the same mask.”

At Madonna Care Community in Orleans, Ont., two employees died after contracting COVID-19 in the spring of 2020.

“One died within a week of being tested. We all broke down and cried,” said a worker at the care home, who asked not to be named for fear of retribution.

The documents show an anonymous complaint was made to the Ministry of Labour on April 15, 2020, warning that Madonna was “not taking necessary precautions and practices to protect workers from contracting COVID-19.”

The complaint said there was a lack of proper PPE, including N95 masks that were locked away, and a lack of contact tracing and surveillance.

Twelve days later, on April 27, a ministry inspector conducted a field visit by phone. In the meantime, a Madonna staff member had died on April 21. Another worker died in May.

No fatality reports or any details about the staff deaths are included in the Ministry of Labour documents; 40 of the 93 pages concerning Madonna Care Community were blacked out.

‘No sense of urgency’

“There was no real sense of urgency or understanding or acceptance of how critical the situation actually was. And in the case of Madonna, you know, that situation proved to be fatal — not just for workers, but for … several residents as well,” said Candace Rennick, a former PSW and an executive with CUPE Ontario, which represents some of the workers in the affected long-term care facilities.

“The phone investigations, the delays — all of that proves what people have been feeling, which is that the system didn’t have their back.”

When asked about access to PPE and staffing shortages, the parent company of Madonna, Sienna Living, said: “During the first wave of the pandemic, there was a global shortage of personal protective equipment.”

The company noted that staffing continues to be a challenge as “many front-line workers have chosen to leave the field.”

“We are strongly focusing on recruiting front-line providers within this highly competitive space by offering full-time hours, ongoing education and training,” the company said.

With most long-term care residents and many workers now fully vaccinated, the number of cases and outbreaks inside Ontario’s care homes have dropped significantly.

Yet workers tell CBC they’re still woefully understaffed, and many continue to work long shifts with few breaks. Even before the pandemic, turnover in the field was high due to difficult working conditions and low wages.

For 15 years, she worked in housekeeping and as a personal support worker in a long-term care home. Bailey said it’s important work that requires compassion and empathy — and more than a few weeks of training.

“They sit by the bedside with some of these residents [as] they take their last breath. And that’s what scares me is if we don’t get better, if the government doesn’t do something, all those staff will be gone.”

On Wednesday, Ontario announced it is setting aside up to $270 million to hire more than 4,000 long-term care workers by the end of the fiscal year.