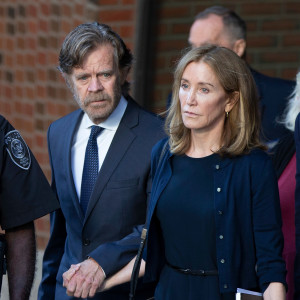 Felicity Huffman was seen smiling and wearing a prison uniform as her husband, William H. Macy, visited her at the Federal Correctional Institution in Dublin, California, where she is serving time for her part in the college admissions scandal.

Felicity Huffman and William H. Macy: A Timeline of Their Lasting Relationship

TMZ and the Daily Mail posted pics of the Desperate Housewives alum, 56, wearing dark green pants and a matching shirt along with black and white Under Armor sneakers, glasses and a watch, with her hair tucked up under a white cap on Saturday, October 19.

Huffman, who didn’t appear to be accompanied by guards, was spotted stepping out of a building at FCI Dublin in northern California to meet up with Macy, 69, and their daughter Sophia, 19.

The actress reported to prison on October 15 to begin her 14-day sentence after she pleaded guilty to fraud charges following her arrest for paying $15,000 to improve Sophia’s SAT scores. She was also ordered to pay a $30,000 fine, and will have to complete 250 hours of community service and be on a year of supervised release after she leaves the prison, which a former inmate told Us Weekly is “not cushy at all.”

Everything We Know About the College Admissions Scam

“I would like to apologize to my daughter, my husband, my family and the educational community for my actions. And I especially want to apologize to the students who work hard every day to get into college, and to their parents who make tremendous sacrifices supporting their children,” Huffman said in a statement after she was sentenced in September. “My goal now is to serve the sentence that the court has given me. I look forward to doing my community service hours and making a positive impact on my community. I also plan to continue making contributions wherever I can well after those service hours are completed.”

“I am ashamed of the pain I have caused my daughter, my family, my friends, my colleagues and the educational community,” she continued. “I want to apologize to them and, especially, I want to apologize to the students who work hard every day to get into college, and to their parents who make tremendous sacrifices to support their children and do so honestly.”

Fuller House alum Lori Loughlin and her husband, designer Mossimo Giannulli, were also indicted in the college admissions scandal. They are accused of paying $500,000 to ensure that their daughters, Bella, 21, and Olivia Jade, 20, would be recruited as part of the crew team at the University of Southern California, despite the fact that neither plays the sport.

Loughlin, 55, and Giannulli, 56, pleaded not guilty to fraud and money laundering charges in April and face a maximum sentence of 20 years in prison. They and other parents indicted in the investigation are headed to trial next year.