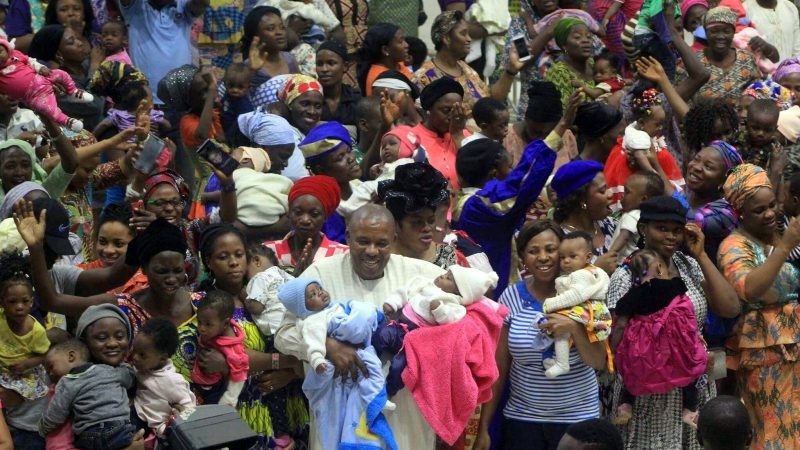 A lady in one of the departments of the Redeemed Christian Church of God (RCCG) at the Redemption Camp did everything to stay away from the last Holy Ghost Service of the church.

That day, she finished her work quickly, made arrangements for her quests but refused to join them for the service. She disappeared.

“God has blessed me with enough children, so I don’t want to be there when Daddy (Pastor Enoch Adeboye) prays for babies,” she had explained.

She didn’t have to explain. There is a saying among church faithfuls at the Camp that warns people to be careful about which of Pastor Adeboye’s prayers they say “Amen” to. The lady didn’t have to participate in prayers for babies when she didn’t need more.

The thousands of mothers who had been barren but took their babies to the altar for dedication by Pastor Adeboye at the 65th Annual Convention was also an eloquent reason for the lady to disappear. From all corners of the large Arena, joyous women streamed to the altar that night. In the end, an estimated pool of thousands of mothers had gathered there, some of them shedding tears of joy.

The scene at the old auditorium that was beamed on the screen showed a similar pool. The same exercise was done at other viewing centres.

“I rejoice with you all because my father visited your wombs and gave you joy,” he had said as he prayed for them.

Also, during the convention, 106 babies were‎ delivered at the church’s clinic at the camp.

At the church’s monthly Holy Ghost services, testimonies of happy couples proudly displaying their babies are regular occurrences. Usually, as soon as they were beamed on the monitors, the congregation erupts with joy. The longer the waiting, the louder the shouts of Halleluyah.

One night, a woman, Julie Onawiena, caused a stir of excitement with her testimony: “I was 11 years barren after marriage and I had been to many places –herbalists, churches and hospitals- in search of the fruit of the womb. In one of those places, an herbalist made me swallow 7 boiled eggs in a minute; and in one church they bathed me in the night and told me to walk backwards without looking back. All that yielded nothing. In one hospital in Abuja, where I live, I was told after a thorough examination that I had no fallopian tubes.

“In one of the Church’s programmes in1995, Daddy GO relayed a word of knowledge he had received from God that there was a woman in the congregation who had no fallopian tubes but God was going to give her one. I jumped at it. I made a vow to God that if He blessed me with a child, I would name him Samuel and return him to God, when he clocked 20 years, to serve Him. In June this year, the child born without fallopian tubes was 20, and I came to give Samuel to God as I vowed.”

But in a church, where many women who had no wombs got pregnant and delivered healthy babies, some of those testimonies could perhaps be described as only routine miracles. In the book, STORIES OF PASTOR E.A. ADEBOYE, there are many of such testimonies that made the September, 2017 Holy Ghost Service at the two auditoriums at the Redemption Camp and at viewing centres across the world so special. Below is one example.

A couple needed a child desperately but doctors told the husband that his wife could not bear children because her womb was closed. During one of our programmes years ago, the Almighty God said, “There is somebody here who has been told you can never have a child, but you are going to have a set of twins.”

The woman jumped up and said, “Glory be to God! That must be me.”That month, she became pregnant even though doctors had said it was not possible. A few months after, the doctor examined her again and said, “Well I don’t understand but there is a baby in your womb, I can see it clearly.”

The woman said to the doctor, “No, no, God didn’t say one, God said twins.”

“Hmm, the one we think we are seeing, we are not even sure yet. Well come back later,” the doctor said.

She went back a month or two later. The doctor declared, “Well, there are two here.”

As the day of delivery drew near, because they were quite well to do and they didn’t want to take any risks, the couple travelled out of the country for the birth. The hospital did a Caesarian operation on her. When the woman recovered, she noticed everybody looking at her as if she was from Mars.

She asked, “What is the problem, where are my babies?”

They said, “There is nothing wrong with your children, they are fine.”

“So why are you all looking at me like that?” she asked.

“Wait for the doctor,” they answered.

The doctor came and said, “I have performed about 3,000 surgeries, but this is the first time that I have delivered set of twins from a woman without a womb. No womb!”

Pastor Adeboye said, “After a Holy Ghost Night in Dublin, a woman who had been barren for years joined in the rush of women to sit on the chair I had used so that they could be pregnant as they had heard in many testimonies. But one man took the chair away.

“The woman was sad but she quickly remembered that I had used the pulpit. She then rushed to the pulpit and robbed her stomach against it. That same month she became pregnant. And when she was testifying, she showed three children – two boys and a girl – as evidence.”

Babies! On that day, first timers, including a lady called Ada, waited patiently to see how the miracles are hatched. The day was also for people who had been waiting on the Lord for special miracles. After the usual prayers, praise and worship, the first ministration by Pastor Adeola-Mensah, who is also a Special Assistant to Pastor Mrs. Folu Adeboye, wife of Pastor Adeboye, appropriately ‎dwelt on how to wait on God. She recommended increased and persistent praying, increase in praise; never losing faith; avoiding faith extinguishers; speaking the word of God; and taking authority.

The session was followed by music ministration from the Mass Choir and then the special hour. There is rapt attention anytime Pastor Adeboye mounts the pulpit. He calls for prayers to praise God, kneels down to sing and pray‎, and then bellows out the signature call: “Now, let somebody shout Halleluyah!”
The theme for the night was Abba Father 7, a continuation of the Abba Father series, which started earlier in the year.

As usual, the sermon was in two parts – the first being an introduction for the call to the altar for salvation. ‎He never misses the call even at social functions when he gets the opportunity to speak. On this night salvation was particularly compulsory because God, the source of miracles, is holy. Hundreds of people rushed to the altar at the count of 10. Many women of over 40-year-old were noticeable in group.