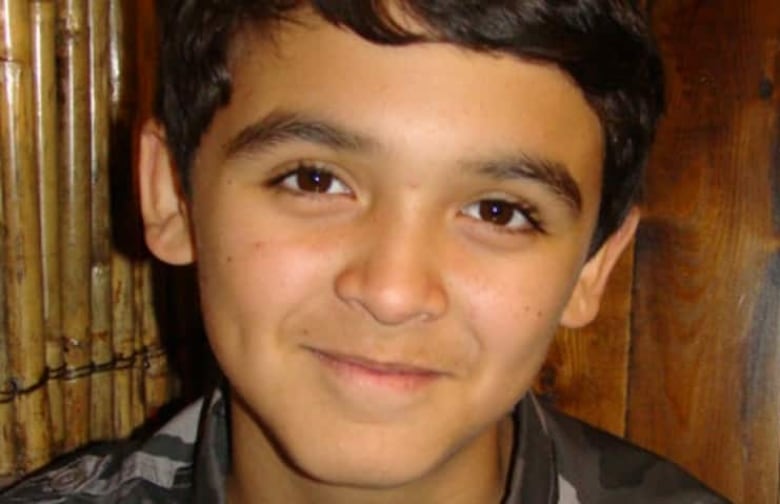 Newfoundland and Labrador’s ground search and rescue inquiry heard testimony Tuesday in Makkovik, with 14-year-old Burton Winters’s stepmother calling for answers, nine years after the boy froze to death on the sea ice after abandoning his stuck snowmobile.

Burton’s family, and others in the small Inuit community on Labrador’s northern coast, said at the time they believed the boy missed a turnoff on a trail in 2012 and rode his machine toward the sea when he was snowmobiling home from his grandmother’s house.

However, his machine got lodged in the sea ice, and Burton walked 19 kilometres in the wrong direction before succumbing to frigid conditions.

“We’re shocked that nearly after a decade after losing Burton that we are here,” Natalie Jacque, Burton’s stepmother, told the inquiry.

The family has been vocal for more than nine years about what they have described as an indifferent response from agencies tasked with protecting public safety, particularly on why it took it took two days to put military aircraft in the air to look for Burton.

Witnesses from the government of Canada, the RCMP and the Department of National Defence are expected to testify this week before Commissioner James Igloliorte.

An internal RCMP investigation found that the force acted appropriately during the search, including during the critical hours of the first day, a Sunday.

In 2012, CBC News reported on audiotapes obtained under access-to-information legislation that showed RCMP officials disagreeing about whether it was reasonable on a Sunday night to enlist the needed help of provincial emergency officials for military air support.

Inquiry was promised in 2015

The Liberals promised an inquiry upon taking power in 2015, although it did not formally start until this week. Its mandate is to look at search and rescue capability broadly. The first day of hearings on Tuesday was dedicated to the Burton’s case, which attracted national headlines.

Jacque said Burton’s death should have resulted in “immediate attention.” She said there needs to be an acknowledgment of jurisdictional responsibilities for sea ice search and rescue, with less red tape when searching.

“Why hasn’t the death of our child been enough to start implementing change?” said Jacque, who described the family’s anger as they fought for answers.

She told the inquiry search and rescue organizations tried to explain and defend what happened.

“At what stage did Burton’s rescue fail? We believe it was in between the agencies,” Jacque said. “A slip-up that all of Burton’s family and friends will forever have to pay [for] and that Burton himself had paid the ultimate price. A child in need is dire, always.”

Jacque said the family simply wants improvements in search and rescue and people to learn from Burton’s death.

“Burton deserved a chance at life,” she said.

The inquiry will, in part, look at why search and rescue crews didn’t reach Winters in time.

Barry Andersen, the ground search and rescue co-ordinator, told the inquiry Tuesday that Burton was a “very inexperienced snowmobiler” and unfamiliar with the area, leaving them unsure of his direction of travel.

Another searcher, Cyril Lane, said weather conditions were so bad he could barely see his search partner 20 metres away.

“Even with head and taillights on the snowmobiles, we were losing sight of one another,” he said.

Two hunters said they witnessed snowmobile tracks heading out onto the sea ice.

“We were damn lucky that the snowmobile track was picked up the first evening because it would not have been found the second day,” searcher Perry Dyson told the inquiry.

The searchers picked up the trail onto the sea ice on Jan. 30, but it led to a more than 18 metre gap in the ice with open water, leaving them to assume the worst.

Private helicopters from Woodward and Universal tried to find tracks on the other side of the gap, with no luck, and turned their attention to scouring the water as visibility remained low.

An RCMP helicopter found Burton’s snowmobile the following day, 2½ kilometres away from the open water. Additional air help came that night on Jan. 31. Burton’s body was found the next day, Feb. 1.

Andersen said the search group had requested help from Joint Rescue Co-ordination Centre helicopters but were told there was nothing available.

Some reports submitted as exhibits to the inquiry say the military didn’t think the weather was good enough to fly while other reports say they were not called back when the weather cleared.