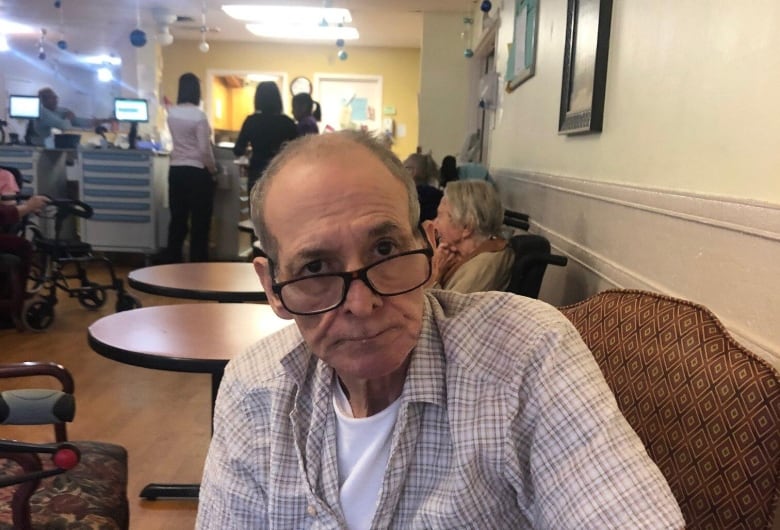 It was a haunting scene. A small group of mourners gathered at the Elgin Mills cemetery in Richmond Hill, Ont. They had come to say goodbye to 65-year-old Robert Thoms.

And as his family laid pink and white roses on the casket, something else was achingly missing too. Peace.

Thoms’ family says there is no peace with this ending.

“You put your loved one in a home, counting on them to take care of your loved one. You’re putting their lives in their hands,” says Thoms’ sister Susan Hynes, stifling a sob. “And this is what we got for it. It’s just terrible. It’s inhuman.”

Her brother, Hynes says, was a gentle soul, a retired building engineer who battled cancer and then dementia. Robert Thoms had lived at Extendicare Guildwood in Toronto’s east end for seven months. The long-term care facility has been in lockdown since mid March, and on April 23 it reported an outbreak of COVID-19.

To date, the vast majority of the 159 residents have been infected and nearly 50 have died from the virus, including Thoms.

His family is one of several taking legal action against the home, suing it for neglect and failing to provide basic care.

“If it changes things for the better, that’s what it’s about,” says Thoms’ brother Bill. “Please change things so that our elderly become visible people and not hidden.”

On the family’s calls to check in after the lockdown began, staff had told them Thoms was OK. But when the home allowed window visits last month, the first time his siblings were able to see him, they were shocked. He was emaciated.

“We saw somebody that I didn’t recognize in a hospital bed. It took me a couple of minutes to grasp the situation, and the gravity of the situation,” says Bill Thoms, in a quiet voice. “You could see his days were numbered.”

The siblings shouted through the window for help, and a staff member came and told them their brother hadn’t been eating or drinking. Hynes demanded someone bring her brother a glass of water. Then, she says, they watched him gulp it down.

“He drank a glass and half of water,” Hynes says. “He was looking at me trying to tell me something, then he’d look at them, and it looked to me like he was very surprised that they were giving him the water.”

It was a disturbing glimpse into a long-term care home in crisis. And it wasn’t the only one.

On a recent afternoon, Michelle Wilson came to the facility with a bouquet of flowers in memory of her 85-year-old father. Her grief is overwhelming, so is her outrage.

If it had happened in an animal facility where animals were dying to the percentages that have happened in this home, there would have been an uproar. Because it’s seniors, it’s almost as if their lives don’t matter.”​​​​​​– Michelle Wilson

Her father’s life had been full of adventure. As a young man, David Johnson worked on merchant ships in his native Trinidad, before coming to Canada where he settled into the hospitality industry. He moved into Extendicare Guildwood three years ago, after a series of strokes and a broken hip.

Johnson was recovering well, had started to walk and his memory was coming back, Wilson says. Then the COVID-19 outbreak hit the home, and Wilson says panic set in.

“It’s everyone’s worst nightmare, for anyone that we love to be locked into a facility where there are cases and you’re reliant on their efforts and their expertise to contain it.”

She says the home reassured families the outbreak was contained to the east wing of the building. Her father was in the west wing, and in a private room, presumably even safer.

Wilson says she and her siblings kept calling to check on him, but the phone would just keep ringing.

“We learned afterwards that it was because the staff was getting infected. And so they were short-staffed, and it was evidence because we couldn’t get anyone on the phone. We were trying to be sympathetic and patient and cooperative, but it reached a point where we realized that, no, you know, it’s that something’s cracking here. Something’s not functioning properly in the management of this outbreak.”

That point came at a window visit in May. Wilson says her father was unresponsive and then she heard him cough. She called out for staff, who checked on him and told her he was fine, just tired. Wilson and her siblings insisted he be tested for COVID-19 and that they be allowed inside on palliative grounds.

When Wilson saw her father, she says he had sores on his arm and his lips were cracked. She put a wet sponge to his mouth to give him some water. He wouldn’t let it go.

They were the last words he said to her before he died.

Wilson says her father didn’t get the basic care he deserved, and it’s why she is suing the home.

“This virus was one thing and it was progressing fast. But how was he to fight it when he’s dehydrated and not even getting food or drink or anything?” she says.

At a recent protest outside the facility, devastated family members circled quietly, many carrying photographs of their dead loved ones. They want answers, and accountability that some say is already overdue. Provincial inspections last year before the pandemic found the home was dangerously short-staffed, putting its residents at risk.

Da Cruz says her 86-year-old mother Theresa, born in India, was widowed young and worked in factories here to provide for her daughters. Da Cruz took care of her for four-and-a-half years, until Theresa’s mobility worsened and she needed 24-hour care. Moving her to a care facility was a tough decision, and it would turn out to be a tragic one.

Theresa Da Cruz moved into Guildwood the day before the lockdown. She had her own phone at the facility and would speak to her daughter regularly. On a call in late April, she reassured Audrey that she was OK, but that her roommates had a fever.

Two weeks later, the home called Audrey Da Cruz to say her mother also had a fever. It was only then that she found out about the outbreak, which had started two weeks before.

“I was shocked and horrified,” Da Cruz says, her voice breaking. “The hardest part was not knowing that it was happening, because I have no doubt in my mind that we would have gone there on the very same day that we found out. I wouldn’t have cared about whether she had a bed to go back to, at that point it was life and death. Obviously, we would have got her.”

Da Cruz says she was appalled to find out her mother’s sick roommates were never moved out.

“These people, they were sitting ducks. They [the facility’s managers] could have done anything — they could have called in help, they could have built a structure in the parking lot and separated the positive and the negative people. Like, it doesn’t seem logical to me, if you can’t stand beside someone in a grocery store line, how does it make sense to keep positive and negative seniors in a room together 24 hours a day?”

Da Cruz is suing the home for failing its duty of care, and for failing to protect her mother.

“I wish that I’d never put her there. I wish we had been able to go and get her, bring her back here. I don’t know if I’m ever going to be able to get over that. It’s like a nightmare.”

CBC News shared the families’ stories with Extendicare Guildwood. It responded with a statement saying it does not speak publicly about specific residents, but gave its condolences to those who’ve lost loved ones.

It also acknowledged that, “There were challenges around staffing,” which the home said it has since addressed by hiring dozens of new staff and getting support from hospital partners to bolster its infection control, including cohorting all residents and deep-cleaning the facility.

Extendicare Guildwood says it is also handing over the day- to-day management of the facility to the Scarborough Health network, a local health agency, until the outbreak is stabilized.

Wilson says it’s all the more painful because she feels her father and other residents were treated as if they were disposable.

“Because they’re seniors, it’s almost as if their lives don’t matter. It’s like they’ve lived a long enough life and they’ve had a full life, and so it’s OK.”

At the cemetery, as a quiet ceremony ends, Susan Hynes leans close to her brother’s casket and whispers, “I love you.” For her family, too, this is both a day of mourning and of reckoning.

“He didn’t deserve to die like he did,” she says. “Nobody deserves to die like that. It breaks my heart.”