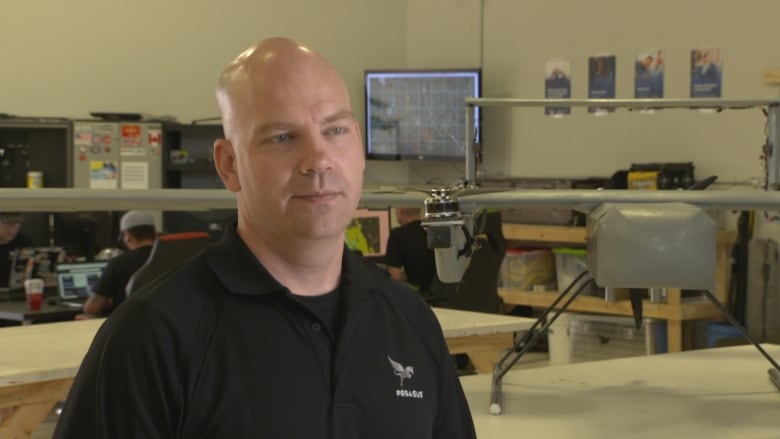 An aerospace startup company near Edmonton has patented technology it believes can help step up the game of fighting wildfires and other natural disasters.

Pegasus Imagery, based in Villeneuve, Alta., about 35 kilometres northwest of Edmonton, has built three high-tech drones that can fly up to 10 hours — about three times longer than most helicopters on a tank of fuel.

Tackling out-of-control wildfires in Alberta typically involves a helicopter crew sent out in the morning to visually gauge the state and size of the fire, said Cole Rosentreter, who founded the company three years ago.

That process can take several hours to get the information back to the command base, Rosentreter said.

Pegasus Imagery’s team of mechanical and aerospace engineers have helped develop and build proprietary drones, that are equipped with radar and infrared sensors to take high-definition video and produce maps almost in real-time.

“Did the winds change at 3 a.m.? Well, that will actually affect how you’re going to look at deploying your people on the ground.”

That could be of enormous benefit to the boots-on-the-ground crews, Rosentreter said.

“Get ahead of the problem. And the only way to do that is with real-time information and covering that window, especially the night shift,” he said. “We’re able to take that information and deliver it directly to people in the field.”

The unmanned aircraft is equipped with patented sensors that can detect and manoeuvre around obstacles like flames and other aircraft.

Many municipalities use smaller, basic drones to gather information during fires and in follow-up investigations.

They can typically run about 35 minutes and take snapshots of a scene to be downloaded later for analysis.

Brian Cornforth, fire chief of Parkland County, called on Pegasus in May to take thermal imaging of the 22,000-hectare fire west of Tomahawk, Alta.

“It put us a couple of hours ahead of the day’s fire activity,” Cornforth said in an interview Thursday.

They were able to get that information directly to the field staff’s smart devices and save hours of resources in the field.

“Finding those hot spots early is extremely important because we can action a fire and keep it down in size and that’s very cost-effective for us,” he said.

Cornforth said it costs about $5,000 an hour to hire a helicopter, which would fly during daylight hours.

Instead of four people searching on the ground for several hours to narrow down the hot spots, he said he can get an accurate picture from the drone’s thermal imaging.

“It saves me that much more work,” Cornforth said. “That’s where I’m going to recover that cost.”

Rosentreter said similar technology is used in other countries, but it’s not common in Canada.

Pegasus is also using its drones in other industries. The company has done work for energy companies to detect leaks in pipelines and has supported military training exercises, he noted.

Rosentreter said he’s lobbying the provincial and federal governments to adopt the technology, which he says will be the future of fighting wildfires.

“In the last 25 years, I’ve been to major events where that type of technology would have been very helpful for us,” Cornforth said.

In an email statement, St. Onge said they’re looking for alternative ways to work in conditions when it would be unsafe for people to fly, like at night and in heavy smoke, fog or rain.

There’s no timeline for a potential contract, she said.