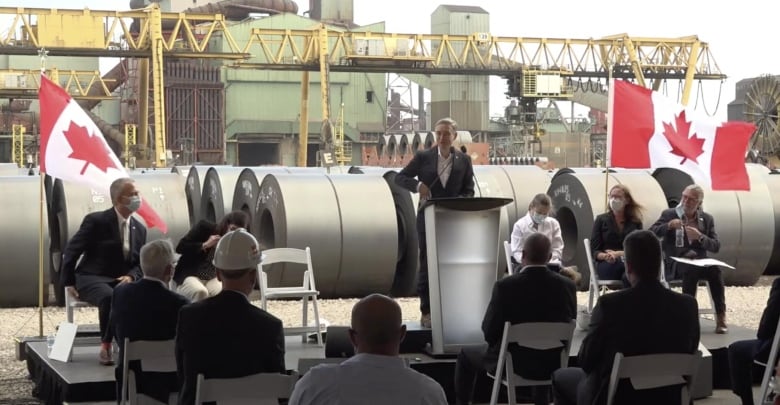 The federal government has announced $400 million for a project at ArcelorMittal Dofasco that the company says will help it cut carbon emissions by more than half.

Deputy Prime Minister Chrystia Freeland, along with Innovation Minister François-Philippe Champagne and Minister of Labour Filomena Tassi, made the announcement at the Hamilton steelmaker on Friday.

The government said its investment is part of a $1.765-billion project to phase out coal-fired steelmaking and is expected to reduce greenhouse gas emissions by up to three million tonnes per year by 2030. The goal is to have the project completed by 2028.

“This is a historic day for Hamilton,” said Tassi, MP for Hamilton West-Ancaster-Dundas, who worked at Dofasco in the summers while she was a student. “A transformational day.”

Dofasco intends to use the funds to transition to electric arc furnaces, which use scrap metal, electricity and natural gas to make steel, as opposed to blast furnaces, which use coal and iron ore. Officials said the retrofit would create 2,500 construction jobs and “secure” thousands of jobs at Dofasco “for years to come.”

Champagne said the new furnaces will keep the company on the leading edge as the world transitions away from fossil fuels, help Canada become a global leader in clean steel and keep steelmaking jobs in Hamilton.

“A green recovery… is what the markets are looking for, what customers are demanding and what we as a government want to support,” he said. “The world’s steel industry emits seven per cent of global emissions, equal to the global aviation, shipping and chemical [industries’] emissions combined, so… we needed to take action.”

The project depends on funding from the provincial government as well, according to Tony Valeri, ArcelorMittal Dofasco’s vice-president of corporate affairs. Those discussions are ongoing and have been “positive,” he said, adding he expects they’ll continue.

Aditya Mittal, CEO of ArcelorMittal, said he looks forward to the provincial government “stepping up.”

At the time, Trudeau teased a similar announcement would soon be made in Hamilton.

The funding announced in Hamilton comes from the Strategic Innovation Fund and its Net Zero Accelerator.

The government said the combined reductions in greenhouse gases from both projects will lower emissions by up to six million tonnes a year.

That’s the equivalent of taking 1.8 million vehicles off the road, “almost the number of passenger vehicles in Toronto, Montréal and Vancouver combined,” according to the release.

Mittal, CEO of ArcelorMittal, said the announcement marks the “beginning of a new era of steelmaking in Hamilton that will result in a 60 per cent drop in CO2 emissions within the next seven years.”

She said the city aims to reduce emissions by 50 per cent by 2030, so completing this project by 2028 would be hugely impactful.

The three-million-tonne reduction annually would nearly be a 30 per cent reduction of Hamilton’s emissions overall. It’s one piece of the puzzle, but a very big piece.– Bianca Caramento, Mohawk College’s Centre for Climate Change Management

“The three-million-tonne reduction annually would nearly be a 30 per cent reduction of Hamilton’s emissions overall,” she said. “It’s one piece of the puzzle, but a very big piece.”

In advance of the announcement, company spokesperson Marie Verdun called decarbonized steelmaking “central to ArcelorMittal’s long-term strategy.” She pointed out the company has already started efforts on this front in its European operations.

ArcelorMittal Dofasco says the new furnaces could later be used for a transition to hydrogen fuel, a process that can produce net-zero emissions — depending on the provenance of the hydrogen and electricity used — and leaves only water vapour as a byproduct.

“The fact that they have adopted a technology that will be able to accommodate hydrogen in the future is very forward-looking,” said Caramento.

The company’s phaseout of coal will also mean “a tremendous improvement” for local air quality, said Bruce Newbold, chair of Clean Air Hamilton and a professor of geography at McMaster University.

“A very large proportion of Hamilton’s air emissions are associated with industry and the burning of fossil fuels, including coal…. We can expect to see improvements in the level of pollutants such as sulphur dioxide, nitrogen dioxide and particulate matter.”