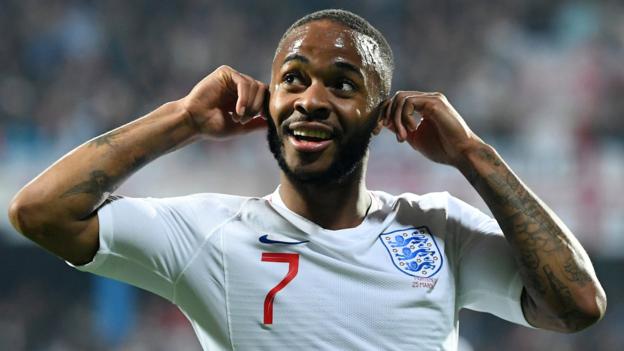 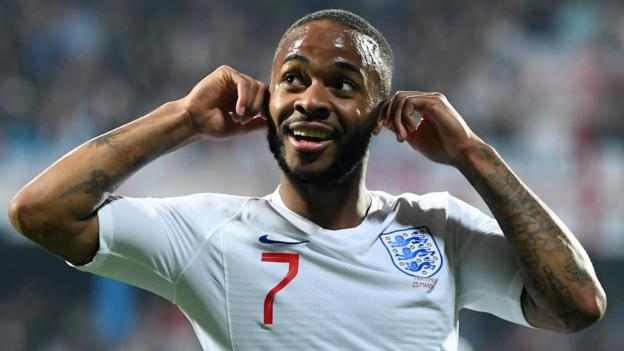 England winger Raheem Sterling says players should not leave the pitch if there is racist abuse from the stands because “if you walk off they win”.

Sterling, 24, was one of several England players to have racist chants directed at them during last month’s Euro 2020 qualifier in Montenegro.

He responded by putting his hands to his ears after scoring in the 5-1 win.

“To win the game would hurt them even more. They’re only trying to get you down.

“If you walk off they win. To score or win would be better.”

Sterling was called a “trailblazer” in being named sportsman of the year at the 2019 British Ethnic Diversity Sports Awards on Saturday in recognition of repeatedly speaking out against racism in football.

However, he said: “I don’t think I can make a difference – it’s something that happened before I was born and before my parents were born.

“As much as I can do is raise awareness.”

Sterling, who has won 53 caps for England, acknowledged the guidance of his mother in standing up to racist abuse.

“When I hear it, I’m black, I’m proud and I’m confident about my body,” he said.

“My mum has always told me to be proud of myself and told me I’m a wonderful black child.

“I’ve never really heard it in London. It was mainly when I went up north to Liverpool. I started to hear it a few times.”

Defender Danny Rose, another England player who suffered racist abuse in Montenegro, later said he “can’t wait to see the back of football” and is frustrated at the lack of action taken against racist fans.

Tottenham’s Rose, 28, said England manager Gareth Southgate was “fully behind” him if he wanted to walk off but that he “just wanted to get the three points and get out of there as quickly as possible”.

Sterling said he “respects” Rose’s view but it is a “shame” to hear his international team-mate was looking forward to retiring.

“It’s something he’s come across a number of times and it’s probably getting too much for him. Not everybody can take it the same way,” said Sterling.

“We spoke after the national team game and as a team. We haven’t since then.

“It’s about speaking about what you’ve experienced and some people have probably shied away from that, but if something is not quite right I’ll speak about it.”

There have been a number of high-profile instances of racism in football in recent months, including:

‘I will do everything I can to help’

Tottenham manager Mauricio Pochettino said he “will do everything” in his power to “try to stop” racism in football and wider society.

“We are here trying to help everyone – it’s a thing we are of course fighting all together to try to stop,” he said.

“We need to stop it not only in football but in all different areas and situations.”

The Argentine said he was “very sorry” for Rose and Sterling but said they can use their platform to speak out against racism.

He said: “How many people outside cannot say anything, but only go home and cry?

“That is a thing that I hate and I will do everything in my power to try to stop.”