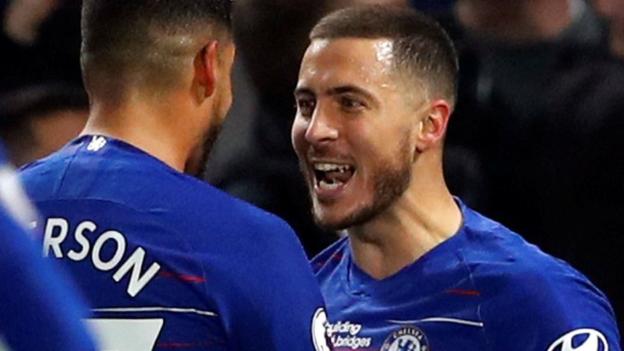 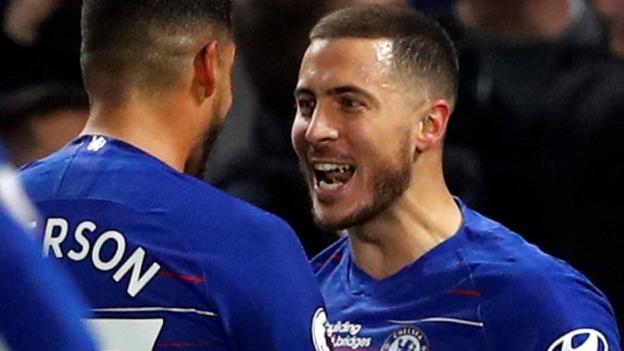 Eden Hazard scored one of the goals of the Premier League season as Chelsea beat West Ham to climb above Tottenham and Arsenal into third spot in the race for a Champions League place.

Hazard, who has been strongly linked with a move to Real Madrid this summer, evaded five players during a stunning run, before the Belgium forward calmly beat keeper Lukasz Fabianski.

He added a late second goal to cap a magnificent individual performance in an entertaining game at Stamford Bridge.

Gonzalo Higuain hit a post, while Hazard was denied a penalty after what looked like a foul by Marko Arnautovic, with Argentine midfielder Manuel Lanzini going closest for West Ham with a shot which was beaten away by Kepa Arrizabalaga.

Chelsea, who can still qualify for next season’s Champions League by winning the Europa League, are three points ahead of fifth-placed Arsenal – who have a game in hand – after a third successive league win.

The Hammers remain 11th after a third defeat in four league games.

Will Hazard be at Chelsea next season?

On a day fresh reports circulated about Hazard moving to Spain’s capital, the 28-year-old produced a breathless performance to show why he is one of Europe’s best forwards.

He was outstanding from start to finish against the West Ham, inspiring his side to an 11th top-flight win at Stamford Bridge this season, and received a standing ovation from Chelsea fans at the final whistle.

In the space of a few first-half minutes, Hazard scored his 15th – and arguably best – league goal of the season, produced a wonderful pass which saw Higuain hit a post, and appeared to be fouled by Austria forward Arnautovic inside West Ham’s penalty area.

To the bewilderment of Hazard and Chelsea, referee Chris Kavanagh waved away the home side’s appeals.

Hazard’s opening goal was beautiful, the Chelsea player receiving the ball just inside the Hammers’ half before using both feet during an unstoppable run which ended with the ball in the net.

His second, a powerful low finish, sealed a deserved win for Maurizio Sarri’s side.

Hazard’s contract expires in the summer of 2020 and Blues fans will hope the club do not cash in on their prize asset after Real Madrid boss Zinedine Zidane admitted he has “always appreciated” the Chelsea player.

With the London club hit with a Fifa transfer ban preventing them from signing players until the end of January 2020, Chelsea would have to wait to spend any money if they did decide to sell Hazard – though they are appealing against the punishment.

Blues crank up pressure in race for Champions League

It is just over a week since some Chelsea fans called for Sarri’s sacking during a narrow win at struggling Cardiff City.

Since then the Blues have gone on to record clean-sheet victories against Brighton and now West Ham to strengthen their push for a top-four finish.

This was a night when Chelsea turned on the style, with Hazard very much the standout performer.

Callum Hudson-Odoi also sparkled on just his second league start and N’Golo Kante oozed class as the hosts played with confidence and a swagger they have struggled to produce on a consistent basis under Sarri.

With away games at Liverpool and Manchester United to come, the Italian’s side still have work to do in the final five matches to finish in the top four.

However, they can look forward to hosting Champions League games next season if they can maintain the level of performance they produced against London rivals West Ham.

Safe but another Hammers defeat

West Ham’s hopes of finishing in the top seven for the second time in four seasons are fading after a ninth away league defeat.

Manuel Pellegrini’s debut season in charge of the Hammers has been a story of inconsistency.

They have produced impressive home wins over Manchester United and Arsenal, but frustrating results away from London Stadium mean they could yet finish the campaign in the bottom half of the table.

They were second best to Chelsea in the first half before improving after the break.

Lanzini, Aaron Cresswell and Arnautovic all went close before Hazard’s second goal ended any hope of a positive result.

West Ham have five games remaining and Pellegrini will want to ensure the season does not fizzle out.

However, with matches at Manchester United and Tottenham, as well as a trip to FA Cup finalists Watford, they face a tough test to turn around their poor away form.

‘Hazard was devastating’ – what they said

Chelsea manager Maurizio Sarri, speaking to BBC Sport: “In the first half, we were in full control of the match and I was not happy with the result at the end of the half, we could have scored more.

“In the second half, we were in trouble for only 10 minutes but then in the last part of the match we were in control and we deserved to score the second goal.

“In the previous match, Eden Hazard has played really well too. He was devastating. When Hazard can play like this, we are lucky.”

West Ham boss Manuel Pellegrini: “We improved a lot in the second half. They scored that second goal finally and the difference was the first half.

“When a player has the quality of Eden Hazard, you know he can make different things. But we could have done better in the way we defended that goal and our play.

“We changed things and we had a chance to draw. I saw the personality in the second half but in the first half, no.”

Hammers goal drought away from home – the stats

Chelsea are back in action as early as Thursday when they travel to face Slavia Prague in the Europa League quarter-final first leg (20:00 BST kick-off), while West Ham are at Manchester United in the Premier League on Saturday (17:30).