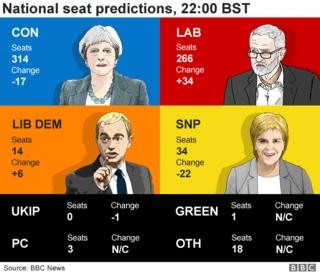 Britain’s Conservative Party will be the largest party but may not have a majority after the UK’s snap general election, an exit poll says.

The survey taken at polling stations across the UK suggests the party could get 314 MPs when all the votes have been counted after Thursday’s poll.

Labour would get 266, the Lib Dems 14, UKIP none and the SNP 34, the NOP/Ipsos MORI poll for BBC/ITV/Sky suggests.

The pound fell sharply in value after the exit poll was published.

Early results are suggesting a swing to Labour – but it is too early to say whether the exit poll is accurate.

Veteran Conservative MP Ken Clarke said he believed his party would have a “small overall majority” when all the votes have been counted.

The final election results are expected by Friday lunchtime.

A total of 650 Westminster MPs will be elected, with about 45.8 million people entitled to vote. A party needs 326 seats to have an overall majority.

Prime Minister Theresa May – who had a small majority in the previous parliament – called the snap election to try to strengthen her hand in negotiations with the European Union on Brexit.

But if the exit poll is borne out by results, analysts say the PM will have made a serious miscalculation.

The pound fell sharply after the exit poll as traders had been expected a clear victory for Mrs May’s party with an overall majority in the House of Commons.

The exit poll suggests the Conservatives will be 12 seats short of an overall majority.

It suggests Labour will gain 34 seats, the Conservatives lose 17 seats, the Lib Dems will gain six and the SNP lose 22 seats in Scotland.

The Green Party would be unchanged with one seat and Plaid Cymru still have three MPs in Wales, according to the poll.

In total, 30,450 people were interviewed as they exited from 144 polling stations across the UK.

If the exit poll numbers are correct, Theresa May played a high risk political game and has lost it – she didn’t have to call this election, and only did so in order to give herself a mandate and breathing space during the bumpy ride of Brexit.

Just a few weeks ago at the start of all of this she seemed unassailable, but a shaky campaign and an insurgent Labour Party may have dashed the Tories’ hopes.

This exit poll result is not what either of the parties were predicting privately – this would be another political surprise – the public again defying the expectations of both the main sides.

The Conservatives do look set to be the largest party, it’s not clear on these numbers if they will be able to govern alone. Theresa May’s promise throughout was to offer her catchphrase “strong and stable leadership” – instead she may end diminished – but only of course the real results will determine through the course of the night what really happens next.

The Conservatives could still secure an overall majority if, as the exit poll suggests, they perform relatively well in constituencies that Labour are defending where a majority of the electorate voted Leave in last year’s EU referendum.

They would also need to do better in marginal seats they are defending.

If neither of these patterns materialises, but the exit poll’s estimate of the overall levels of support for the parties is correct, then the Conservatives could lose their overall majority.

In addition, there is some evidence from the exit poll that the Conservatives will perform relatively well in Wales.

If the exit poll is correct the SNP could suffer heavier losses than were widely anticipated in advance of polling day.

Indeed this, together with clear evidence of a Conservative revival north of the border, may yet provide the Tories with the extra seats that they might need to secure an overall majority.

Why the election matters – it’s all about Brexit

The election will largely determine the UK’s negotiation policies in upcoming negotiations with the EU on Brexit.

Theresa May was against Brexit before last year’s referendum – but now says there can be no turning back and that “Brexit means Brexit”.

The reason the prime minister gave for calling the election was to strengthen her hand during the negotiations.

The Conservatives’ priorities were set out in a 12-point plan published in January and the letter formally invoking Brexit in March.

The key elements include:

The Labour Party campaigned against Brexit in the referendum but now says the result must be honoured, and is aiming for a “close new relationship with the EU” with workers’ rights protected.

The party has set out several demands and tests it says Brexit must meet. These include:

Where UK’s parties stand on Brexit

What about a possible impact on the UK economy?

When the election exit poll was revealed, the pound immediately dropped by 2% as investors took a position that a hung parliament was a possible outcome, writes BBC’s Economics Editor Kamal Ahmed.

Why would that lead the currency to decline? Because a hung parliament means that the government’s direction of travel would be less certain.

Deals would have to be done. And those vital Brexit negotiations could become all the more difficult.

The future of the UK economy could be confused by a fog of political to-ing and fro-ing, our editor says.