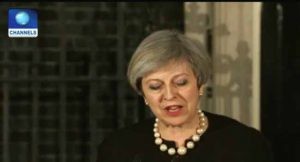 Britain’s opposition Labour Party overturned a large majority to win the seat of Kensington in west London from Prime Minister Theresa May’s Conservatives on Friday, the final of 650 seats to declare its result.

Labour was declared the winner of the seat, where the Conservatives previously had a majority of more than 7,000, by just 20 votes, after several recounts.

It means the final tally of seats won by May’s Conservatives is 318, short of the 326 needed for a majority in parliament. Labour won a total of 262 seats.

New Member of Parliament For Kensington, Emma Dent Coad, said, “”Clearly, this election was not all about Brexit. Not around the country and not in this constituency.

“The people of Kensington have spoken and they voted for someone they trust and who will give them a voice. They voted for me because they know I care and I will speak out for them as I have for the last 11 years. I will challenge the council to join us in the 21st century.

“I will continue to work with the GLA (Greater London Authority) to make our air cleaner, reduce traffic make our streets safer, and address our appalling housing crisis. I will take Kensington’s issues and problems to parliament to improve the appalling and unforgivable inequalities here in Kensington.

“This constituency is a microcosm of everything that is wrong in this country after seven years of incompetent and uncaring coalition and Tory government. I will do everything in my power in the next five years to make one Kensington an example of the finest qualities of common humanity mutual respect for all our communities and social justice to create a thoughtful, kind, co-operative and tolerant society where we can all prosper and thrive.”