In Egypt Ceremony marks 75 years since El Alamein battle as country mourns Delegates from former foes Saturday marked 75 years since the pivotal WWII battle of El Alamein that saw the Allies turn the tables in North Africa, as host country Egypt mourned the killing of dozens of its policemen. 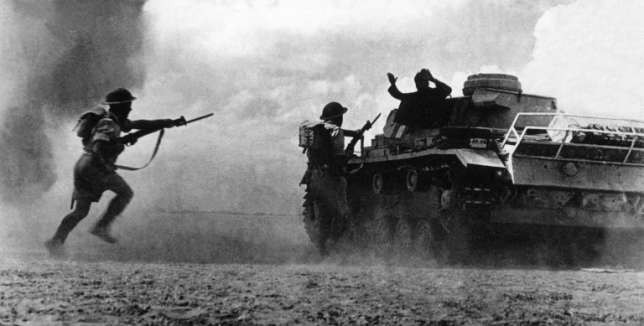 Delegates from former foes Saturday marked 75 years since the pivotal WWII battle of El Alamein that saw the Allies turn the tables in North Africa, as host country Egypt mourned the killing of dozens of its policemen.

The commemoration, held under tight security, was marred by an Islamist attack Friday on Egyptian security forces some 250 kilometres (155 miles) to the south that killed at least 35 police officers.

Officials from 35 nations paid their respects in a ceremony at a Commonwealth cemetery on Egypt’s Mediterranean shore that holds the remains of more than 7,000 soldiers from the victorious British-led force.

In a speech, the British ambassador to Egypt, John Casson, hailed “the sacrifices of those who gave their lives here… and thanksgiving for acknowledgement that, in the end, evil will not prevail”.

Australian Army’s Chris Purdie salutes before a grave during a ceremony to mark 75 years since the pivotal WWII battle in the town of El Alamein, 100 kilometres (62 miles) west of Egypt’s coastal city of Alexandria

“This will be a place to remember those who fallen 75 years ago but also remembering those who are still dying and falling,” said Casson.

Casson paid his respects to “especially those who lost their lives in this despicable terrorist attacks yesterday” in an ambush in Egypt’s Western Desert that medical and security sources said killed at least 35 policemen.

President Abdel Fattah al-Sisi was scheduled to attend events in El Alamein on to mark the anniversary, but an AFP reporter did not see the strongman leader at an open-air ceremony involving foreign dignitaries.

Sisi’s office said he had cancelled his participation in a number of other engagements.

The World War II Battle of El Alamein — which began on October 23, 1942 — pitched the forces of British Field Marshal Bernard Montgomery’s against the Afrika Korps of Germany’s Erwin Rommel.

Egyptian presidential guards at a ceremony to mark 75 years since the pivotal WWII battle in the town of El-Alamein, west of Alexandria

The defeat of the German and Italian troops put an end to the ambitions of Hitler and Mussolini to take over the port of Alexandria on the Mediterranean and the Suez Canal.

The battle was a major turning point in the war, halting the advance of the Axis in North Africa and paving the way for the final victory there the following year.

“Now this is not the end. It is not even the beginning of the end. But it is, perhaps, the end of the beginning,” British leader Winston Churchill said famously in the wake of the victory.

The event on Saturday was attended by representatives from Commonwealth countries that made up the Allied force, including Australia, New Zealand, India and South Africa, and those who were their sworn enemies at the time.

Organisers from the Commonwealth War Graves Commission called the commemoration the“largest for many years” and said it “is likely to be the last on this scale”.