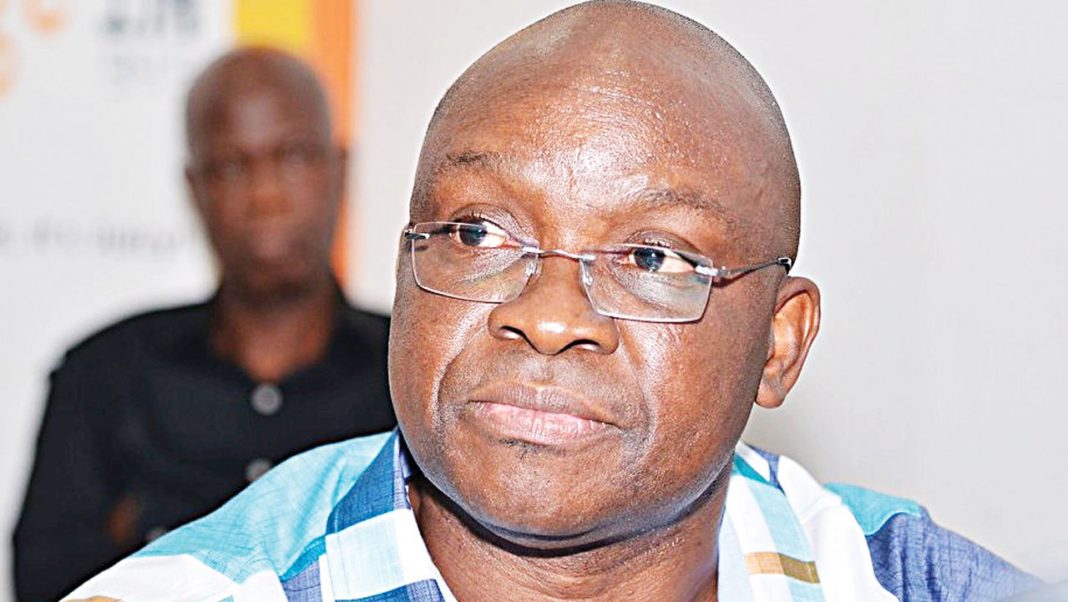 The Centre for Anti-Corruption and Open Leadership, CACOL, has reacted to the arraignment of former Governor of Ekiti State Governor, Ayodele Fayose.

CACOL lauded Fayose’s arraignment at the Federal High Court in Lagos on Monday over alleged fraud and misappropriation of N30.8bn, which came after the expiration of the ex-governor’s immunity from prosecution.

In a statement forwarded to DAILY POST by its Coordinator for Media and Publications, Adegboyega Otunuga, CACOL recommeded speedy trial of the former Governor, while calling on other public office holders to learn from Fayose’s predicament.

The centre said, “It would be recalled that the immediate past governor of Ekiti state, Ayodele Fayose, had, on October 16th, the very day his tenure elapsed, submitted himself at the Economic and Financial Crimes Commission, EFCC’s Headquarters, in Abuja, for offences that border on corrupt enrichment and diversion of public funds, part of which includes allegedly receiving N1.3bn (One Billion, Three Hundred Million Naira) from the former Minister of State for Defence, Musiliu Obanikoro which was used to allegedly rig the 2014 Ekiti state governorship election in his favour.,

“We would also recollect that, on the following day of submitting himself to the EFCC’s office in Abuja, the anti-graft agency approached a Federal High court to obtain an order of detention and subsequent arraignment in court within two weeks which was duly granted.

“This was followed up by his arraignment in court, earlier today for misappropriation and diversion of public funds totalling N30.8bn. Our organization, CACOL, as an anti-graft coalition, takes keen interest in this elongated corruption issue that involves a notable politically-exposed person (being a former governor) and commends the EFCC for following due process in taking the ex-governor into custody and his eventual arraignment.

“Without any prejudice or emotion about all the melo-drama that has characterized this high-profile corruption case, we expect the EFCC to have done its preliminary findings and investigation, well enough to diligently prosecute this matter and leave no stone unturned in recouping almost all of the public funds that must have been criminally siphoned and misappropriated. In similar vein, we recommend speedy trial and avoidance of undue judicial filibustering to enable the generality of ordinary Ekiti people, who have been at the receiving end of the fleece of their scarce resources, to heave a sigh of relief and rekindle their long lost hope in the ability of the system to redress social ills, irrespective of whose ox is gored.

“It is pertinent to also note that the arraignment and subsequent prosecution of ex-governor Fayose, is a signal to all office holders today, that no matter how long it takes to enjoy ‘immunity’ and thereby escape justice, the people’s power would always catch up with those whose pride is in betraying people’s mandate and trust that conferred power and public till unto them as nobody could permanently run away from their shadow.”