Wowplus
Home Gossips ‘EFCC does not have any evidence to prosecute Fayose in court’ –... 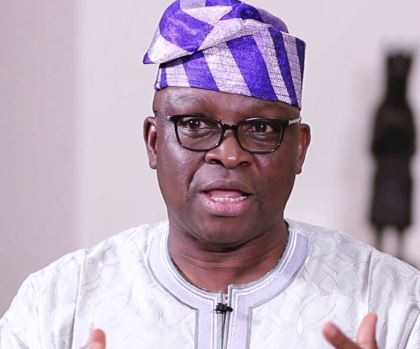 Report by a section of the media that the immediate past governor of Ekiti State, Ayodele Fayose, had started opening up on allegations of corruption made against him by the Economic and Financial Crimes Commission (EFCC) has been described as false, misleading and a feeble attempt by the anti-graft agency to sustain its lies and campaign of calumny against the former governor.

Fayose’s Media Aide, Lere Olayinka, who reacted in a statement issued on Friday, said “no amount of sponsored media reports will change the fact that as at today, the EFCC does not have any evidence to prosecute the former governor in court.”

Olayinka insisted that his boss will only defend himself in the law court, saying that EFCC had demonstrated that it was out to persecute the former governor ostensibly because of his criticism of the President Muhammadu Buhari led APC government.

He said; “it is a fact that Fayose wrote to the EFCC on September 10, 2018 notifying the commission of his decision to make himself available on October 16, 2018. The EFCC replied by asking him not to wait till October 16 and that he should come on September 20, 2018.

“Therefore, isn’t it funny that the same EFCC that was desperate to have Fayose report on September 20 is still keeping him in detention, four days after he willingly submitted himself? Isn’t it now clear to all discerning minds that EFCC is only acting as an agent of persecution against perceived enemies of the APC and it is helping to keep Fayose out of circulation as desired by the powers that be?”

While urging members of the public to disregard any report of Fayose saying anything other than demanding that he be charged to court, Olayinka said; “Very soon, the public will still be fed with stories like; Fayose writes confessional statement and eats it, he weeps in detention, begs to return loots among other familiar lies of the EFCC.

“Nigerians should just ignore the EFCC’s sponsored lies and continue to ask why the anti-graft agency has failed to charge Fayose to court despite the overwhelming evidence it claimed to have. Most importantly, Nigerians should be rest assured that Fayose will not be intimidated even if he is detained for as long as the EFCC will be ready to take him to court. He won’t say more than what he has said which is denying the EFCC allegations and that the anti-graft agency is more of a persecutor than prosecutor.”