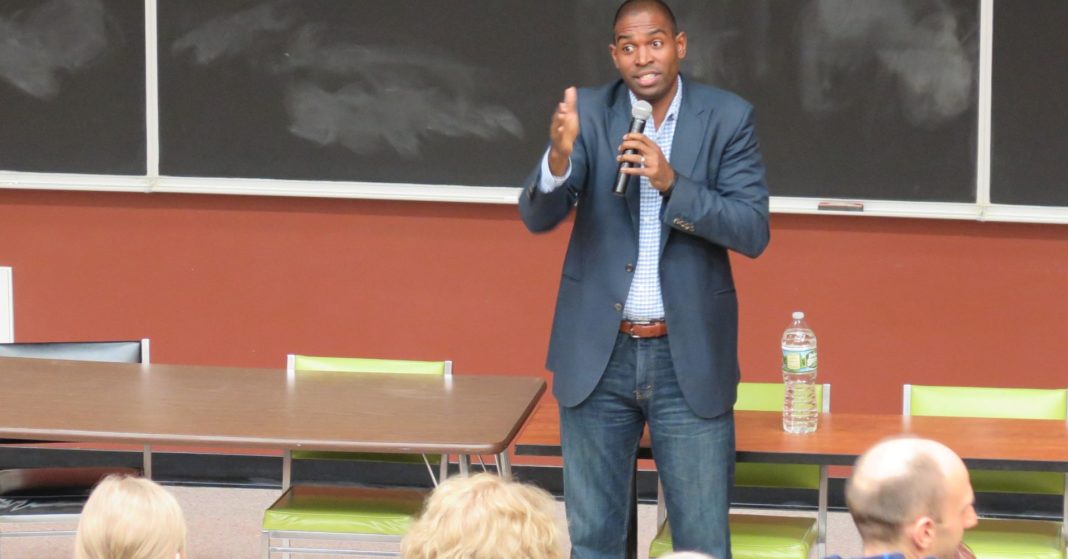 ONEONTA, N.Y. — At a town hall for Democratic House candidate Antonio Delgado on Friday, a young man stirred up the crowd with a call for a government takeover of health care.

“The answer is communism,” he shouted, sparking laughter and rebuttals from some of the dozens gathered in the State University of New York College at Oneonta lecture hall. The man added: “I’m serious.”

“I get the frustration,” responded Delgado, an attorney, former Rhodes Scholar and one-time rapper trying to win the Republican-held New York 19th District in November’s midterm election. The Democrat, who backs a so-called public option to allow anyone to opt into Medicare, urged caution and said his party needs to think about how to “move the ball.”

“All change, right, does not happen overnight,” said Delgado, a 41-year-old who aims to unseat first-term GOP Rep. John Faso.

Delgado and dozens of Democratic House candidates across the country have made health care their signature issue as they try to flip the 23 GOP-held seats needed to take control of the chamber. Their criticism of unpopular GOP efforts to dismantle the Affordable Care Act and pledges to shield popular pre-existing conditions coverage enshrined in the law have put Republican candidates on their heels in battleground districts.

The GOP has countered by arguing Democrats, even those like Delgado who do not support a single-payer system, want a radical government takeover of the health care system. In swing districts like New York’s 19th, Democrats have tried to leverage health care to their advantage while taking care not to move too far to the left on the issue and open themselves to GOP attacks.

Residents and experts in the 19th District — a sprawling, largely rural seat that encompasses a chunk of the Catskill Mountains — say it often mirrors the national political mood. The district backed President Barack Obama by 6 percentage points in 2012 before flipping to supporting President Donald Trump by 7 points in 2016.

Now, the New York district reflects the national debate over health care as Delgado and his party push to take control of the House. Delgado has tried to leverage Democratic opposition to the GOP’s Obamacare repeal plan to flip the district, even as Republicans peg him as too extreme for the seat. Both candidates have accused the other of distorting their records on health care in an increasingly heated contest.

In March 2017, in one of his first major decisions, Faso gave a critical “yes” vote as the House GOP plan to repeal and replace Obamacare narrowly passed. The Republican’s support for the bill has become a major attack point for Delgado, who on Friday accused the GOP of trying to “decimate every bit of health care we’ve got.”

Faso, 66, told CNBC he does not regret the vote. He accused Delgado of warping his record on the issue.

“No, I don’t regret it, because the Affordable Care Act has not lived up to its promise and we do need to fix it. … So I don’t regret the vote in the least,” Faso said at a Richmondville, NY firehouse as mostly older constituents ate dinner at a spaghetti fundraiser on Friday. He said he supports the Obamacare provision barring insurers from denying coverage to people with pre-existing conditions, adding that the issue is personal because his wife had surgery for cancer in the past.

While Republicans have floated plans to shield people with pre-existing conditions as they face pressure on the issue before the midterms, the proposals have potential loopholes that could jeopardize coverage, according to PolitiFact.

Faso contended that, even though Delgado “tries to mask it, he’s in essence in favor of a Medicare for all or a single payer system.” He claimed the Democrat would seek to “upend most of the existing health insurance arrangements that people in the country have.” Faso has signed on to legislation put forth by the bipartisan Problem Solvers Caucus that seeks to stabilize individual insurance markets.

Delgado has denied wanting a single payer system. His top two priorities are allowing a public option — a method that did not make it into the ACA but that advocates believe will control costs — and letting Medicare directly negotiate drug prices with pharmaceutical companies.

Faso’s defense echoes numerous House Republicans and Trump, who have downplayed the drawbacks of their plan to repeal Obamacare and stoked fears about government-run health care as they face the prospect of losing their majority on Nov. 6. Their health care plan, which would have rolled back expansion of the Medicaid program for low-income people and led to an estimated 23 million fewer Americans with insurance, sparked energetic opposition in swing districts across the country.

Numerous polls have found health care is the most important issue for voters around the country this year. It weighs heavily on minds in New York’s 19th District, as well.

Twenty-nine percent of voters there identified health care as their top issue this year, ahead of immigration, gun control or tax policy, according to a Monmouth University poll taken last month. Self-identified liberals, moderates, Delgado supporters and undecided voters listed it as their primary concern, while self-described conservatives and Faso backers ranked immigration as their main priority. The survey showed narrow leads for Delgado under three separate voter turnout models in a race top forecasters rate a toss-up.

The vast district, which covers all or part of 11 New York counties, roughly matches the rest of the country on some key indicators. It had a median household income of about $61,600 and an unemployment rate of 5 percent last year, slightly lower than and in line with, respectively, the median for all congressional districts.

The share of the population without insurance coverage was 4.9 percent in 2017, lower than the median of 7.6 percent for all districts. An estimated 22,100 people enrolled in Obamacare marketplaces in the 19th District in 2017, about in line with the median GOP-held congressional seat, according to the Kaiser Family Foundation. More than 2 million people had enrolled in Medicaid expansion in the entire state of New York as of 2016, Kaiser estimated.

Dr. Stanley Fox, a family doctor who has worked in Oneonta for nearly three decades and sees patients mostly from two of the 19th District’s counties, said he has treated more people who have coverage through Medicaid in recent years. Still, health care has become “tremendously expensive” even for many people with insurance, he added. Fox plans to support Delgado, largely because he feels Faso has not done enough to check Trump.

Otsego County, where Oneonta sits, faces problems with heart disease and diabetes, according to the county’s public health director Heidi Bond. Addiction and heroin use “continue to be one of our priorities as this affects a great number of our residents and families,” she said.

Against this backdrop, Delgado and national Democrats have hammered Faso over what they call efforts to reverse the progress made on health care in recent years. One ad from House Democrats’ campaign arm that started running last month shows Faso hugging a constituent named Andrea Mitchell as a narrator says “John Faso promised a woman with a brain tumor he wouldn’t take away her health care.”

The GOP representative took issue with the attack. He told CNBC that Mitchell is covered by Medicaid and is “not affected by this one way or the other.”

He took issue with another Delgado attack aimed at senior voters. In a TV ad, the Democratic candidate says Faso “paved the way for an age tax on seniors.” While the GOP plan would allow insurers to raise premiums for some older Americans, it would not affect New York residents due to an existing law barring insurers from charging higher rates based on age, according to PolitiFact.

Like in other races for GOP-held seats across the country, Faso has tried to push the focus away from health care. The Republican has cast Delgado as a liberal who best embodies New York City values. He contends Delgado parachuted into the district to run for Congress and does not fit the area’s values.

“That upstate-downstate cleavage is always powerful” as an attack, said Gina Keel, a professor of political science at SUNY Oneonta who identifies as a Democrat.

Ads from national Republican groups seizing on Delgado’s rap songs from 2007 have also stoked controversy in the district. One unveiled last month by House Republicans’ campaign arm calls Delgado, who is black, a “big city rapper” who supports a “radical government takeover of health care.”

Delgado and numerous fellow Democratic challengers have pushed to keep the focus on health care — while taking pains to avoid the GOP label of socialist. As he responded to the young man at the town hall event who called for a government takeover of the system Friday, he noted that progressions in civil, labor and LGBTQ rights have come gradually.

He highlighted the ACA as one incremental change for the better. Before the law passed in 2010, insurers could deny coverage to people with pre-existing conditions, he noted.

Now, “we’re almost aghast” at that prospect, Delgado said. He cast himself as the better option to prevent regression on health care.

“We almost forget that that was actually the world we lived in,” Delgado said.