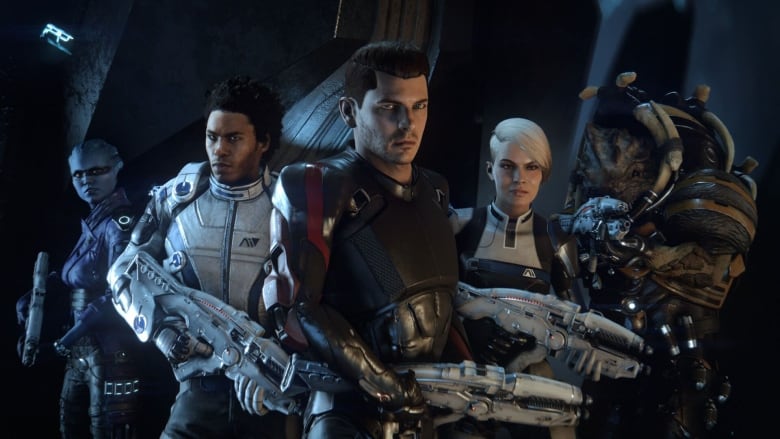 Andrew Czarnietzki is only too happy to show off physical copies of Curved Space, a 3D twin-stick shooter featuring “transtemporal spiders.”

It’s the realization of a childhood dream to one day develop his own video game.

“It was just crazy to unbox this and see this thing made manifest — and real.”

Czarnietzki is one half of Only by Midnight Ltd., an independent game studio he started with his wife, Jen Laface. Over the past few years the couple have worked jobs, raised their young child, and somehow found time to develop a video game, all from their Edmonton home.

“I find that with Edmonton, you get this atmosphere of support, which has been great,” said Laface.

Alberta’s capital is famously home to game giant Bioware, which planted roots there in 1995 and grew to prominence after a slew of highly-regarded video game blockbusters like the Dragon Age and Mass Effect series.

In more recent years, Bioware has been joined by other well-known studios like Improbable and Beamdog.

But a scene of smaller, independent game developers has grown in Edmonton’s fertile gaming soil, leveraging a ready talent pool and supportive community to create a space for hobbyists, full-time professionals and everything in between.

The Edmonton Screen Industries Office estimates there are now around 75 indie game developers in the city.

Bioware a draw for developers

It was back in 2015 during a game jam — short events where creators work individually or in teams to create games centred around a theme — that Jace Boechler first started work on the competitive fighting game Little Hellions.

With a background in web development, Boechler made the jump three years later to work full-time on the project.

Like many indie developers, part of the reason he’s stayed in Edmonton is simple: it’s home. But Boechler also sees in the city a culture of curiosity for game development.

“There are so many people who are hungry to get into game development in Edmonton, and I think that’s largely by the virtue of the presence of Bioware,” he said.

“But I think that’s just the diving off point — I think there’s so much more that we have here that people don’t actually know about.”

GameCamp Edmonton is a game development organization that aims to connect creators and help them network and learn, something it’s done for more than a decade. Before the pandemic it held monthly meet-ups where it invited local talents to share their expertise.

Vanessa Capito, also an associate producer at Beamdog, is one of the group’s organizers.

“Edmonton and Alberta, I think they’re special in that we still have a relatively small community, but it’s been very welcoming and open.”

She says game jams have been a great way for people to collaborate and build up a portfolio.

“I love our community,” Capito said. “When I first joined six years ago, I was just a shy student who was just wowed that we had something like this here in Edmonton.”

The Edmonton Screen Industries Office was established in 2017 to support the development of screen media projects. From its inception, the economic development organization has included video games under its wide-ranging purview.

“I think we’re seeing continued growth, and I expect that we will continue to do that,” said CEO Tom Viinikka. “Our hope and our goal in our office is to foster that growth.”

The screen industries office aims to connect creators and offers information and workshops for developers. It provides some granting opportunities — it is currently taking applications for $1,500 micro grants to help with third-party costs during a project’s initial planning phase.

I love our community. When I first joined six years ago, I was just a shy student who was just wowed that we had something like this here in Edmonton.​​​– Vanessa Capito, Beamdog associate producer and GameCamp organizer

Viinikka said there are a number of ways that Edmonton is well-suited to the indie development scene.

“Edmonton is an amazing place to do business in general,” he said. “I think that we have a really entrepreneurial spirit in this city.”

Bioware’s presence has seen indie studios started by former employees while post-secondary institutions in Edmonton have been forward-thinking, Viinikka said, referencing the University of Alberta’s certificate in computer game development and NAIT’s digital media and IT program.

“We need to feed this talent pipeline and they’ve done a wonderful job of that.”

A 2019 report by the Entertainment Software Association of Canada found that Canadian video game companies generated an estimated $3.6 billion in revenue. Despite the pandemic, global video game revenue was forecasted to rise to $175 billion for 2020.

When Kyle Kulyk lost his job in finance during the 2007 financial crisis, he went back to school to study game programming at NAIT before starting his own video game company, Itzy Interactive.

Opportunities for smaller indie studios have been made possible by a global shift in video game distribution in recent years — digital platforms now offer the chance to get more games out to the masses.

Game engines — software frameworks for games — were previously the purview of big studios, but Kulyk says they’ve become more user-friendly and reasonably-priced. At the same time, major console-makers like Sony and Nintendo opened up their digital distribution platforms to indie games.

“Things turned around the last console generation, over the last 10 years or so,” he said.

Itzy Interactive started in mobile games but has since turned to console and computer platforms. In May it published its fourth title, the co-op arcade shooter Mad Devils.

Funding can be challenging

Kulyk readily admits that the reality of the industry can be harsh for indie game studios vying for attention in a more accessible market.

“It’s certainly not for the faint of heart in terms of the commitment that it takes to get there,” he said.

“We wouldn’t exist right now if it wasn’t for the Canadian Media Fund.”

The fund develops and finances Canadian content across audiovisual media — one funding source for projects that can require long, irregular hours without any guarantee of a pay off.

Alberta previously offered a Digital Media Tax Credit, which was viewed as a major boon for the game development industry, but the provincial government eliminated the credit in 2019.

Kulyk’s small indie studio has still managed to grow from just him and his brother-in-law to a team of four full-time employees, resulting in a collaborative creative effort he finds rewarding.

“To put these ideas out there to my team and then to see where we end up at the end of the day is so much more to me than selling mutual funds ever was.”