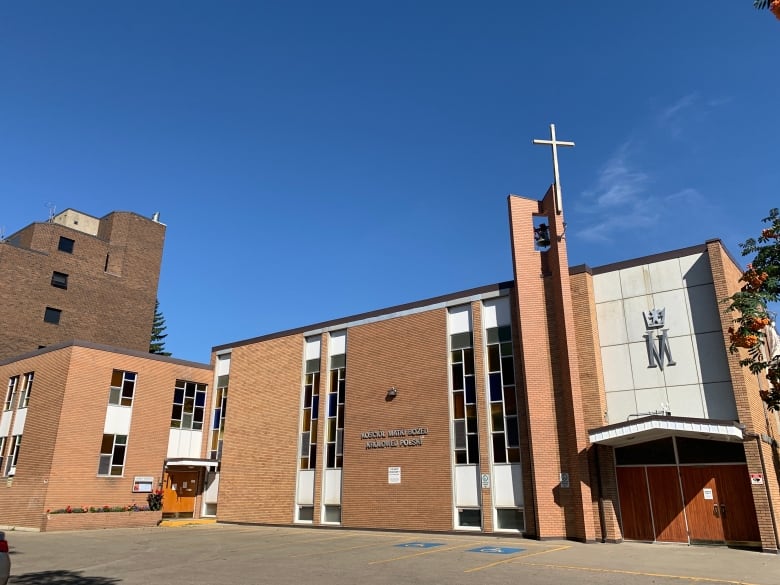 A Catholic priest in Edmonton is apologizing after calling reports of unmarked graves at former residential schools “lies” last month.

Rev. Marcin Mironiuk said in services at Our Lady Queen of Poland Parish on July 18 that discoveries of mass graves at residential school sites were “lies” and “manipulation.”

Video footage of him speaking during and after masses that day was broadcast on YouTube, but has since been removed. Vice World News first reported on and shared excerpts of the recording on Wednesday.

“We are in the presence of lies here in Canada,” Mironiuk said in Polish during the recording.

“There were reports stating why these children were dying. They were dying from natural causes and were buried in regular cemeteries, and that’s why we’re living now in a great lie.”

Mironiuk also said he asked to see “mass graves” at a residential school site during a trip to Kamloops, B.C., without disclosing he was a priest, and was told he couldn’t because the area is a sacred place.

He brought up the graves of murdered Polish Jews in the town of Jedwabne during the Second World War as a comparison.

Though historians have concluded Polish Jews were murdered by their Christian neighbours there in July of 1941, Mironiuk called this “a great lie” and claimed German Nazis were to blame.

“The Jewish community raised [the] alarm that this is a sacred ground, so you can’t dig there, right?” he said.

Comments ‘cannot be justified in any way’

When reached by phone for comment Thursday morning, the parish referred CBC News to the Catholic Archdiocese of Edmonton.

A spokesperson said the Archdiocese was made aware of Mironiuk’s statements on Tuesday and immediately requested an apology, which the priest delivered to Edmonton Archbishop Richard Smith through the vicar-general of the Archdiocese that day.

A statement released Wednesday from the Archdiocese said Mironiuk “apologizes unequivocally and expresses deep regret for those statements,” and that Archbishop Smith has accepted the apology.

The statement also said Mironiuk’s comments “cannot be justified in any way.”

“Moreover, the statements have caused further pain to residential school survivors, the Indigenous community, and all Canadians at a time when we are trying to come to terms with the legacy of residential schools and the Church’s involvement in them,” it read.

Do you know of a child who never came home from residential school? Or know someone who worked at one? We would like to hear from you. Email our Indigenous-led team investigating the impacts of residential schools at: wherearethey@cbc.ca or call toll-free: 1-833-824-0800.

The spokesperson told CBC News the Archdiocese received letters about Mironiuk’s comments and is currently discussing the priest’s future and further actions with his Polish superiors, the Oblate Fathers of Assumption Province.

The Edmonton Archdiocese said Thursday that a decision on further discipline for Mironiuk would likely be announced Friday morning.

‘We cannot deny what happened’: elder

“Obviously the man is not well-versed on Indigenous peoples and the residential schools,” said Elder Fernie Marty, a practising Catholic who attends the Sacred Heart Church of the First Peoples in Edmonton.

“We cannot deny what happened, and the quicker we recognize it for what it is and deal with it to the best of our abilities, the better off we are,” he said.

In a 2015 report, the Truth and Reconciliation Commission identified more than 3,000 residential school deaths, and using Statistics Canada data, showed that until the 1950s, Indigenous children in residential schools died at a much higher rate than children outside the schools.

“I am absolutely appalled and everybody I’m associated with has similar feelings [about Mironiuk’s comments],” said Joanna Ciapka-Sangster, one of four producers of Nasze Radio Canada, a Polish radio program on CJSR in Edmonton.

Mironiuk will apologize during masses on Sunday, the Archdiocese spokesperson said.