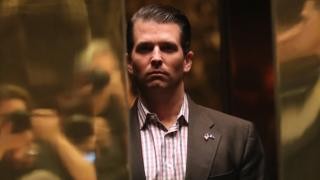 Donald Trump Jr said he met Natalia Veselnitskaya but that “no meaningful information” on Mrs Clinton was shared.

Also at the meeting in 2016 was the president’s son-in-law Jared Kushner and then-campaign head Paul J Manafort.

US officials are investigating alleged Russian meddling in the US election.

The FBI and Congress are both looking at whether Trump campaign officials colluded with the alleged Kremlin plot. The inquiries have yet to show evidence of collusion.

It is thought to be the first confirmed private meeting between a Russian national and a member of US President Donald Trump’s inner circle.

The New York Times first reported the meeting on Saturday. At the time, both Mr Trump Jr and Ms Veselnitskaya confirmed the meeting but said the US presidential campaign was not discussed.

On Sunday, the New York Times said that Mr Trump Jr had agreed to the meeting after being offered information that would potentially prove detrimental to Mrs Clinton, who was Democratic presidential candidate at the time.

The New York Times cited three White House advisers briefed on the meeting, and two others with knowledge for it, as its sources.

In a statement on Sunday, Mr Trump Jr said an acquaintance had asked him to meet “an individual who I was told might have information helpful to the campaign”.

“I was not told her name prior to the meeting. I asked Jared [Kushner] and Paul [Manafort] to attend, but told them nothing of the substance.”

“After pleasantries were exchanged, the woman stated that she had information that individuals connected to Russia were funding the Democratic National Committee and supporting Mrs Clinton.”

“Her statements were vague, ambiguous and made no sense. No details or supporting information was provided or even offered. It quickly became clear that she had no meaningful information,” he added.

Mr Trump Jr said Ms Veselnitskaya then moved the conversation to a suspended programme for Americans to adopt Russian children.

“It became clear to me that this was the true agenda all along and that the claims of potentially helpful information were a pretext for the meeting.”

There was no immediate comment from Mr Kushner and Mr Manafort.

A spokesman for President Trump’s legal team said on Sunday that the president was “not aware of and did not attend” the 2016 meeting between Mr Trump Jr and Ms Veselnitskaya.

President Vladimir Putin suspended the adoption programme cited by Mr Trump Jr in 2012 after the US Congress voted in a law to allow the US to withhold visas and freeze financial assets of Russian officials thought to have been involved with human rights violations.

Ms Veselnitskaya, who played a key role campaigning against the law, said on Saturday that “nothing at all was discussed about the presidential campaign.”

US intelligence agencies believe Moscow tried to tip the election in favour of Mr Trump – claims the Russian government has denied.

Last week Mr Trump said interference in the election “could well have been” carried out by countries other than Russia and interference “has been happening for a long time”.