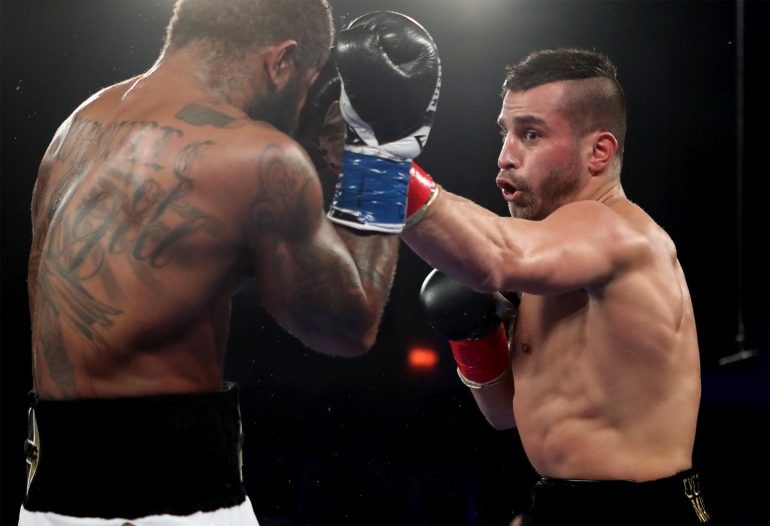 Featherweight contender Joseph Diaz Jr. and Jorge Lara will put their undefeated records on the line with a chance to earn a world title shot.

Diaz, a 2012 U.S. Olympian, and Lara will square off in a world title elimination bout on Sept. 16 (HBO PPV, 8 p.m. ET) in the co-feature of the Canelo Alvarez-Gennady Golovkin middleweight world championship fight at T-Mobile Arena in Las Vegas, Golden Boy Promotions announced on Monday.

The winner of the bout will become the mandatory challenger for 126-pound world titleholder Gary Russell Jr. (28-1, 17 KOs).

“It’s a dream come true to be fighting in the co-main event of the Canelo versus Golovkin card,” Diaz said. “I finally get the opportunity to fight for a title eliminator. I’ve been waiting my whole life to become a world champion. On Sept. 16, I’m going to give it everything I got, for all my fans out there.”

Diaz (24-0, 13 KOs), a 24-year-old southpaw from South El Monte, California, has been a regular on Golden Boy’s major cards. He will be fighting on his third consecutive Alvarez undercard. He also boxed on the undercard of Bernard Hopkins’ career finale in December.

Lara (29-0-2, 21 KOs), 26, of Mexico, collected his biggest win in April 2016, when he scored four knockdowns en route to a first-round destruction of countryman Fernando Montiel, a former three-division world titleholder.

“I haven’t seen too much of Diaz, but I know that he’s a tough opponent,” Lara said. “I also know that he participated in the 2012 Olympic Games in London. More than anything else, I know that we have to give a great fight, and I hope that he throws punches and brawls.”

Golden Boy also announced the rest of the undercard.

“I am so happy and grateful for the opportunity that Golden Boy Promotions has given me,” said Caballero, 26, of Coachella, California. “I promise to all my friends, family and fans that I will put on a great performance come Sept. 16.”

The match marks a major step up in competition for De La Hoya, 23, of Mexico, one of boxing’s top prospects.

“I’m very motivated and excited for another great opportunity on the biggest boxing event in some time,” De La Hoya said. “Fights like this one versus Caballero are what bring out the best in me, and I guarantee I will give it my all to put on a great show for the fans.”

“I realize there are a lot of big fights that can be made right now in the lightweight division,” Martin said. “There are lot of projections and talks for me to be a part of some of those bigger fights. But right now, I have to get past Rojo. Preparations are going good, and I will be as sharp as ever on that night. My team is amazing, and my trainers are pushing me really hard.”

Tom Loeffler, who promotes Golovkin and Martin, offered his assessment.

“Ryan Martin is one of the fastest-rising stars of the lightweight division,” Loeffler said. “This battle between two hungry top-10 contenders is a great addition to the card and an exciting way to open the pay-per-view telecast.”

Rojo will come into the fight riding an eight-fight winning streak, but he is taking on a highly regarded prospect.

“The Canelo versus Golovkin undercard will feature some of boxing’s best contenders and rising stars. The fans will be in for a treat,” Oscar De La Hoya said. “From ‘Jo Jo’ Diaz to Randy Caballero, Diego De La Hoya, Vergil Ortiz and Marlen Esparza, Golden Boy Promotions has stacked the undercard with some of the toughest fighters in the sport today that are determined to put on great fights for the fans.”