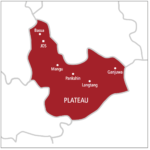 The Plateau Government is to organise a novelty football match between the executive and the legislature and a golf kitty to mark the 2017 Democracy Day.

The Commissioner for Information, Mallam Muhammad Nazif, made this disclosure on Friday in Jos at a news conference while highlighting the activities slated for the day.

Nazif said that the football match would hold on Saturday at the New Zaria Road Stadium by 3:30 p.m. while the golf kitty would take place on Monday by 7: a.m. at Lamingo Golf Club, JUTH Road Jos.

According to him, the match and the golf kitty are meant for those who are still young and have been certified fit by their doctors.

“Those who are old like myself are not going to participate in that match and we are very much careful as all other arrangements have been concluded,” he stated.

“The sports events were included in the Democracy Day programme to enable the officials of the two arms of government mingle informally and also keep fit.

“Other activities slated for the day include; a Juma’at prayer at Jos Central Mosque on Friday and a thanksgiving service at the Government House Chapel on Sunday.

“There will be a state banquet on Sunday evening at Eliel Centre, Jos while a town hall meeting will hold on Monday morning at the Government House Banquet Hall,’’ he said.

The commissioner stated that there would also be a media interaction with newsmen on Monday evening to intimate them with Gov. Simon Lalong’s activities and achievements in the last two years.

Nazif told newsmen that the governor would in the first week of June, hold town hall meetings in the other two senatorial districts and also commission projects he had executed.

It will be recalled that a member of the state Executive Council, Mr Samuel Galadima, the Commissioner for Urban Development, slumped and died on March 22 during an early morning exercise.