They do! Country singer Kane Brown married his fiancée Katelyn Jae in Nashville on Friday, October 12, Us Weekly can confirm.

“The happy couple tied the knot outside of Nashville this weekend after celebrating earlier in the week with his three American Music Award wins,” the singer’s rep tells Us.

“BIG WEEK,” Brown tweeted on Saturday, October 13, after the nuptials. He also showed off a new tattoo of his wife’s name on his hand on his Instagram Story on Saturday, while Katelyn shared a video of friends competing in an inflatable obstacle course as the wedding celebrations continued over the weekend. 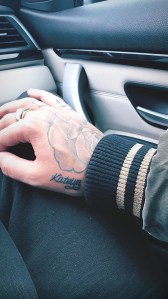 The “Used to Love You Sober” singer announced their engagement during a show in Philadelphia in April 2017.

“It’s hard to do this job — you know, there’s girls involved — you’ve got to stay out of trouble, it’s really hard,” the 24-year-old said in a video shared on Twitter by a fan at the concert before revealed that he had “just got engaged to a girl from Philadelphia two days ago.”

In a note posted to his social media accounts in January 2017, he referred to Katelyn, a singer, as “my other half.”

“I know a lot of people might get mad I’m in a relationship but if you’re a true fan u won’t,” he wrote. “She keeps me sane, she keeps me happy she’s my girl.”

I know a lot has been going good for me this past year, but being away from my family and friends it’s been tough….

The “What Ifs” singer told Taste of Country in September 2017 that his fiancée was doing most of the wedding planning. “I don’t really have any input because I’m the type of person … I put my tux on [and] as long as you’re in front of me, I don’t care what’s there,” he said. “I let her do it.”