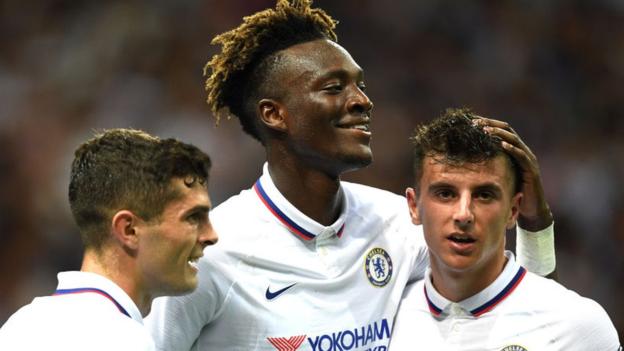 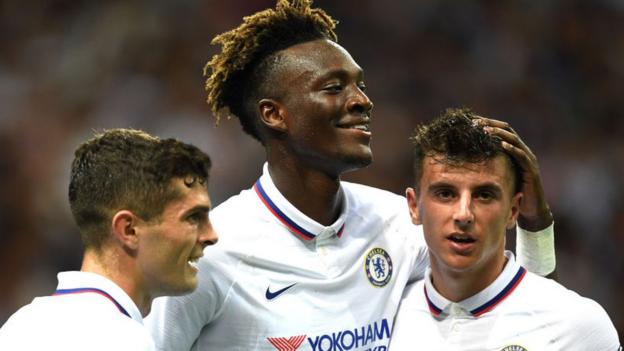 Goals from Tammy Abraham and Ross Barkley gave Frank Lampard’s Chelsea an impressive 2-1 win against Barcelona in a pre-season friendly in Japan.

Abraham opened the scoring with a neat first-half finish after rounding the goalkeeper, and substitute Barkley curled in a second late on.

The former Atletico Madrid striker showed some good touches and linked up well with Ousmane Dembele, who is reportedly set to leave Barcelona this summer, but never really troubled Kepa in the Chelsea goal.

Midfielder N’Golo Kante was absent from the Chelsea squad for the game and Lampard revealed afterwards that the 28-year-old France international had already returned home because of a knee injury.

“It was a decision that I made because I felt that him being here, with the facilities and the moving and travel that we have been doing, it probably wasn’t the most beneficial for him.

“Hopefully by the time we get back at the end of the week I will sit down with the doctor and hopefully he will be back with us very soon.”

Pulisic puts on a show as Blues youngsters impress

Lampard gave Christian Pulisic a first start for the Blues and the 20-year-old American forward caught the eye with his pace and trickery.

He got the better of the Barcelona backline on a number of occasions, breezing past defenders to set up a couple of chances, although his finishing failed to match the rest of his game.

But he was not the only one of Chelsea’s young players to impress.

Abraham recovered from a shocking miss at the start of the game, when he fired over from four yards, by showing a striker’s instinct for the opener, reacting quickly to a deflected clearance and then rounding Barcelona’s experienced keeper Marc-Andre ter Stegen.

Meanwhile, Mason Mount, who scored 14 goals while playing under Lampard on loan at Derby last season, did not look out of place.

Playing just behind Abraham, Mount linked up play well and showed he was not afraid to shoot against illustrious opposition with a decent drive that flew just over.

While Griezmann did not mark his Barcelona debut with a goal, coach Ernesto Valverde was impressed with the forward’s contribution.

“He needs to get used to the team and how we play,” said Valverde.

“But he proved himself as a dangerous player on the ball. He has a lot of ideas.

“This is only his debut game. He will have to fit into Barca’s style. I am sure he will become better and better.”