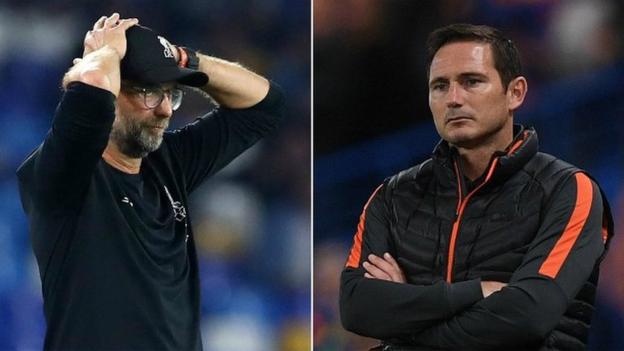 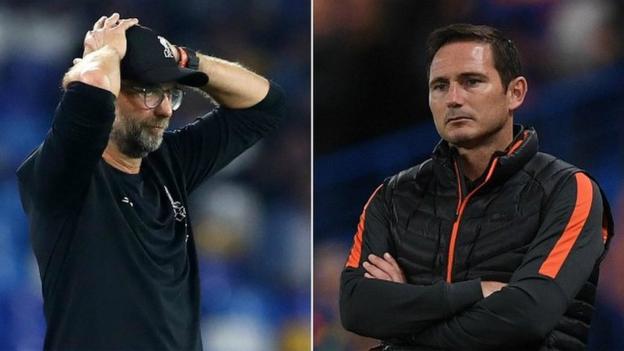 Liverpool boss Jurgen Klopp and Chelsea manager Frank Lampard were both left to reflect on key penalty incidents as they began their Champions League campaigns with defeats.

Ross Barkley missed a late chance to equalise for Chelsea from the spot as they lost 1-0 at home to Valencia.

Meanwhile, Napoli’s first goal in their 2-0 win over holders Liverpool came from a dubious spot-kick.

“For me it’s clear and obvious, no penalty,” said Klopp.

German referee Felix Brych pointed to the spot with eight minutes left when Andy Robertson was judged to have fouled Jose Callejon.

Dries Mertens converted the spot-kick before former Tottenham striker Fernando Llorente sealed the win with a second goal in stoppage-time.

“Callejon jumps before he has any contact,” added Klopp. “But we cannot change that so we have to be critical with ourselves.

“We did well in a lot of moments, we played a lot of good football but we didn’t finish off.”

‘I don’t know what the conversation was’

Chelsea boss Lampard was also left to rue a key penalty incident when he saw Barkley’s late effort clip the top of the bar.

There were confusing scenes moments earlier when it initially looked like Jorginho, who scored for Chelsea in their Super Cup defeat to Liverpool last month, was about to take the penalty.

However, Barkley was insistent and ended up taking the ball after discussions with several of his team-mates including Brazilian captain Cesar Azpilicueta.

“Ross is a penalty taker,” said Lampard. “He scored a couple in pre-season and he was today when he came on and he missed it.

The miss capped a frustrating night for Chelsea, who also saw midfielder Mason Mount forced off with an ankle injury during the first half.

“We probably should have won, or at least got a draw,” added Lampard. “We created enough chances, we had the penalty, and we conceded with their one shot on goal.

“It’s a harsh lesson but that’s Champions League football. We should have got more tonight.”

‘They’ve killed everybody on the pitch’

Like Lampard, Klopp felt his side deserved at least a point, with defeat meaning they are the first winners of the competition to lose the opening game of the following campaign since AC Milan in 1994.

“This was a much better game than we played last time when we lost 1-0 in the last minute [to Napoli last season],” said Klopp. “It was an open game, in moments we controlled the game, but we had a lot of counter-attacks and didn’t finish them off.

“That’s a problem. Then in the second half we had this wild game, we were running, they were running. They’ve killed everybody on the pitch, started controlling again and then we’ve conceded a penalty. Of course that doesn’t help and I’ve seen it now, I don’t think that’s a penalty.”

Despite the defeat Lampard is confident his side can progress from the group, though he wants his side to bounce back quickly when they host Liverpool in the Premier League this weekend.

“That is the reality of the Champions League. It means the next two games against Lille and Ajax are more important, particularly being back to back away from home,” said the former England midfielder.

“We will have strong focus on those games to try to get a result but in context it is one game done in a group where teams will take points off each other. There is no reason to be too downbeat now.

“It wasn’t a bad performance tonight. Liverpool are the best team in the country on form and we have to be ready for it.”